Written by Gil Tene of Azul Systems, and released to the public domain as explained at http://creativecommons.org/publicdomain/zero/1.0

jHiccup can be executed in one of three main ways: 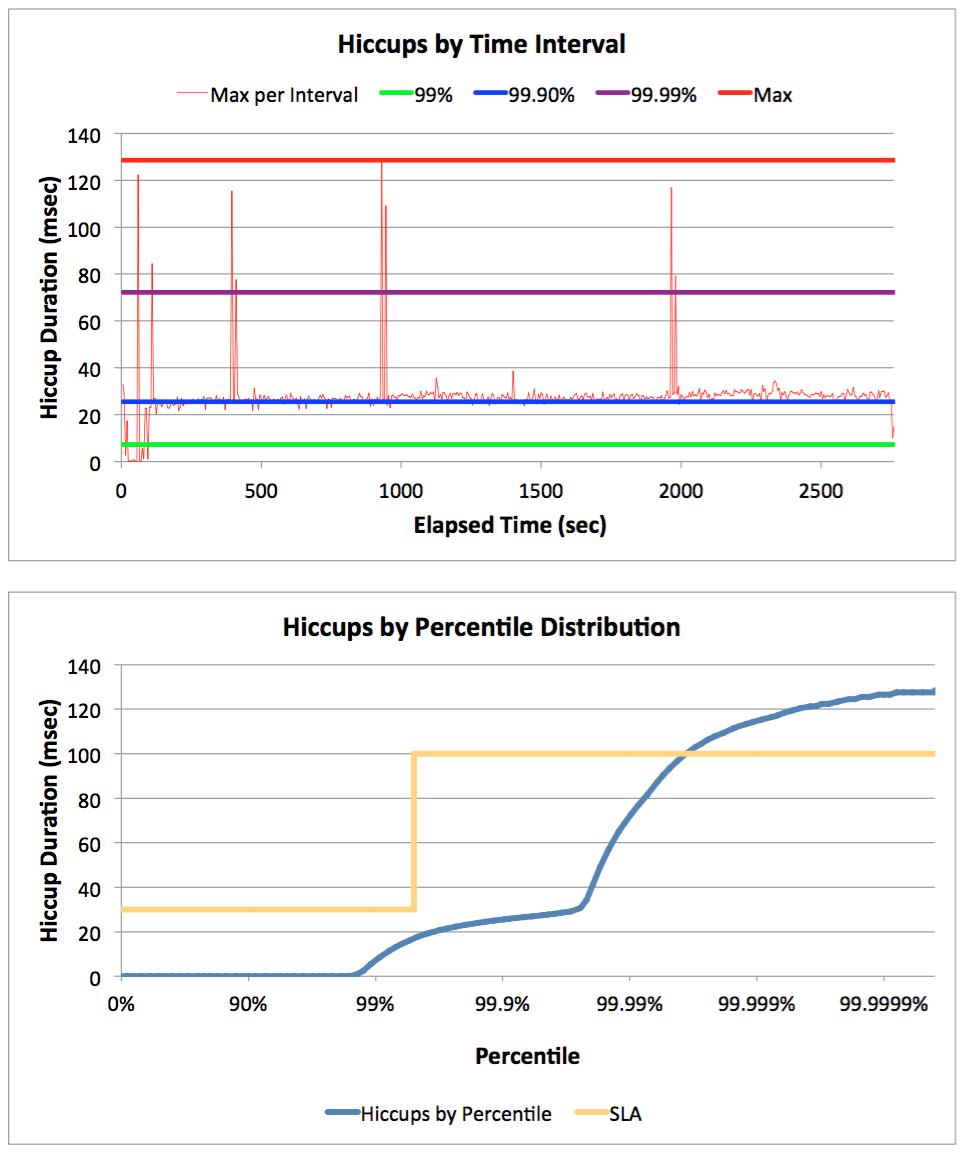 Using jHiccup as a Java agent:

jHiccup.jar can be used as a Java agent using the following launch syntax:

You can find the available options for the Java agent mode by running:

Here is a Java agent usage example with explicit parameters:

This example will record hiccups experienced during the running of MyProgram.jar in log file hiccuplog, while at the same time recording the hiccups experienced by a control process running in a separate JVM in the log file c.hiccuplog. Measurement will start 2 seconds after startup (rather than immediately), and interval data will be recorded every 1 second (rather than the default 5 seconds).

Note 1: When used as a java agent, jHiccup will treat spaces, commas, and semicolons as delimiting characters ([ ,;]+). For example, the option string -d 0 -i 1000 is equivalent to the option string -d,0,-i,1000. This is useful for environments where placing space delimiters into quoted strings is difficult or confusing.

Note 2: I find that a common way people add jHiccup as a Java agent is by using the _JAVA_OPTIONS environment variable. This often allows one to add the jHiccup Java agent without significant launch script surgery. For example:

jHiccup logs hiccup information in a histogram log (see HdrHistogram.org). This histogram log contains a full, high fidelity histogram of all collected results in each interval, in a highly compressed form (typically using only ~200-400 bytes per interval). However, other than the timestamp and maximum hiccup magnitude found in the given interval, the rest of the log line for each interval is not human readable (it is a base64 encoding of a compressed HdrHistogram).

To translate the jHiccup log file to a more human-readable form, the jHiccupLogProcessor utility is provided. In it's simplest form, this utility can be used as such

jHiccupLogProcessor can also be used to produce log files for an arbitrary section of the jHiccup log, by using the optional -start and -end parameters.

Launching jHiccup by attaching it to existing, running application:

The jHiccup agent can be injected into a live, running Java application if the environment supports the java attach API (which is typically available in java environments running Java SE 6 or later).

NOTE: In order to attach to a running java application, the running application needs to have ${JAVA_HOME}/lib/tools.jar in it's classpath. While this is commonly the case already for many IDE and desktop environments, and for environments that involve or enable other attachable agents (such as profilers), you may find that it is not included in your application's classpath, and that it needs to be added if attaching jHiccup at runtime is needed (launching jHiccup as a Java agent per the below may be a good alternative).

In the wrapper script form, all it takes is adding the word "jHiccup" in front of whatever the java invocation command line is.

For example, if your program were normally executed as:

The launch line would become:

or, for a program launched with:

The launch line would become:

or, to override the defaults by making the recording start delay 60 seconds and log to hlog, it would become:

The jar file also includes a simple "Idle" class to facilitate sanity checks without an external program. Here is a simple sanity test example: jHiccup with a 4 sec delay on recording start, wrapping an Idle run that does nothing for 30 seconds and exits:

The jHiccup command is expected to work and has been tested on the following platforms:

jHiccup.jar is expected to work as a java agent and has been tested on the following platforms:

If you use jHiccup on other operating systems and setups, please report back on your experience so that we can expand the list.

It is often useful to compare the hiccup behavior experienced by a running application with a "control" hiccup level of an idle workload, running on the same system and at the same time as the observed application. To make such control measurement convenient, jHiccup supports a -c option that will launch a concurrently executing "control process" and will separately log hiccup information of an idle workload running on a separate jvm for the duration of the instrumented application run. When selected, the control process log file name will match those used for the launching application, followed with a .c.

When a log file name is specified with the -l option, the terms %pid, %date, and %host will be filled in with the appropriate information. The default log file name setting is simply hiccup.%date.%pid.

jHiccup's main HiccupMeter class supports a mode -f that will take latency input from a file instead of recording it. This is useful for producing jHiccup-style text and graphical output for recorded latency data collected by some other means.

When provided to the -f option, an input file is expected to contain two white-space delimited values per line (in either integer or real number format), representing a time stamp and a measured latency, both in millisecond units.

It's important to note that the default "expected interval between samples" resolution in jHiccup and HiccupMeter is 1 millisecond. When processing input files, it is imperative that an appropriate value be supplied to the -r option, and that this value correctly represent the expected interval between samples in the provided input file. HiccupMeter will use this parameter to determine whether additional, artificial values should be added to the histogram recording, between input samples that are farther apart in time than the expected interval specified to the -r option. This behavior corrects for "coordinated omission" situations (where long response times lead to "skipped" requests that would have typically correlated with "bad" response times). A "large" value (e.g. -r 100000) can easily be specified to avoid any correction of this situation.

When run in the file injection mode (-f), jHiccup's main HiccupMeter class supports an optional "fill zeros" (-fz) mode. This mode is useful for processing input that represent pause events rather than latencies.

A common use case for this feature is producing hiccup logs from GC logs. GC logs will generally include pause information, which can be parsed out to a "pauses log". jHiccup can takes a "pauses logs" as input

When provided to the -f option, in conjunction with a -fz option, an input file is expected to contain two white-space delimited values per line (in either integer or real number format), representing a time stamp and a measured length of a pause, both in millisecond units.

jHiccup depends on and makes systemic use of HdrHistogram to collected and report on the statistical distribution of hiccups. HdrHistogram sources and documentation can be found on GitHub, at http://hdrhistogram.github.io/HdrHistogram/

jHiccup can be (re)built from source files using Maven: