CHIP-8 is an interpreted programming language, developed by Joseph Weisbecker. Initially used on the COSMAC VIP and Telmac 1800 8-bit microcomputers in the mid-1970s, it allowed video games to be easily programmable. 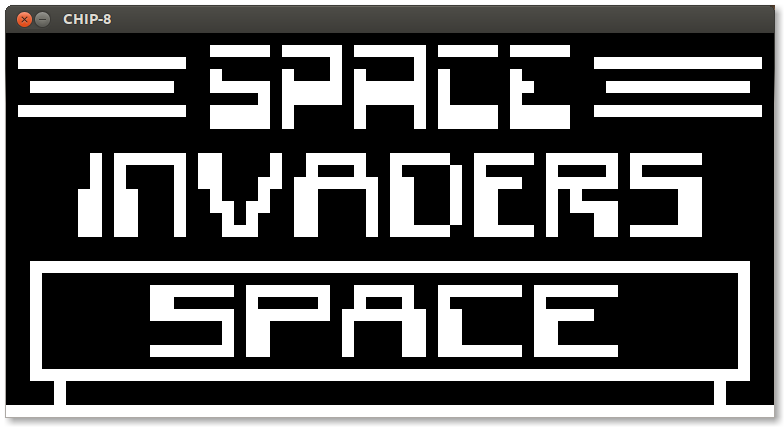 The project uses CMake as a build system and has the following dependencies:

To build the project, be sure to have CMake installed and run:

However, running cmake . at the project root directory will result in a lot of cruft files needed by the CMake build process. If you plan to hack on the project, a better idea is to run:

That will keep the CMake specific files in a convenient location, so they can be easily pruned. Once make has been run, use sudo make install to install it.

Installing source packages with make install is not always a great idea. If you are running some Unix flavour you may want to utilize your system packaging tools. An utility named CheckInstall is pretty convenient in those situations. You can use it to generate and install a package, that is suitable for you. This package will be named chip8.c and will be easily uninstallable through your package system.

I’m going to guide you through the process of installing CheckInstall on Ubuntu Linux. The process will be similar for other Linux distributions or your favorite Unix-like operating system.

On Ubuntu Linux CheckInstall is not installed by the default and you can install it with:

Asuming that you have already built the project in the build directory, run:

Just follow the instructions and if everything went successful, you should see a message like the following:

SDL is the default backend, you don’t need to explicitly specify it. It uses the SDL library to display the CHIP-8 graphics and feed it with input from the keyboard.

The CHIP-8 uses a hexadecimal keyboard, which maps rather well to the layout of the current generation keyboard numeric pad.

Use following keys to reset or quit the emulator.

This is the only backend that supports input.

The terminal backend uses escape symbols to render dynamic content straight to the terminal. It requires a terminal that is at least 64×32 to render the content correctly.

The ncurses backend uses the ncurses library to display dynamic content to the terminal. It is faster than the --terminal backend, but requires the use of an external (ncurses) library.

The following games are distributed with the interpreter:

You can find them in the roms folder.

The code is available under the MIT license.