A custom iOS UI control to point at things.

A custom iOS UI control which allows display of an arrow image to point at arbitrary locations in a window at arbitrary angles and lengths.

I created the CEGuideArrow class for an unlaunched side-project in which I wanted to step through a short tutorial in the app. I needed a flexible way to guide the user along and point at the next steps along the work flow. Thus, CEGuideArrow was born, and now I'm giving it to the world.

You can view a quick video demo of the guide arrow at work in the CEGuideArrow Demo YouTube Video.

There is a demo XCode project included with this repo to demonstrate use of the class. 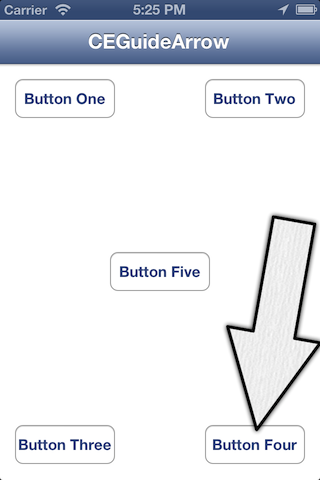 There is not much in the way of documentation yet (maybe ever?), but the demo project demonstrates most of the class's capabilities in simple code

I'm old school. You can very happily and easily integrate non-ARC code into ARC projects using the -fno-objc-arc flag in the "Compile Sources" step of the project "Build Phases" - any pull requests or issues asking to integrate ARC will be rejected with prejudice.

Want to contribute and make CEGuideArrow even better? Great! Send a pull request my way, and I'll check it out.

A custom iOS UI control to point at things.