DISCLAIMER: This project is still experimental and has not been thoroughly tested.

This project uses the Netty framework as the transport layer for JGroups. This is developed by Master’s students from Newcastle University as part of their final project under the supervision of Bela Ban.

The JGroups protocol configuration using Netty can be found in netty.xml. The XML file can then be used as the -props field in JGroups. By default use_native_transport is set to false however setting it to true will require a Unix system to work. If the native system is used then then the required tools and libraries must be installed. Instruction for that can be found here.

Running ./build.sh will do a maven clean install and copy the dependencies. run.sh will include the dependencies as part of the java classpath argument and can be used to run JGroups.

The JGroups protocol is implemented in Netty.java which will manage TCP communication to other peers. To understand how this transport layer works, only 2 classes needs to be understood Netty.java and NettyConnection.java

This class is an extension of TP and provides all the details in order for the JGroups stack to integrate with Netty. Netty.java will create a NettyConnection by passing an instance of NettyReceiverListener which has callbacks for onReceive and onError. These methods are fired when a message is received or when an error has been thrown by Netty.

One of the limitations with Netty is the use of the client-server model. This creates a challenge where a P2P model is required. So each NettyConnection will have instances of both server and a client. The client will initiate requests and the server will receive incoming requests. To avoid a N * (N-1) connections, we implement a lookup table that checks to see if a connection is already made to a well known address and reuse the channel if there is a connection established.

See encoding and decoding in the wiki.

Netty seems to increase performance by 14% with a lower thread count and an exponentially increasing payload size but with a higher thread count and increasing cluster size, Netty seems to perform worse. Interestingly in both tests, at 23 nodes, the expected trend does not follow as there is only a small margin of performance increase in the first test and an 11% decrease in performance in the second test. More performnace testsing are on the way.

The following versions were used to measure the throughput of both TCP and Netty.

This test was run with a maximum of 200 and 500 thread per node and repeated 3 times. Unfortunately due to the huge amount of resources required at 45 nodes and 500 threads, the 1MB payload test did not work and so the results are omitted from the graphs and table. 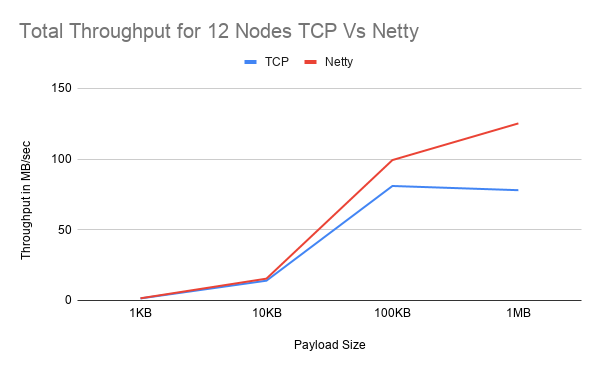 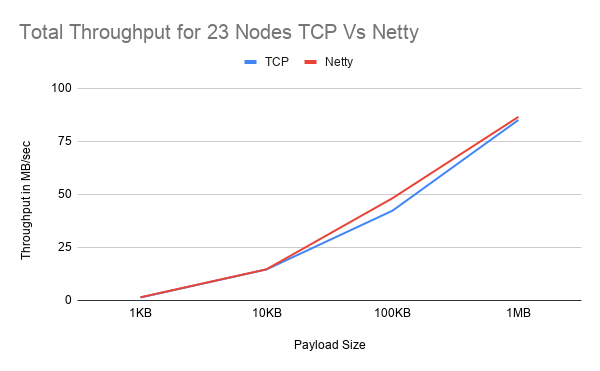 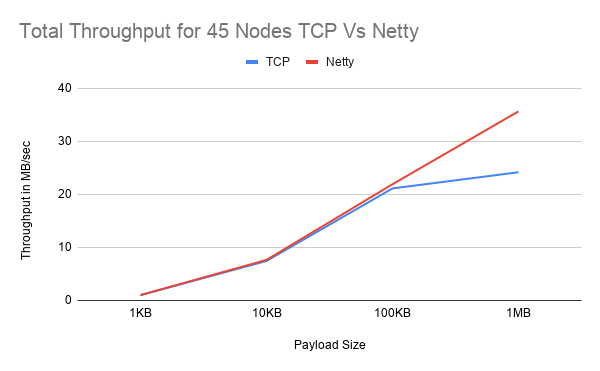 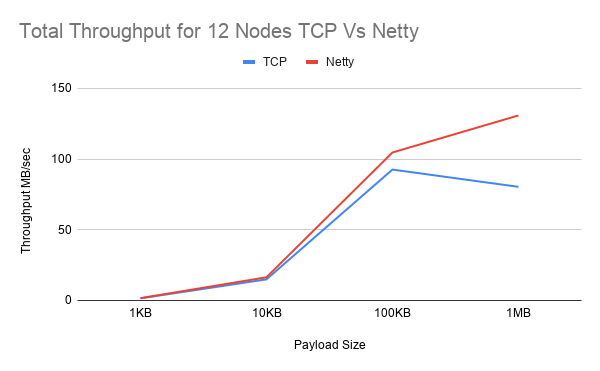 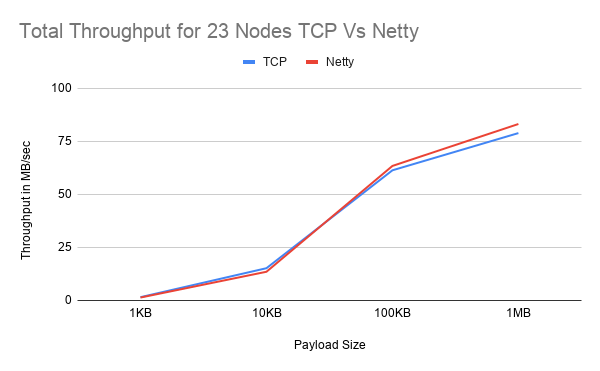 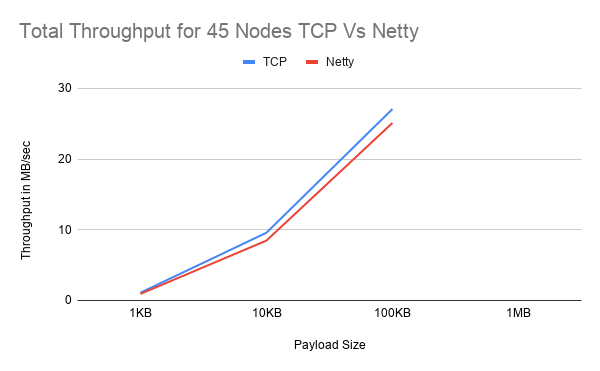 The following tables show the performance difference between TCP and Netty. To calculate the differences the formula shown below was used. The average throughput for each payload and all clusters are shown below.