NO LONGER UNDER DEVELOPMENT

This library is no longer supported. If you're looking for an amazing alternative, try Postal. It does everything I ever hoped this library would do and more and is a far more robust solution. 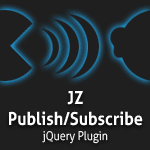 jQuery has been accused of making us bad JavaScript programmers because it makes it so easy to just throw a plethora of anonymous functions in as callbacks to a plethora of event handlers. This plugin was made in response to those accusers and is offering a means to start being a good JavaScript programmer again by making it simple to use common design patterns to decouple and organize our code. The design pattern this specifically simplifies is the Publish/Subscribe pattern which is essentially equivalent to the Observer pattern. This implementation is very lightweight, simple, and powerful. Use it to your advantage. If you experience any bugs, please report them as an issue on GitHub.

JZ Publish/Subscribe is currently on version 1.3. You can view the version history here. You may use Github's built in links to download and view the tests or simply clone the repo.

JZ Publish/Subscribe is dependent on only one thing, and that's jQuery itself. You must be using jQuery version 1.4.3 or higher, which really really shouldn't be a problem.

The subscribe method is quite simple. All you need to do is give the function a topic and a callback. If the topic that you specified gets published to, the callback will be executed (in the context of an empty object or the specified context, meaning this refers to {} or the specified context object). You may include more than one topic to subscribe the callback to just by adding a space and listing another topic. If there are multiple callbacks subscribed to one topic, they will be executed in the order that they were subscribed. See below for example usage of $.subscribe():

Our second option is to specify the topic(s), a reference to a callback that had been previously subscribed, and if a context was used in the subscription you need to specify that same context as well. If you used an anonymous function as the callback for the subscription, then you can retrieve a reference to the callback from the handle: handle.callback. The topics are listed in the exact same way they are listed when you subscribe. The space character is the separator between each topic.

The final option for unsubscribing is to just include the topic(s). This will remove every single subscription to those topics in one swoop.

As a final note: since $.unsubscribe returns the jQuery object, calls to unsubscribe can be chained together.

$.publish is the function that makes the ability to subscribe useful. Any and all callbacks subscribed to the topic(s) that you publish to will be executed in the order they were subscribed. Optionally you may include a data parameter, which is any variable or piece of data that you want your subscribers to have in order for them to do their job properly. This can be in any format - number, string, boolean, object, function, etc - you want it to be, as long as it all fits in one variable. See below for some example code.

Topics: Topics can use any name that can also be used as a property name. Since the topic is always retrieved using the bracket notation (e.g. object["prop"]), as opposed to the dot notation (e.g. object.prop), you are allowed to use a large numbers of characters that aren't legal for variable names, such as slashes ("/") or periods ("."). You cannot, however, use a space (" ") because this is the character that separates multiple topics.

All three functions (subscribe, unsubscribe, and publish) are able to take one or multiple topics (separated by a space).

Handle: The handle that is returned from the $.subscribe function is simply an object with three properties, named "topics", "callback", and "context" that correspond to the three parameters that you sent in (or context will be a blank object if no context was provided):

Callback Topic Argument: The first argument that the callback receives is the topic in which the function was subscribed and invoked from. This will always be a string containing only one topic, even if the $.publish function is called with multiple topics because the callback will be run once for each individual topic that is published.