Main location for this repo has been moved to https://github.com/chilipeppr/serial-port-json-server

A serial port JSON websocket & web server that runs from the command line on Windows, Mac, Linux, Raspberry Pi, or Beagle Bone that lets you communicate with your serial port from a web application. This enables web apps to be written that can communicate with your local serial device such as an Arduino, CNC controller, or any device that communicates over the serial port. Since version 1.82 you can now also program your Arduino by uploading a hex file.

The app is written in Go. It has an embedded web server and websocket server. The server runs on the standard port of localhost:8989. You can connect to it locally with your browser to interact by visiting http://localhost:8989. The websocket is technically running at ws://localhost/ws. You can of course connect to your websocket from any other computer to bind in remotely. For example, just connect to ws://192.168.1.10/ws if you are on a remote host where 192.168.1.10 is your devices actual IP address.

The app is one executable with everything you need and is available ready-to-go for every major platform. It is a multi-threaded app that uses all of the cool techniques available in Go including extensive use of channels (threads) to create a super-responsive app.

If you are a web developer and want to write a web application that connects to somebody's local or remote serial port server, then you simply need to create a websocket connection to the localhost or remote host and you will be directly interacting with that user's serial port.

For example, if you wanted to create a Gcode Sender web app to enable people to send 3D print or milling commands from your site, this would be a perfect use case. Or if you've created an oscilloscope web app that connects to an Arduino, it would be another great use case. Finally you can write web apps that interact with a user's local hardware.

Thanks go to gary.burd.info for the websocket example in Go. Thanks also go to tarm/goserial for the serial port base implementation. Thanks go to Jarret Luft at well for building the Grbl buffer and helping on global code changes to make everything better.

Here is a screenshot of the Serial Port JSON Server being used inside the ChiliPeppr Serial Port web console app. http://chilipeppr.com/serialport 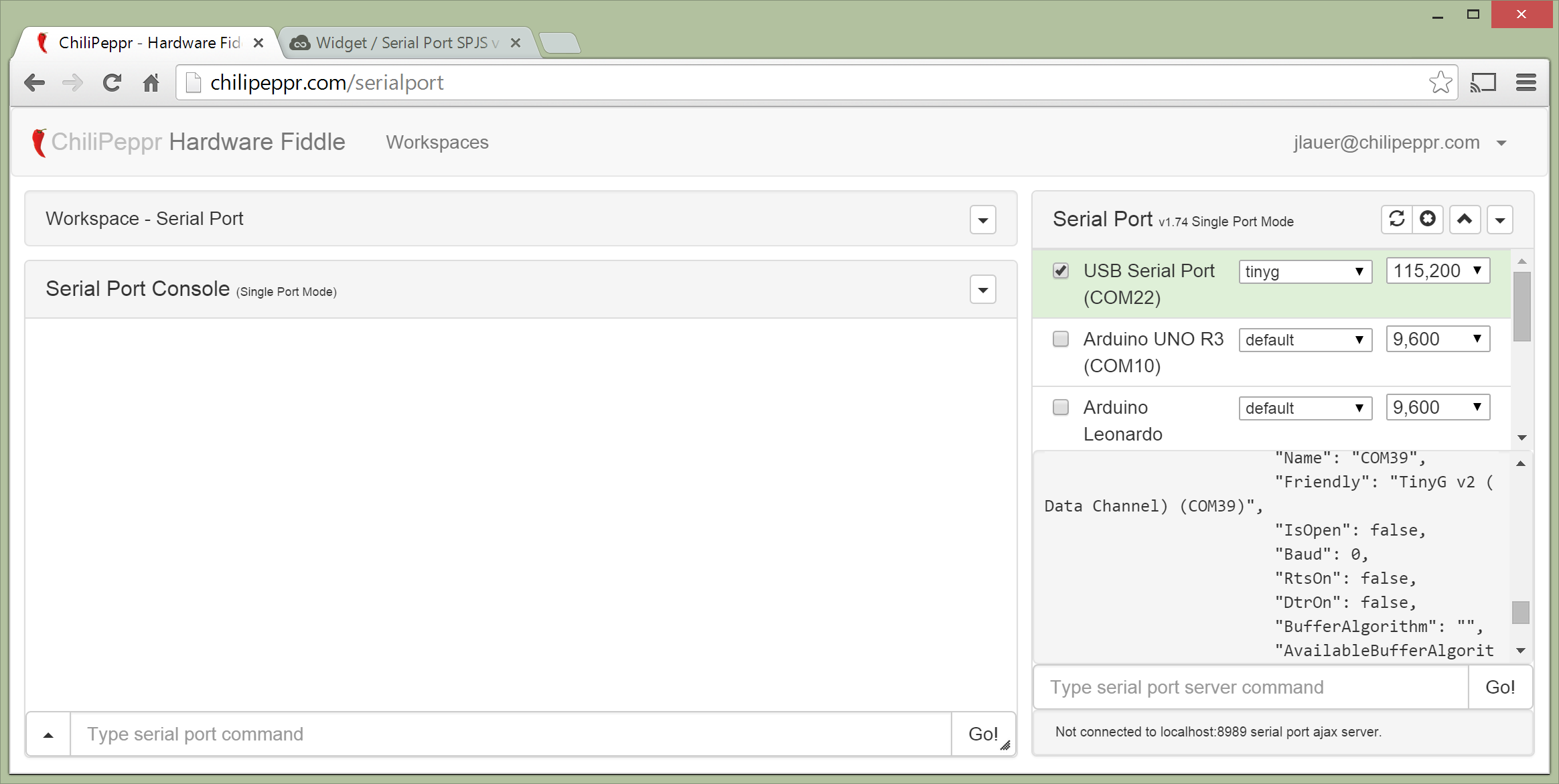 This is the Serial Port JSON Server being used inside the TinyG workspace in ChiliPeppr. http://chilipeppr.com/tinyg

There is also a JSFiddle you can fork to create your own interface to the Serial Port JSON Server for your own project. http://jsfiddle.net/chilipeppr/vetj5fvx/ 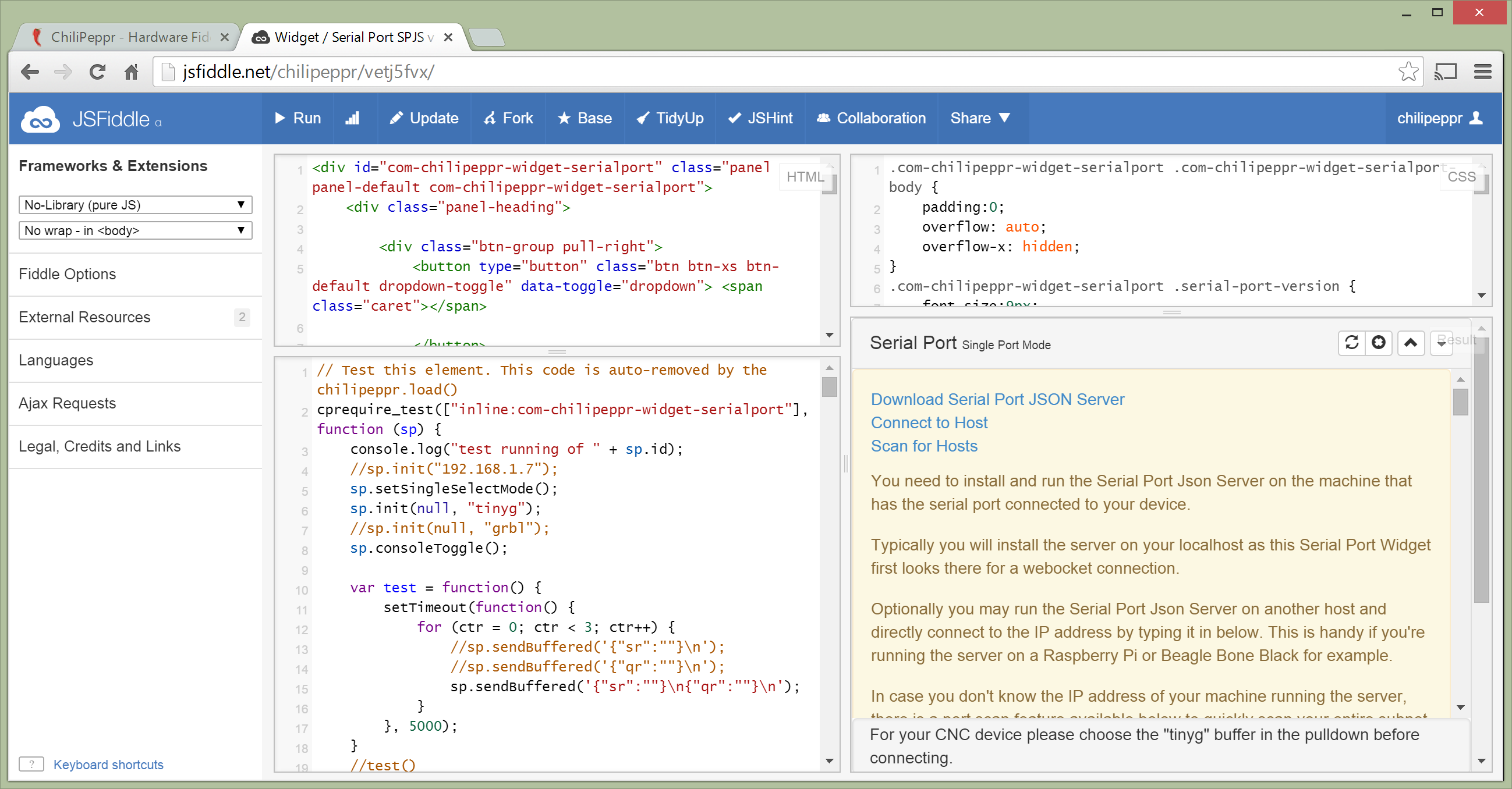 From the command line issue the following command:

Here's a screenshot of a successful run on Windows x64. Make sure you allow the firewall to give access to Serial Port JSON Server or you'll wonder why it's not working. 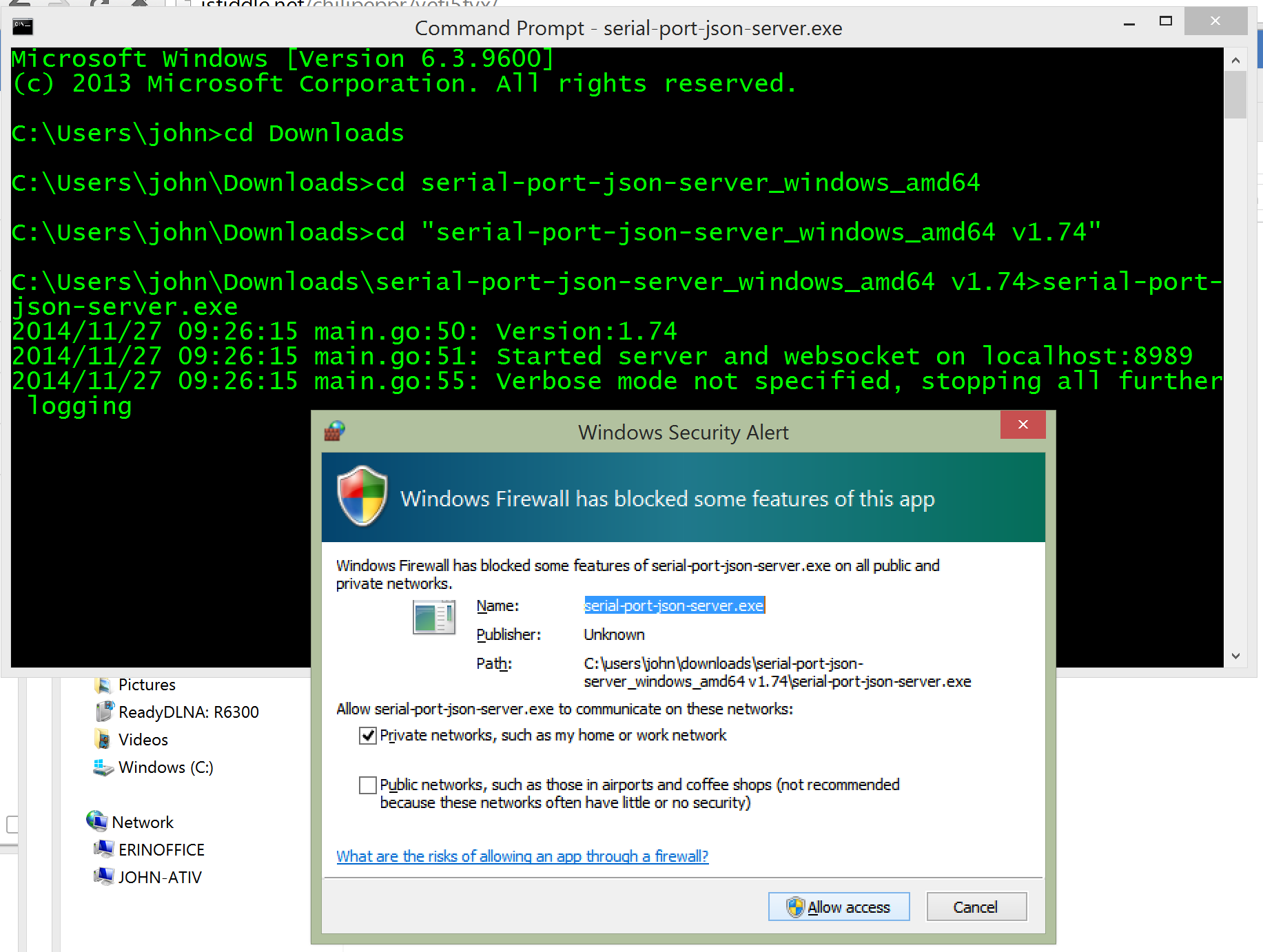 There is a new feature available as of version 1.83 which is Feed Rate Override. It can be triggered by sending in a command like the following:

This command asks SPJS to override the existing feed rate and reduce it by half. If you have a feedrate of 200 then the command above would bring it to 100 by multiplying 200 * 0.5 = 100. To turn off the feed rate override set it back to 0 with a command such as:

You do not need to build this. Binaries are available above. However, if you still want to build...

Programming Your Arduino from SPJS

The ability to program your board is now available within Serial Port JSON Server (SPJS). This feature was developed by the folks at Arduino because they are looking to use SPJS inside their upcoming Web IDE project. Therefore you can expect great support for this feature into the future as it will be the main way the IDE programs the boards. For folks using SPJS in other environments like ChiliPeppr, this means you'll be able to do firmware updates on your boards without much effort.

There are two new commands:

These commands are identical except for one parameter that specifies where the binary hex/bin file is. With the program command you specify a file path. With programfromurl you specify a public URL.

This example command will update your Arduino Due with the latest TinyG G2 firmware for your CNC machine. It will download the bin file from Github and flash it to an Arduino Due running on the ttyACM0 serial port on a Raspberry Pi 2.

This example will update your Arduino Uno running on a Windows computer with the latest version of Grbl from a public URL.

The 2nd parameter of core:architecture:name specifies which board you're trying to program so that SPJS can figure out what programmer and parameters should be used to send the hex/bin file up to your device. The choices can be seen in the boards.txt file in the distribution, but here is a partial list for quick reference:

There is a growing need for end-clients of SPJS to be able to chat with eachother. Therefore a new command has been added called "broadcast". It's not a very sophisticated feature because it simply regurgitates out whatever is after the broadcast command back to all connected clients. This simplistic approach means any user can implement any command they would like via the broadcast command and create unique solutions via SPJS.

For example, if a pendant controller for your CNC is connected to SPJS and trying to figure out if the ChiliPeppr main workspace has some stored settings for your pendant, it could send out a command like: broadcast get-settings

And SPJS would regurgitate the command to all connected sockets like: {"Cmd":"Broadcast","Msg":"get-settings\n"}

And if the ChiliPeppr workspace were listening for all incoming {"Cmd":"Broadcast","Msg":...} signals and specifically the "get-settings" command then it could respond with something like: broadcast settings x:1, y:10, z:4

This is a very interesting branch on this project where Ben took the basic code layout, websocket, and command structure and created a GPIO server version of this app. It's such an interesting and awesome project, it makes me want to combine his code into SPJS to make a full-blown version of serving up hardware ports via JSON and websockets--whether they're serial ports or GPIO ports. Something about that just feels right. The only downside is that no Windows or Mac machines have GPIO, so it would be a very Raspberry Pi specific feature.

Here's a really lightweight /etc/init.d startup script for use on Linux like with a Raspberry Pi, Beable Bone Black, Odroid, Intel Edison, etc.

Create a text file inside /etc/init.d called serial-port-json-server, for example:

Then make sure the file contents contain the following script, but make sure to update the path to your serial-port-json-server binary. This example has the binary in /home/pi but yours may differ.

Then you need to run the following command to setup your /etc/init.d script so it starts on boot up of your computer...

And of course to manually start/stop the service: