Status: Alpha (Don't use in production)

A gem that manages features switches in an application. Feature switches are dynamically configured. They can be turned on, on to a percentage of actors, on to a specific group of actors, or off without a code deploy. There are some excellent and mature projects that provide this functionality already: rollout and flipper. This project is an experiment aiming for a specific set of design goals:

Switches uses a backend for both storage of feature configuration data and for notifying sibling nodes that a change has been made. We'll look at how this works against the Redis backend. 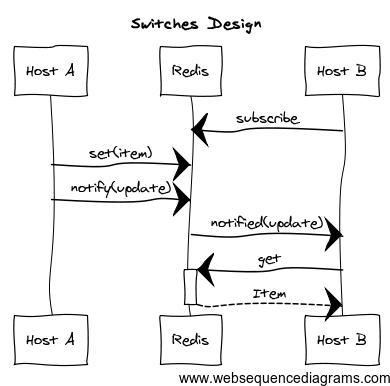 This allows a node to validate if a user can pass through a feature switch using in-memory data without a querying a backend but ensures that each node is using the same data to make the decision.

Note that switches will connect to Postgres twice for each node. This is important as Postgres will fork a new process for each connection so ensure you have the overhead before using this backend.

To use Postgres a table called switches must be created in your database. Two rake tasks have been included to create and drop this table: