The main goal of A2plus is to create a very simple, easy to use, and not over-featured workbench for FreeCAD assemblies. Using the KISS principle: KEEP IT SIMPLE, STUPID

A2plus workbench tries to implement a new constraint solving algorithm to avoid some problems that occurred with the original solver. It is still under development and experimental at this moment but is showing some potential.

This project started as a fork of Hamish's Assembly 2 workbench (development on A2 went dormant and was unmaintained for a long period). A2plus can be used with FreeCAD v0.16, v0.17 and v0.18 including support for importing parts from external files. 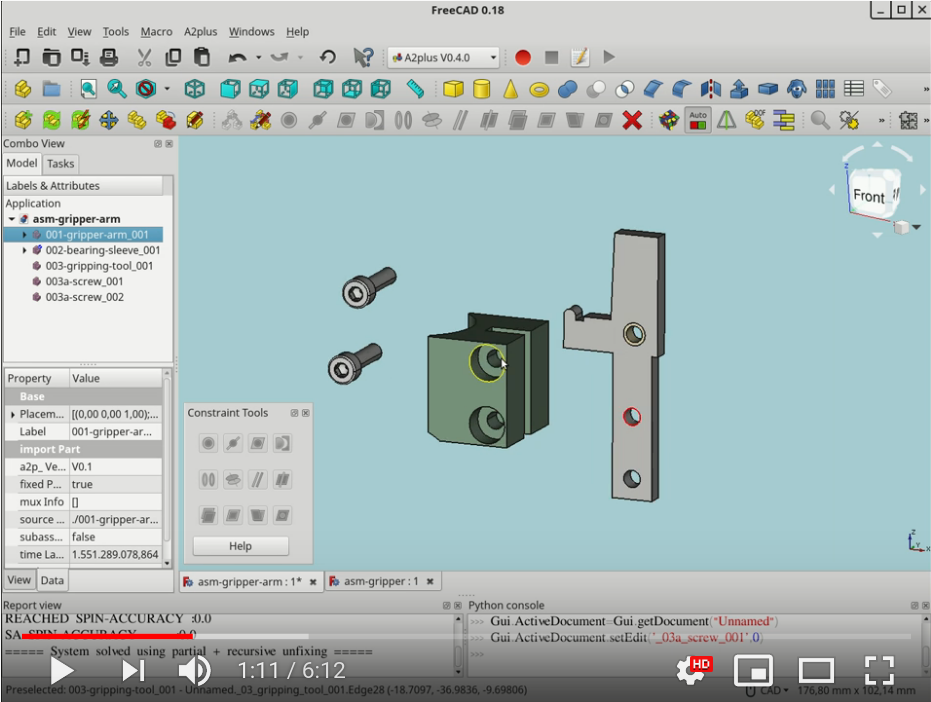 Is A2plus compatible with Assembly2 ?

No. A2plus would have to handle everything in same way as Assembly 2, including bugs, exact orientations, etc. You have to assemble existing projects again.

There are prereleases available, please browse the releases section of this repository.

A weak point is, and is similar to Assembly 2, updating / reimporting parts from external files. Constraints will break. You should delete constraints of parts before reimporting them. After that please constrain these parts again.

This behaviour is due to FreeCAD's lack of Topological Naming and is difficult to correct at the moment. This phenomena is seen in many proprietary CAD solutions. Some work is being done to address this in future releases of FreeCAD which will improve this behaviour.

The recommended way to install A2plus is via FreeCAD's Addon Manager under the Tools → 'Addon Manager' dropdown menu.

Features of the A2plus workbench

Usage hints for the A2plus workbench

Have a look on the Feature list above, and... Please, follow the Tooltips in the workbench's toolbar and in the "Constraint Tools" toolbox. They describe what to do in which order.