KickPunch is an old school Beat-'em-up game. Get your fighting skills tested by defeating all enemies in this three level action game.

It's a beautiful Sunday afternoon. Brian and Gloria Freezby are back in their home town for the weekend and are taking a stroll on Shaker St. together with their dog Dido. Suddenly, they are approached by a group of hooligans. One of them, visibly bigger than the others, steps out of the group. It's Brian’s old rival - Arkian Joel. Arkian does some smack talk and orders a bunch of his thugs to grab Gloria and Dido. He then leaves his gang to take care of the Brian problem.

Brian faces the bad guys in fight and after defeating them continues down on Shaker St. determined to find Arkian and save his wife and dog. 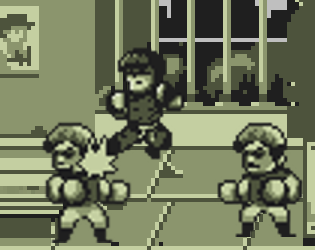 It's time to kick ass and chew bubble gum.

Here are some hints.

Get a production build

Third party code dependencies are under their respective licenses, see ./node_modules/%dependency-name%/LICENSE after their installation.

Assets are under CC BY 4.0 license, if no respective LICENSE file is present in ./src/assets subdirectories.

KickPunch is a GitHub Game Off 2017 entry.