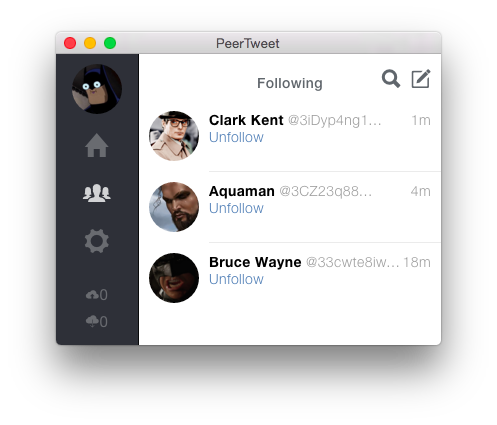 BitTorrent's DHT is probably one of the most resilient and censorship-resistant networks on the internet. PeerTweet uses this network to allow users to broadcast tweets to anyone who is listening. When you start PeerTweet, it generates a hash @33cwte8iwWn7uhtj9MKCs4q5Ax7B which is similar to your Twitter username (ex. @lmatteis). The difference is that you have entire control over what can be posted because only you own the private key associated with such address. Furthermore, thanks to the DHT, what you post cannot be stopped by any government or institution.

Once you find other PeerTweet addresses you trust (and are not spam), you can follow them. This configures your client to store this user's tweets and broadcasts them to the DHT every once in a while to keep their feed alive. This cooperation of following accounts, allows for feeds to stay alive in the DHT network. The PeerTweet protocol also publishes your actions such as I just followed @919c.. or I just liked @9139.. and I just retweeted @5789... This allows the possibility for new users to find other addresses they can trust; if I trust the user @6749.. and they're following @9801.., then perhaps I can mark @9801.. as not spam. This idea of publicly tweeting about your actions also allows for powerful future crawling analysis of this social graph.

PeerTweet follows most of the implementation guidelines provided by the DHT RSS feed proposal http://libtorrent.org/dht_rss.html. We implemented it on top of the current BEP44 proposal which provides get() and put() functionality over the DHT network. This means that, rather than only using the DHT to announce which torrents one is currently downloading, we can use it to also put and get small amounts of data (roughly 1000 bytes).

The reason items have multiple pointers to other items in the list is to allow for parallel lookups. Our skip list implementation differs from regular implementations and is targeted for network lookups, where each item contains 4 pointers so that when we receive an item, we can issue 4 get() requests in parallel to other items in the list. This is crucial for accessing user's feeds in a timely manner because DHT lookups have unpredictable response times.

When you follow someone, you're essentially informing your client to download their feed and republish it every so often. The DHT network is not a persistent one, and items quickly drop out of the network after roughly 30 minutes. In order to keep things alive, having many followers is crucial for the uptime of your feed. Otherwise you can still have a server somewhere running 24/7 which keeps your feed alive by republishing items every 30 minutes.

The app comes with some native bindings. I used this code to make it run on my computer:

To get ed25519-supercop to work on Windows I also had to install node-gyp and all the Python2.7 and Visual Studio stuff which node-gyp requires: https://github.com/nodejs/node-gyp

Then run these commands to build it on Windows:

If you use any 3rd party libraries which can't be built with webpack, you must list them in your webpack.config.base.js：

You can find those lines in the file.

To package apps for all platforms:

Use electron-packager to pack your app with --all options for darwin (osx), linux and win32 (windows) platform. After build, you will find them in release folder. Otherwise, you will only find one for your os.

test, tools, release folder and devDependencies in package.json will be ignored by default.

We add some module's peerDependencies to ignore option as default for application size reduction.

Note: If you want to use any above modules in runtime, for example: require('babel/register'), you should move them form devDependencies to dependencies.

If you want to have native-like User Interface (OS X El Capitan and Windows 10), react-desktop may perfect suit for you.

This is a fork of the https://github.com/chentsulin/electron-react-boilerplate project.