It's Magit! A Git porcelain inside Emacs. 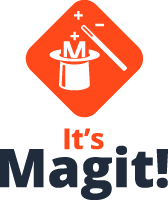 A Git Porcelain inside Emacs

Magit is an interface to the version control system Git, implemented as an Emacs package. Magit aspires to be a complete Git porcelain. While we cannot (yet) claim that Magit wraps and improves upon each and every Git command, it is complete enough to allow even experienced Git users to perform almost all of their daily version control tasks directly from within Emacs. While many fine Git clients exist, only Magit and Git itself deserve to be called porcelains.

Keeping its users this excited is a lot of work . If Magit makes you
more productive too, then please consider making a donation.
Thank you! — Jonas Bernoulli

Some alternative donation methods are available.

If you are new to Magit, then either one of the following two articles should help understanding how it differs from other Git clients.

When something doesn't work as expected then please first see the FAQ. Then also try the list of open issues and use the search box at the top of that page to find older related issues. You should also consult the manual and ask a general-purpose search engine.

If that doesn't answer your question, then ask for help on the Emacs Stackexchange site or the mailing list. We only use the GitHub issue tracker for feature requests and bug reports, so please don't ask for help there.

To report bugs and suggest new feature use the issue tracker. If you have some code which you would like to be merged, then open a pull request. Please also see CONTRIBUTING.md.

Over the years a lot of people supported development financially, including the 1987 backers of the 2017 crowdfunding campaign.

Thanks to all of you, may (the history of) the source be with you!

It's Magit! A Git porcelain inside Emacs.