Speed up your tests using MySQL server with tmpfs datadir

Speed up your tests using MySQL/MariaDB server with tmpfs datadir 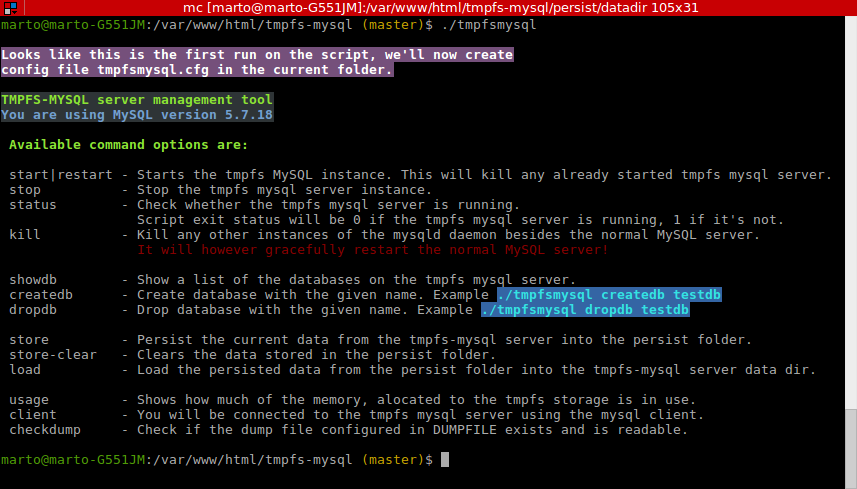 This repository has two key parts

The Bash script can be used to fire up a MySQL/MariaDB server instance whose datadir is located in a tmpfs(in memory/RAM) filesystem mounted in the /tmp/tmpfs-mysql/datadir folder.

If you don't like the idea of having secondary mysql server instance running on your machine, there is a Vagrantfile which could be used to fire up a vagrant Ubuntu server instance. The Vagrant file has provisioning script which installs the mysql-server and removes chef and puppet as we won't need them and they just use memory.

Why would i need this?

Having a mysql server instance with datadir in the memory, makes executing queries very... very fast.

This is usefull when running unit tests using PHPUnit, Codeception, etc. As the fixtures are being reloaded into the database on every test method, that unloading/loading of fixtures becomes slower and slower with the rising amount of fixtures.

With mysql server having its datadir in memory, the fixtures loading/unloading is no longer a time waster.

It is IMPORTANT to note that the tmpfs is NOT A PERMANENT storage, so don't use it for data which needs to persist. Test fixtures are disposable so we don't care about persistence.

This script currently works with Ubuntu based Linux distributions and Debian.

MariaDB is also supported. The code for MariaDB support was tested with version 10.0.27, but other versions should work as well.

Future versions will add support for other distributions.

The user for connecting to the tmpfs database is... wait for it... "tmpfs" :)

The port for the tmpfs mysql instance, set in the PORT variable is 3344.

In order to use the script, just follow these steps

The ifconfig command is just so you can see what network address has been given to the virtual machine.

The IP address 192.168.33.10 is the host-only address of the virtual machine, you can also use the bridged network address (the one you saw using ifconfig) to access the mysql server locally or from another machine in your network.

How to stop the tmpfs mysql server instance?

Speed up your tests using MySQL server with tmpfs datadir