Proofread will allow you to add a quick layer of tests for your web project without actually writing any tests.

Why do I need this?

A very common approach to testing is a layer of tests that just make sure your site is working by accessing the public urls. Proofread allows you to configure a list of urls that need to work and Proofread will do the rest.

Proofread is great and simple to get into your project without needing to fully understand how to write your own tests. It Just Works™.

This layer of testing yields a few immediate benefits:

Proofread pairs well as a pre-commit hook to try and prevent some obvious mistakes.

Then add to your INSTALLED_APPS:

The only configuration that needs to be done is telling Proofread which urls to test inside if your settings.py.

PROOFREAD_SUCCESS: List of paths that should return successfully. These should cover all of your public URLs

PROOFREAD_FAILURES: List of paths that should return 404 Not Found. Good for testing a 404 page or a page that was explicitly removed.

PROOFREAD_ENDPOINTS (advanced): A list of tuples that represent a raw request. All fields are optional except path: (path, status, method, post_data)

This configuration goes right inside your settings.py.

After configuring which urls Proofread needs to check, you're ready to run your tests. Proofread acts just like normal Django tests, so you can just run:

If you only want to run the tests that Proofread generates, you can run:

Proofread is designed to assist in preventing simple errors from getting caught before the code is even committed.

A git pre-commit hook is provided to try and help automate this process. A pre-commit hook is executed on your computer before the commit lands. If a test fails, git will reject your commit and you'll have to fix the broken code.

To install, run this snippet in the root of your git repository:

Note: This will overwrite any existing pre-commit hook, if one exists.

Proofread generates a dynamic test for each url. What that means, is that each url will product it's own success/failure separate from the rest with a name that indicates which endpoint was run and what the success code should have been. 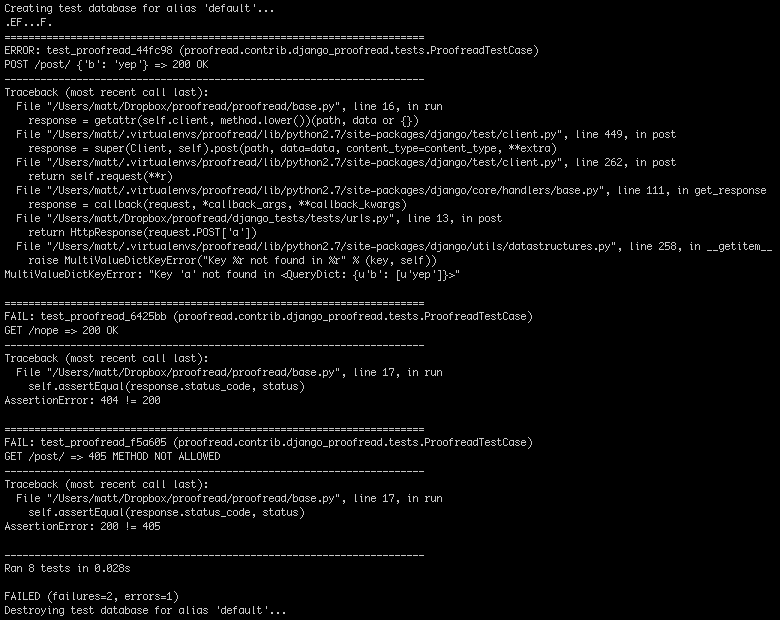