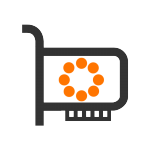 PF_RING™ is a Linux kernel module and user-space framework that allows you to process packets at high-rates while providing you a consistent API for packet processing applications.

Basically everyone who has to handle many packets per second. The term ‘many’ changes according to the hardware you use for traffic analysis. It can range from 80k pkt/sec on a 1,2GHz ARM to more than 20M pkt/sec per core on a low-end 2,5GHz Xeon. PF_RING™ not only enables you to capture packets faster, it also captures packets more efficiently preserving CPU cycles.

If you want to learn more about PF_RING™ please visit the User's Guide and the API Documentation.

For more information about PF_RING™ and other ntop technologies, please visit http://ntop.org

PF_RING™ kernel module and drivers are distributed under the GNU GPLv2 license, LGPLv2.1 for the user-space PF_RING library, and are available in source code format.