We want to implement counting the number of appearances of hashtags in tweets, grouped by date, and serve the data as a remote service, for example to be able to populate timelines in a website / mobile app (e.g. give me the evolution of mentions for hashtag "california" for the past 10 days).

The requirements for the solution are:

Using Hadoop to store the tweets and a simple Hive query for grouping by hashtag and date seems good enough for calculating the counts. However, we also want to add real-time to the system: we want to have the actual number of appearances for hashtags updated for today in seconds time. And we need to put the Hadoop counts in some really fast datastore for being able to query them.

The solution proposed is to use a "lambda architecture" and implement a real-time layer using Trident, which is an API on top of Storm that eases building real-time topologies and saving persistent state derived from them.

For serving the batch layer we will use Splout SQL which is a high-performant SQL read-only data store that can pull and serve datasets from Hadoop very efficiently. Splout is fast like ElephantDB but it also allows us to execute SQL queries. Using SQL for serving the batch layer is convenient as we might want to break-down the counts by hour, day, week, or any arbitrary date period.

We will also use Trident to implement the remote service using its DRPC capabilities. Trident iself will query both the batch layer and the real-time layer and merge the results.

This is how, conceptually, the overall architecture looks like: 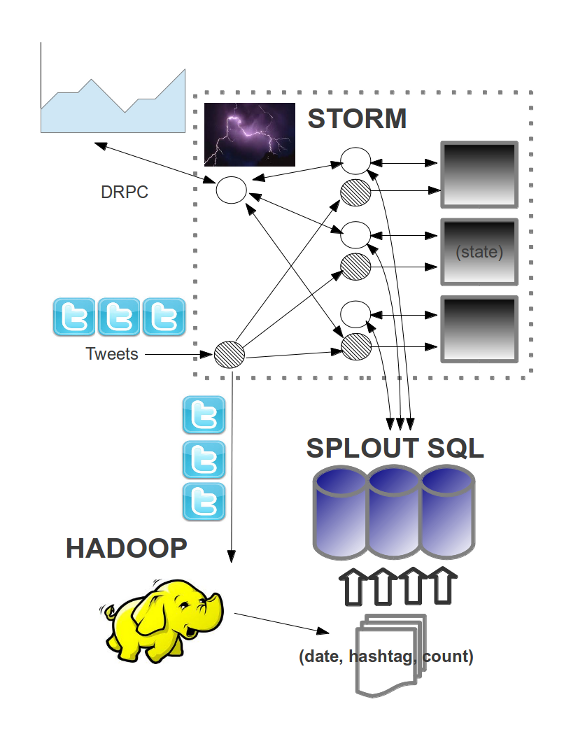 How to try it

Hadoop is a key component of this "lambda architecture" example so you must have it installed and its services must be running. $HADOOP_HOME needs to be defined for Splout SQL.

For trying out this example you must first download Splout SQL an execute a one-node cluster locally. You can download a distribution (.tar.gz file) from Maven Central: http://search.maven.org/#browse%7C-1223220252 After uncompressing it:

Should bring you a one-node local cluster up at: http://localhost:4412

When that is finished you can load a toy dataset of hourly hashtag counts. You can use the data in this "trident-lambda-splout" repo under "sample-hashtags" folder.

After these three statements you will have the data indexed, partitioned and loaded into Splout SQL. You can check it by looking for Tablespace "hashtags" at the management webapp: http://localhost:4412

Execute the class in this repo called "LambdaHashTagsTopology" from your favorite IDE. This class will:

If you want to execute it from command line you can use maven as follows:

The first four dates come from the batch layer Splout SQL whereas the last date (whose count is being incremented in real-time) comes from the real-time layer. The merging has been done with Trident at the DRPC service.

We have shown a simple toy example of a "lambda architecture" that provides timelines for mentions of hashtags in tweets. If you see the code, you will notice it is actually quite easy and straight-forward to implement the real-time part of this system using Trident, mainly because of its high-level constructs (a-la-Cascading, each(), groupBy(), etc) and its wrappers around memory state. There is quite an interesting amount of information on how to handle state properly with Trident here: https://github.com/nathanmarz/storm/wiki/Trident-state .

We have also seen Splout SQL, a database that integrates tightly with Hadoop and provides real low-latency lookups over its data, being the perfect solution for serving a batch layer in a highly concurrent website or mobile application.

For this example to be complete we have to clarify some things:

For another toy example on Storm (even though it is a bit old: http://www.datasalt.com/2012/01/real-time-feed-processing-with-storm/)