Node.js PaaS based on Haibu

ukraine glues haibu and node-http-proxy adding a little helper, chernobyl, that deploys into this cloud. It is probably as stable as you think it is. 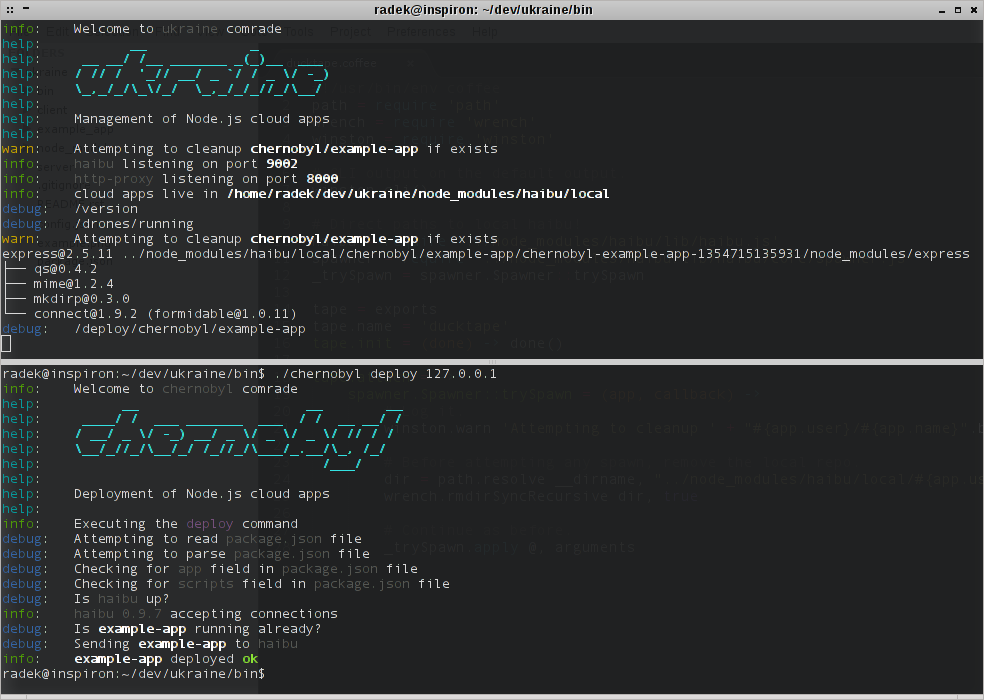 Create a config.json file if not present already in the lib's root:

haibu_port
On which port to start the Haibu service.
proxy_port
Where will all requests go? If set to 80, you will be able to access your apps without providing a port number.
proxy_host
What is the host used in the proxy routing table. This is the 'domain' you will be using to access the running apps.
auth_token
A token that a client will need to use to access the ukraine service. Leaving this property out will not require you to pass a token and is useful for debugging.
proxy_hostname_only
If set to true your apps will be routed from <app_name>.<proxy_host>:<proxy_port> instead of <proxy_host>:<proxy_port>/<app_name>/. Useful also in a case when you have links in your app that are root relative.

In order to run the server in the background, I recommend you install forever.js and start the service as follows:

Move to a directory with the app to deploy. Deploy pointing to cloud instance:

For setting environment variables exposed through process.env, set the key value pair env in your app's package.json file. You can also use the chernobyl app itself to pass them if you do not want to expose them in a public package.json file.

When the proxy_hostname_only is set to true, one can define custom domains that the app will respond to by editing the server/routes.json file adding a domains list under the app's entry. Example:

This means that if we do not match on an app's name domain which is /^example-app.newvegas/i, we will attempt to match on /^helios-one.newvegas/i.

Changes to this file do not require the restarting of the ukraine instance. The proxy will route on the first match and goes through the domains in a top to bottom fashion. The order of apps is determined by whatever for (key in obj) {} returns.

Spawns a node-http-proxy server that dynamically watches for changes in a routing table. All (useful) routes to haibu have been overwritten using promises.

New method for posting env vars has been added.

Token authentication per ukraine instance has been added too.

Be aware of these facts re ukraine/haibu:

Node.js PaaS based on Haibu