This repository contains the software toolchain and firmware for Sifteo's 2nd generation product, a tangible video game system based on a wireless network of STM32 and nRF24LE1 microcontrollers. 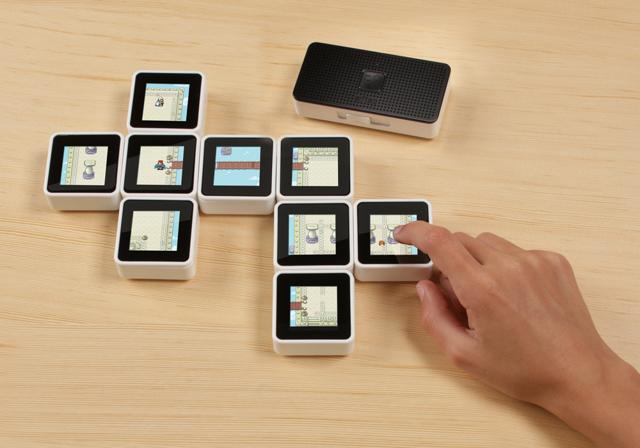 The code in this repository was our attempt to do something impossible. From late 2011 through early 2013, a very small team of engineers did their best to create a new kind of video game system. To keep costs down we needed to use the smallest and lowest-power chips we could. I took inspiration from the video game consoles and personal computers of the 1980s and 1990s, but we used modern compiler and compression technologies to get the most from our 8-bit CPUs and kilobytes of RAM.

The system's graphics and interaction come from a wireless network of "cubes" built using the same technologies that power other systems of wireless sensor nodes. Our cubes, however, needed to generate fluid real-time graphics with a minimum of CPU and battery power. As a result, the cube firmware became a highly optimized 2D graphics rendering machine. The simple hardware technique of sharing a single parallel bus between the CPU, LCD, and Flash memory enabled much faster graphics than a microcontroller could produce using a purely software approach.

These "cubes" act somewhat like a simple remote-controlled GPU. The game itself runs on a more powerful microcontroller, the "master" block. This is twice the size of a cube, with more battery power available. The master block runs games inside a new kind of virtual machine sandbox. Its simple operating system handles radio communications, storage, music, USB communications.

We wanted to create a robust "app" sandbox for running games, but we couldn't afford the price of hardware memory protection or the risk of allowing game code to have direct access to hardware that may be damaged by incorrect use. Our solution was strange and powerful. We called it "SVM". Most of a game's instructions ran natively at full speed, with some common operations implemented using privileged system calls. I wrote an LLVM backend to generate these specially formatted instructions and pack them into small blocks that could be cached and demand-paged in software from external serial flash memory.

Liam Staskawicz and I designed and built this monumental architecture. For better or worse, we were very careful about which other projects we depended on. Both of us come from an Open Source background and feel just a bit awful any time we have to use ambiguously-licensed code from some silicon vendor or another. So, when we built Thundercracker, we put in the extra time to build it all on a solid foundation. We created our own bootloader, our own platform support libraries, our own system simulator. We built on other open source tools, but in a way that we hoped could be eventually returned to the community.

That time has come. It saddens us that Sifteo Cubes were not the commercial success we hoped for, but at the same time I feel very grateful that we can share some of the amazing work we did to make the product real. I hope this code brings you some amusement at least, if not some utility.

Many of the components in this codebase are designed with reusability in mind. We've written a filesystem, operating system, several compression algorithms, graphics engine, simulator, linker, drivers for the nRF24L01 and nRF8001 radios, and so much more.

We can't provide any official support for this code, but I still care and I'll try to answer questions when I can. Who knows, perhaps Sifteo Cubes will live on as an Arduino shield or a swarm of remote control cars or maybe just a really esoteric easter egg.

If you aren't already familiar with the public documentation for the Sifteo SDK, best to check that out first. The Doxygen sources live in the docs directory, or you can view it online:

Most of the tools necessary to build the SDK are included in this repository, in the deps directory. There are some exceptions, like Doxygen. On Mac OS, you can install this with "brew install doxygen".

In the top-level Thundercracker directory, type make. This will build the firmware, compiler, asset preparation tools, documentation, and unit tests. Most of the results will be in the sdk directory.

The code here should all run on Windows, Mac OS X, or Linux. Right now the Linux port is infrequently maintained, but in theory it should still work. In all cases, the build is Makefile based, and we compile with some flavor of GCC.

Running "make" in this top-level directory will by default build all firmware as well as the SDK.

On most debian-like distros, you still need the arm toolchain (see below) but the following command should install all of the useful deps (if you already have one it will be skipped)::

On all platforms, the ARM GCC Embedded distribution is preferred. Binaries are available at:

BOOTLOADABLE Generate a binary compatible with the USB bootloader (Not JTAG)

BOARD Define the board to target. If unset, uses the default board in stm32/board.h

HAVE_NRF8001 If the current BOARD has an optional nRF8001 Bluetooth Low Energy controller, this enables support for it.