Roshi is a large-scale CRDT set implementation for timestamped events.

Roshi implements a time-series event storage via a LWW-element-set CRDT with limited inline garbage collection. Roshi is a stateless, distributed layer on top of Redis and is implemented in Go. It is partition tolerant, highly available and eventually consistent.

At a high level, Roshi maintains sets of values, with each set ordered according to (external) timestamp, newest-first. Roshi provides the following API:

Roshi is basically a high-performance index for timestamped data. It's designed to sit in the critical (request) path of your application or service. The originating use case is the SoundCloud stream; see this blog post for details.

Roshi is a distributed system, for two reasons: it's made for datasets that don't fit on one machine, and it's made to be tolerant against node failure.

Next, we will explain the system design.

CRDTs (conflict-free replicated data types) are data types on which the same set of operations yields the same outcome, regardless of order of execution and duplication of operations. This allows data convergence without the need for consensus between replicas. In turn, this allows for easier implementation (no consensus protocol implementation) as well as lower latency (no wait-time for consensus).

Operations on CRDTs need to adhere to the following rules:

Data types as well as operations have to be specifically crafted to meet these rules. CRDTs have known implementations for counters, registers, sets, graphs, and others. Roshi implements a set data type, specifically the Last Writer Wins element set (LWW-element-set).

This is an intuitive description of the LWW-element-set:

For a Roshi LWW-element-set, an element will always be in either the add or the remove set exclusively, but never in both and never more than once. This means that the logical set S is the same as the add set A.

Every key in Roshi represents a set. Each set is its own LWW-element-set.

For more information on CRDTs, the following resources might be helpful:

Roshi replicates data over several non-communicating clusters. A typical replication factor is 3. Roshi has two methods of replicating data: during write, and during read-repair.

A write (Insert or Delete) is sent to all clusters. The overall operation returns success the moment a user-defined number of clusters return success. Unsuccessful clusters might either have been too slow (but still accepted the write) or failed (due to a network partition or an instance crash). In case of failure, read-repair might be triggered on a later read.

A read (Select) is dependent on the read strategy employed. If the strategy queries several clusters, it might be able to spot disagreement in the returned sets. If so, the unioned set is returned to the client, and in the background, a read-repair is triggered, which lazily converges the sets across all replicas.

Roshi runs as a homogenous distributed system. Each Roshi instance can serve all requests (Insert, Delete, Select) for a client, and communicates with all Redis instances.

Since all operations are idempotent, both failure modes do not impede on convergence of the data.

Persistence is delegated to Redis. Data on a crashed-but-recovered Redis instance might be lost between the time it commited to disk, and the time it accepts connections again. The lost data gap might be repaired via read-repair.

If a Redis instance is permanently lost and has to be replaced with a fresh instance, there are two options:

Both processes can be expedited via a keyspace walker process. Nevertheless, these properties and procedures warrant careful consideration.

Write operations (insert or delete) return boolean to indicate whether the operation was successfully applied to the data layer, respecting the configured write quorum. Clients should interpret a write response of false to mean they should re-submit their operation. A write response of true does not imply the operation mutated the state in a way that will be visible to readers, merely that it was accepted and processed according to CRDT semantics.

As an example, all of these write operations would return true.

Roshi does not support elasticity. It is not possible to change the sharding configuration during operations. Roshi has static service discovery, configured during startup.

Client timestamps are assumed to correctly represent the physical order of events coming into the system. Incorrect client timestamps might lead to values of a client either never appearing or always overriding other values in a set.

Assuming a replication factor of 3, and a write quorum of 2 nodes, Roshi makes the following guarantees in the presence of failures of Redis instances that represent the same data shard:

Failures of Redis instances over independent data shards don't affect instantaneous data durability. However, over time, independent Redis instance failures can lead to data loss, especially on keys which are not regularly read-repaired. In practice, a number of strategies may be used to probabilisticly mitigate this concern. For example, walking modified keys after known outages, or the whole keyspace at regular intervals, which will trigger read-repairs for inconsistent sets. However, Roshi fundamentally does not guarantee perfect data durability. Therefore, Roshi should not be used as a source of truth, but only as an intermediate store for performance critical data.

In case it's not obvious, Roshi performs no authentication, authorization, or any validation of input data. Clients must implement those things themselves.

Roshi has a layered architecture, with each layer performing a specific job with a relatively small surface area. From the bottom up... 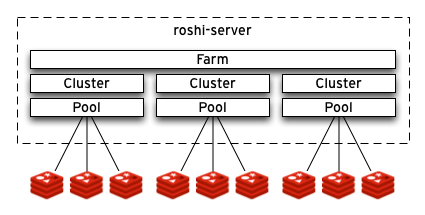 (Clusters need not have the same number of Redis instances.)

Roshi is written in Go. You'll need a recent version of Go installed on your computer to build Roshi. If you're on a Mac and use homebrew, brew install go should work fine.

See roshi-server and roshi-walker for information about owning and operating your own Roshi.

Roshi is a large-scale CRDT set implementation for timestamped events.