This project was developed as part of a TU Vienna Bachelor thesis on the use of L-systems inside of the open source 3D computer graphics software Blender. The thesis describes applications of the code prodived in this project for specific use cases of L-system modeling in Blender and specifically to environmental interaction of a growing structure with a Blender scene.

The full thesis is available as PDF: https://www.cg.tuwien.ac.at/research/publications/2017/LEOPOLD-2017-ALG 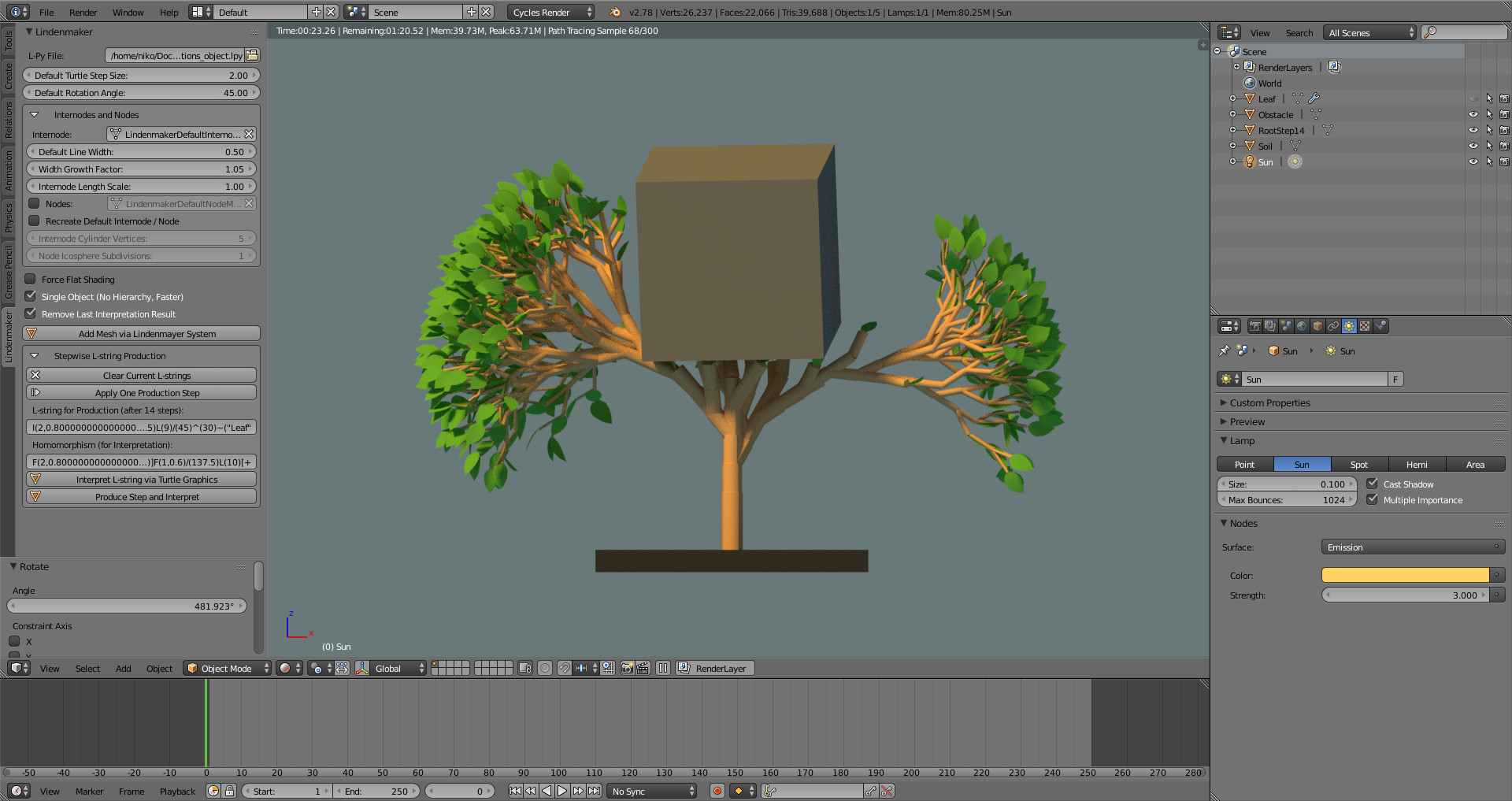 The add-on is based upon a custom version of the open source L-Py (Lindenmayer Python) framework by Boudon et al. The original implementation [4] is written in C++ and exposed to Python via Boost::Python, however only supporting Python 2, which is not compatible with the Blender Python API which is based on Python 3.5.

L-Py is used for the derivation of L-strings via application of production rules defined in an .lpy file. Lindenmaker is responsible for the graphical interpretation (turtle interpretation) and visualisation of the resulting L-string. It reads in an .lpy file, passes it to L-Py to derive the L-string and then produces a hierarchy of objects corresponding to the structure described by the L-string via turtle interpretation, according to parameters specified in the add-on UI within Blender. Thus the custom version of L-Py has been freed from dependencies to PlantGL which is orginally used for the graphical interpretation of L-strings. 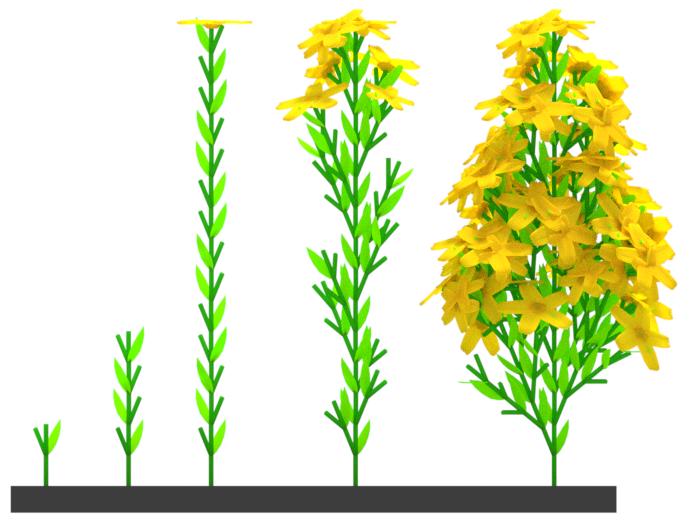 Note: To determine the path of <blender scripts dir> on your system, refer to the blender docs [5].

The Lindenmaker panel can be found in the 3D View Tool Shelf (open via <T> key).

Before using the add-on, a valid L-Py L-system definition file (.lpy) has to be provided. For information and examples on how to write these, refer to the official L-Py documentation [6].

NOTE: The Lindenmaker add-on does not support all turtle interpretation commands allowed by the original L-Py framework. The .lpy file used for L-string production can contain any of the elements related to L-Py, as long as the resulting L-string used for turtle interpretation contains no other than the commands listed in the following. Other commands than those listed below will typically yield no error but are ignored and have no effect. Importantly, only single character module names are supported.

The turtle state consists of a 4x4 matrix storing its position and three perpendicular vectors (heading, left and up) defining its orientation (local coordinate system), as well as some attributes related to drawing. Note that drawing attributes can be adjusted via the UI. Turtle state is altered via commands corresponding to letters in the L-string, as it is read from left to right during turtle interpretation. Some of these commands take arguments, most of them optional, which if used should be enclosed in parentheses and separated by commas, e.g. F(2,0.5). If no arguments are given, default values are assumed. Details are noted in the following.

[ Push current turtle state to the stack (and if enabled from ui draw node object).

] Pop last turtle state from stack and use as current.

+ Turn left around the up vector. Parameters: angle (float, optional)

- Turn right around the up vector. Parameters: angle (float, optional)

^ Pitch up around the left vector. Parameters: angle (float, optional)

& Pitch down around the left vector. Parameters: angle (float, optional)

| Turn halfway around the up vector.

_ Increase internode and node object draw radius by fixed amount. Parameters: radius (float, optional, if given by convention set to this value instead of increment).

! Decrease internode and node object draw radius by fixed amount. Parameters: radius (float, optional, if given by convention set to this value instead of decrement).

; Increment material index for internode and node objects. Parameters: materialindex (integer, optional, if given by convention set to this value instead of increment).

, Decrement material index for internode and node objects. Parameters: materialindex (integer, optional, if given by convention set to this value instead of decrement).

% Remove remainder of current branch (until next unmatched closing bracket or end of string).

Default Rotation Angle: Default angle in degrees for turtle rotation commands if no argument given.

Internode: Name of mesh to be used for drawing internodes via the F command. Default is "LindenmakerDefaultInternodeMesh", a cylinder mesh generated at first use.

CHECKBOX Nodes: If enabled, the selected node mesh is drawn at branching points. If not enabled uses Empty objects if hierarchy is used. Default is "LindenmakerDefaultNodeMesh", an icosphere mesh generated at first use.

CHECKBOX Remove Last Interpretation Result: If enabled, the result from the previous interpretation is removed. Useful for stepwise production and interpretation, to avoid cluttering the scene.

The following elements can be found in the "Stepwise L-string Production" section.

BUTTON Clear Current L-strings: Clear the currently stored L-strings. Note that while the L-system yields just one L-string, two copies of the L-string are stored: One used for production and one used for graphical turtle interpretation. See below for details.

BUTTON Apply One Production Step: Apply a single production step to current L-string, or to axiom in first production step. No graphical turtle interpretation is done.

Lindenmaker adds material slots to the default internode object (or for corresponding mesh polygons if a single object is produced) and alphabetically assigns existing materials to them from the material list of the Blender scene depending on the currently set turtle material index. Thus basically, random materials will be applied initially. The idea is that these generated material slots can then be edited after interpretation, when the result is inspected. To avoid unintentional modifications of global materials that are already used in other objects (shared materials might be intended but not always), a "single user" copy of the material can be made from the materials panel.