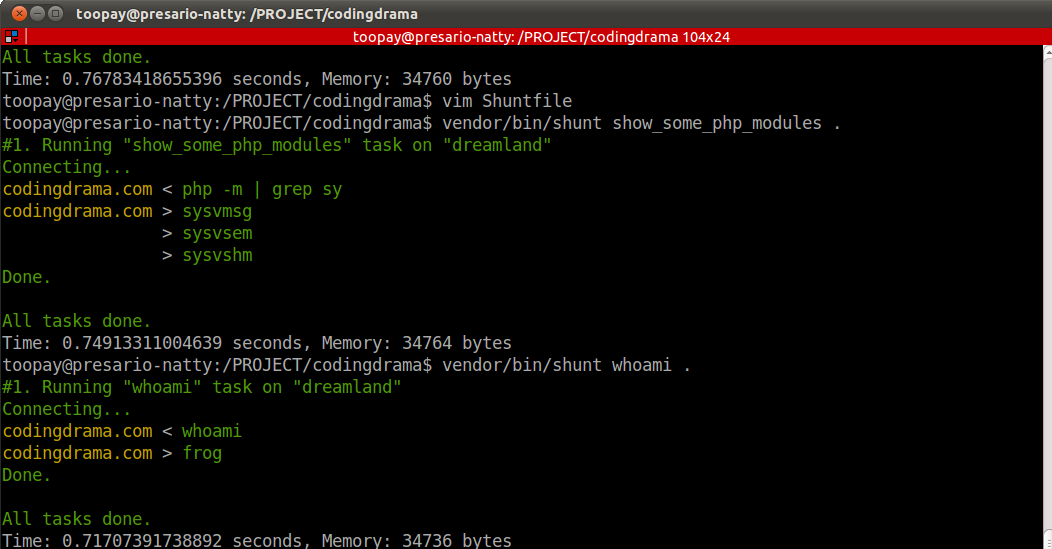 Inspired by Ruby's Capistrano, Shunt is PHP library for executing commands on multiple remote machines, via SSH. Specifically, this library was written to simplify and automate deployment of PHP applications to distributed environments.

Shunt has very firm ideas about how things ought to be done, and tries to force those ideas on you. Some of the assumptions behind these opinions are:

Do not expect these assumptions to change.

In general, you'll use Shunt as follows:

From the root folder of your composer-based project, use the Shunt script as follows:

By default, the script will look for a file called Shuntfile, which contain hosts information, credential and your tasks. Here the structure of Shuntfile :

The tasks collection indicates which tasks that available to execute. You can execute list command to see all the available tasks and available hosts. Based by above recipes, you could run :

Above command will execute ls on all remote machines defined in hosts parameter. You could tell Shunt to run the task on specific host(s) by appending the host nickname right after the task :

Bugs and feature request are tracked on GitHub

Shunt is released under the MIT License. See the bundled LICENSE file for details.