pathpy is an OpenSource python package for the analysis of time series data on networks using higher- and multi-order network models.

Unifying the modelling and analysis of path statistics and temporal networks, pathpy provides efficient methods to extract causal or time-respecting paths from time-stamped network data. The current package distributed via the PyPI name pathpy2 supersedes the packages pyTempnets as well as version 1.0 of pathpy.

pathpy facilitates the analysis of temporal correlations in time series data on networks. It uses a principled model selection technique to infer higher-order graphical representations that capture both topological and temporal characteristics. It specifically allows to answer the question when a network abstraction of time series data is justified and when higher-order network representations are needed.

pathpy facilitates the analysis of temporal correlations in time series data on networks. It uses model selection and statistical learning to generate optimal higher- and multi-order models that capture both topological and temporal characteristics. It can help to answer the important question when a network abstraction of complex systems is justified and when higher-order representations are needed instead.

The theoretical foundation of this package, higher- and multi-order network models, was developed in the following published works:

pathpy extends higher-order modelling approaches towards multi-order models for paths that capture temporal correlations at multiple length scales simultaneously. All mathematical details of the framework can be found in this openly available preprint. A broader view on optimal higher-order models in the analyis of complex systems can be found here.

pathpy is fully integrated with jupyter, providing rich and interactive in-line visualisations of networks, temporal networks, higher-, and multi-order models. Visualisations can be exported to HTML5 files that can be shared and published onthe Web.

pathpy is pure python code. It has no platform-specific dependencies and should thus work on all platforms. pathpy requires python 3.x. It builds on numpy and scipy. The latest release version 2.0 of pathpy can be installed by typing:

Please make sure that you use the pyPI name pathpy2 as the package name pathpy is currently blocked.

If you want to install the latest development version, you can install it directly from the gitHub repository by typing:

A comprehensive 3 hour hands-on tutorial that shows how you can use pathpy to analyse data on pathways and temporal networks is available online.

An explanatory video that introduces the science behind pathpy is available here: 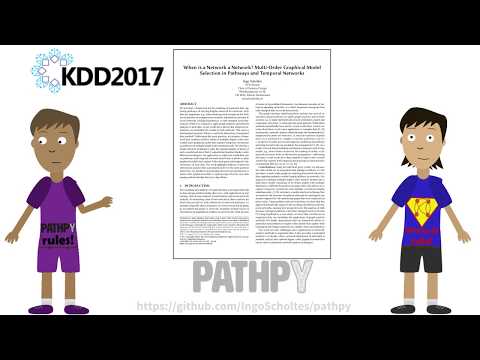 A promotional video showcasing some of pathpy's features is available here: 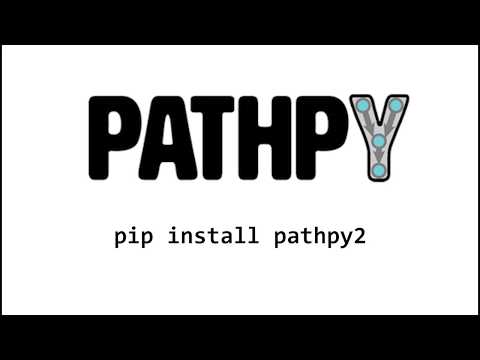 The code is fully documented via docstrings which are accessible through python's built-in help system. Just type help(SYMBOL_NAME) to see the documentation of a class or method. A reference manual is available here https://uzhdag.github.io/pathpy/hierarchy.html

The first public beta release of pathpy (released February 17 2017) is v1.0-beta. Following versions are named MAJOR.MINOR.PATCH according to semantic versioning. The latest release version is 2.0.0.

The research and development behind pathpy is generously funded by the Swiss National Science Foundation via grant 176938.

The research behind this data analytics package was previously funded by the Swiss State Secretariate for Education, Research and Innovation via grant C14.0036. The development of the predecessor package pyTempNets was supported by the MTEC Foundation in the context of the project "The Influence of Interaction Patterns on Success in Socio-Technical Systems: From Theory to Practice".

pathpy is licensed under the GNU Affero General Public License.