QWERTY keyboard layout to write French as well as code

QWaccent is a QWERTY keyboard layout with additional shortcuts to easily write in French.

It is derived from the UK Extended layout. The only modifications affect the input of diacritics.
So any UK keyboard can be used as-is, without stickers or specifically printed keys.

QWaccent is currently available for Windows only.
Contributions to provide MacOS and Linux versions are welcome ! 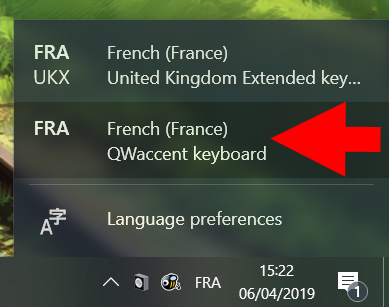 QWaccent layout has been designed for developers (or more generally people who favor QWERTY keyboards) who also need to write in French.

Developers often prefer QWERTY layouts because they are:

QWaccent layout aims to minimize the use of dead keys when writing French diacritics (é,à,û,ï...).
It also tries to be as easy to use as possible, by sometimes choosing efficiency over consistency: the most often used diacritics are placed on their corresponding letter key.

For instance (note the different accents):

Other diacritics are placed on adjacent letters.

Consistency is preserved for dead keys though. If you forget a shortcut, you can still write your diacritic using them, as there are easy to remember (they are the same as the default UK Extended layout).

Layout picture designed with keyboard-layout-editor.
Layout generated using Microsoft Keyboard Layout Creator 1.4 .
Thanks to the qwerty-fr layout for the inspiration.
Logo from freepik.com.

QWERTY keyboard layout to write French as well as code