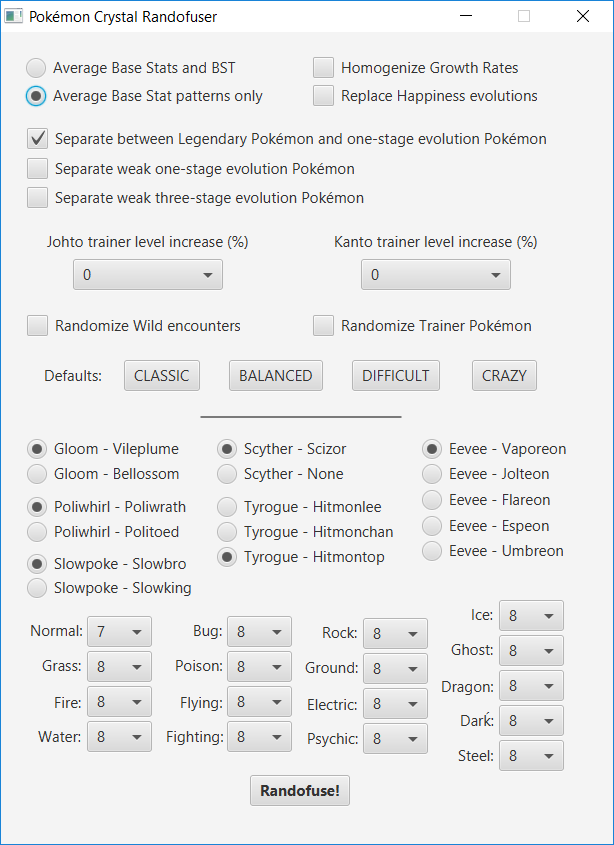 This is a special randomizer tool compatible with Pokemon Crystal. It fuses each Pokemon with another existing one at random with matching evolution stage. All the data and characteristics of the Pokemon such as moves and base stats are combined in different ways, as described below.

How Pokemon data gets fused

Pokemon will only be merged with another Pokemon of the same evolution category. For example, Charmander might be fused with Mareep, but not with Ekans. The combinations will be consistent across an evolutionary line; say Venonat is merged with Slugma, then Venomoth will be merged with Magcargo. Evolution categories can be further filtered before the randomization, for example to make Legendary Pokemon independent from other 1/1 evolution Pokemon.

Branched evolutions have been removed. Which Pokemon retains its evolutionary line is selectable. For example, if the user chooses Politoed to be the evolution of Poliwhirl, Poliwrath will be independent and will be merged with another independent Pokemon like Heracross or Mr. Mime. Note that the independent Pokemon will most likely be unobtainable due to not appearing as a wild Pokemon.

If two Pokemon with level-based evolutions are fused, the resulting Pokemon will evolve at the average of the two. If the "Average Base Stat patterns only" setting is selected, however, the base Pokemon's evolution level will weigh 80% of the total. Refer to the Settings section for more information. If either Pokemon evolves through other method (happiness, stone), the evolution type of the base Pokemon will be tranferred to the resulting Pokemon unchanged.

The resulting Pokemon will have a type taken from the base Pokemon and a type taken from the secondary Pokemon whenever possible. If either Pokemon is dual-type, the type chosen from it will be scored according to the custom type priorities (the type with the higher priority of the two will be chosen). If both types have the same priority, the primary type will be chosen. If both Pokemon are of the same single type, the resulting Pokemon will also be of only that type.

Learnsets are combined, including level-up, egg, and TM/HM moves. For example, if Cyndaquil gets fused with Gastly, it will learn Ember at level 12 and Mean Look at level 13, and will be able to learn both Fire Blast and Shadow Ball via TM. Moreover, level-up moves are arranged by level. When the moveset of a wild or trainer Pokemon is filled, it will end up with the last four moves that the two original Pokemon could learn by that level. For example, a level 30 "Gyarasect", will show up with Bite, Dragon Rage, Spore and Leer. Trainers no longer may have custom movesets.

Pokemon such as Raichu, Arcanine or Starmie that could only learn a subset of moves compared to their pre-evolutions have had their movesets updated to match the moves learnable by their pre-evolutions, although with a small level delay similar to the patterns found in other evolved Pokemon.

The user can choose whether each Base Stat is averaged or whether only the base stat patterns are averaged, keeping the BST (base stat total) of the base Pokemon unchanged. The second option differs from the first in that the resulting values of the base stats are then multiplied by a "BST factor", which is the quotient of the BST of the base Pokemon and the BST of the secondary Pokemon. This way, trainer and wild Pokemon can keep their original strength.

Additionally, there is a selectable option to homogenize Growth Rates, ignoring all the other rules. This option will make all Pokemon use a custom Growth Rate with characteristics from the parabolic and fast growth rates. It makes all Pokemon grow relatively fast at all level ranges, which is ideal to soften any necessity of grinding.

As described above, choose this option if you want all Pokemon to grow at the same speed and also relatively fast. A good idea if you are planning to bump the trainer Pokemon levels and/or looking for a nuzlocke run.

If this option is selected, Pokemon that evolve via happiness will be replaced with level-based evolutions, evolving at a reasonable level based on their overall strength. It's especially useful for balancing baby Pokemon like Togepi and Pichu.

Choose whether you'd like to increase the level of all trainer Pokemon by a custom percentage. Kanto trainers include all post-League content except the battle against Red. This part is known for being considerably easier than the Johto part, so increasing the levels in Kanto can be a good idea to maintain a decent challenge.

Choose whether you'd like to further filter which Pokemon can be fused with which Pokemon. The legendary filter is good for purity while the other two are intended to provide stability if averaging BST is selected. A total of 16 Pokemon are included in the 1-stage filter (BST-based, up to Tangela) and a total of just 5 in the 3-stage evolution filter (Pichu, Cleffa, Igglybuff, Caterpie, and Weedle lines). Keep in mind that these filters cut versatility in the randomization, especially the 3-stage one.

Select these options if you want to completely randomize the species of wild and trainer Pokemon, respectively. Before being fused, Pokemon will be arranged in groups based on overall strength and other factors such as rarity and evolution stage. 6 groups are used for trainer parties and only 4 groups are used for wild encounters (less exclusiveness of strong Pokemon to ensure variety). Each wild Pokemon slot and/or trainer Pokemon will be replaced with another that belongs to the same group. This arrangement has nothing to do with how Pokemon get fused with each other. Note that this strength classification may lose accuracy once the Pokemon are fused if "Average Base Stat patterns only" was not selected, although the evolution stage was also factored in for this reason. Logic and consistency are not preserved; for example, you will be able to find Fire-type Pokemon in the sea and Grass-type Pokemon in caves, and as for trainers, leaders and other trainer classes will no longer be type themed and your rival will not retain his party across battles. The randomization of wild Pokemon includes fishing, Headbutt, Rock Smash and Bug Catching Contest encounters, but does not include static encounters and roaming legendaries. Unown is not randomized in either mode.

There are some suggested defaults available to be chosen.

These settings are independent from the other ones and let the user choose which Pokemon follow its original evolutionary line. It also includes an option to separate Scyther and Scizor, as they have the same BST. Keep in mind that the Pokemon that you leave unselected will most likely become unobtainable, unless you play Catch 'Em All mode (see below).

Assign a different priority to each type to determine how the types should be fused, as detailed in the Types subsection above. You can use this to favor the appearance of rare types like Dark, Ice, Steel or Dragon, or just your favorites. You could lower the priority of generic types with lots of monotype Pokemon like Water or Normal so that they become a little less common. Be careful with type priorities though, as decreasing the priority of certain types could make them extinct. For example, if the Flying type is tied for the lowest priority, it will never show up given that there's no Pokemon with Flying as its primary type. This is the reason why the Normal type priority defaults to one point below all the other types; this way Normal/Flying Pokemon will pass their Flying type, while Pokemon like Xatu, Butterfree or Dragonite pass their other type.

Two Pokemon Crystal ROMs are provided in the download. crystal-notcea.gbc is the regular one, while crystal-cea.gbc incorporates additional changes to make all 251 Pokemon obtainable, including those that may become unattainable as a result of the Evolutionary Line settings. Even if you're not interested in completing the Pokédex, the Catch 'Em All option provides more variety to the Pokemon you can capture and therefore build your team with. In the Catch 'Em All mode you will also be able to purchase the evolutionary stones, except Moon and Sun, in the Ecruteak Mart. For information on where the new Pokemon can be found in the Catch 'Em All mode, refer to the catchemall.txt file provided in the download.

About combining this mode with the Randomize Wild encounters option: The Catch 'Em All mode was not made with the possibility of randomizing wild encounters in mind. At first glance, both modes seem contradictory, and in a way, they are. Randomizing wild encounters will override most of the changes provided by the Catch 'Em All mode. In practice, the only differences between both ROMs would be that with Catch 'Em All, evolutionary stones will be available in the Ecruteak Mart and that the Celebi event in the Ilex Forest will be active. If you're planning to turn on wild encounter randomization, choose one ROM or the other depending on if you wish to activate any of these two changes. Ironically, the Catch 'Em All mode won't ensure that the Pokedex can be completed if you randomize wild encounters, but due to all the wild Pokemon slots (up to 21 per area/map), it would be rare that a Pokemon (or a pre-evolution) doesn't appear anywhere.

If you think you've found a bug, feel free to let me know about it by opening an issue in this repository. Likewise, if you have a suggestion about what you'd like to see implemented in this tool, you can do the same. I'm probably not going to work on this project short term though, but depending on how popular it becomes, I may add new features in the future.