Your own Go Playground (for demos and workshops)
Find file

Your Own Go Playground

The official Go Playground runs on a sandbox, which is the recommended way of doing things like executing code from untrusted sources, since it minimizes security risks.

However, if you ever want to showcase features that require network access, a real filesystem, CGO or any kind of thing that is not supported or actively restricted by NaCL you're out of luck.

This unrestricted and insecure playground offers you more flexibility on that front, you can choose when to use the sandboxed environment and when not to.

You can run playground and connect it to a local sandbox like this:

This is similar to the play.golang.org web app, except that it:

You can build and run a Go Playground like this:

This will create a local server that uses the official Go Playground service to build and run Go code. See the main page at http://127.0.0.1:3000. 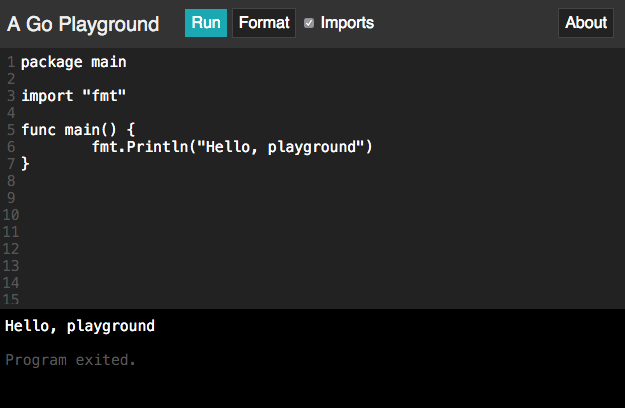 Love those nice live examples on the golang.org site? You can also embed them in your website using a few lines of code:

I basically took out all the security measures of the original sandbox and generated a dumbed down version of it which actually does not sandbox anything and will put your life at risk.

This is a unrestricted linux/amd64 installation, you should not really use this box unless you're absolutely sure you know what you're doing and you're aware that no matter what you do, people will try to abuse the system and they will probably succeed.

Ok, now that you're warned, you can (but shouldn't) build and run this dangerous box like this:

You can point the Go Playground web app to this service using the -c parameter:

Remember that this machine is completely open to the world, if you plan to upload it to a public place you should take some other containment measures, such as not using root to run the sandbox, using chroot jails and iptables rules, etc. this really depends on your specific needs.

Users of your playground won't be able to install or use packages that are not part of the Go standard library, in case you want to showcase a special package you'll have to create a slightly different docker image on top of the sandbox or the unsafebox, see this Dockerfile: 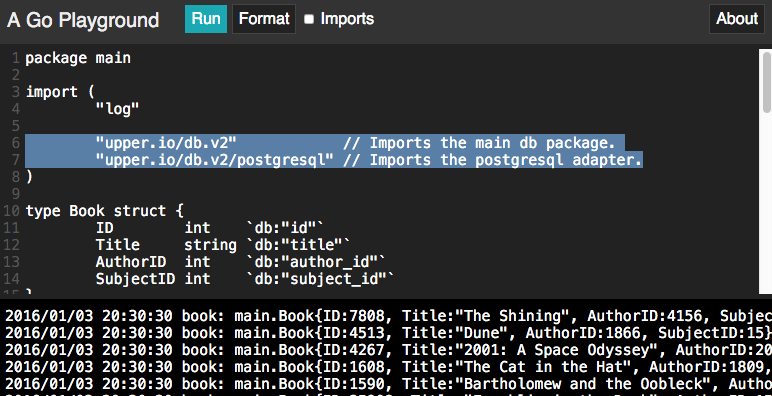 Feel free to use this playground on your next workshop to demonstrate your Go projects to others.