QDYN is a boundary element software to simulate earthquake cycles (seismic and aseismic slip on tectonic faults) under the quasi-dynamic approximation (quasi-static elasticity combined with radiation damping) on faults governed by rate-and-state friction and embedded in elastic media.

QDYN includes various forms of rate-and-state friction and state evolution laws, and handles non-planar fault geometry in 3D and 2D media, as well as spring-block simulations. Loading is controlled by remote displacement, steady creep or oscillatory load. In 3D it handles free surface effects in a half-space, including normal stress coupling. The medium surrounding the fault is linear, isotropic and elastic, and may be uniform or (in 2D) contain a damaged layer.

QDYN implements adaptive time stepping, shared-memory parallelization, and can deal with multi-scale earthquake cycle simulations with fine details in both time and space. It is equipped with user-friendly MATLAB and Python interfaces and graphical output utilities.

To get started with QDYN, see the documentation.

January 2020 | The QDYN team participated in the Community Code Verification Exercise for Simulating Sequences of Earthquakes and Aseismic Slip (SEAS), funded by SCEC. The results of this community benchmark exercise are now published in Seismological Research Letters (see also this preprint on EarthArXiv). A script to run these simulations in QDYN is included in the /examples/scec_benchmarks/BP2 directory.

29 August 2019 | QDYN version 2.2 has been released! This version is now more user-friendly than QDYN has ever been, with a new documentation website, Jupyter Notebooks, and automated testing for developers. See the release notes for details.

6 December 2018 | Results of QDYN earthquake cycle simulations on faults surrounded by damaged zones were presented at:

11 September 2018 | Results based on QDYN were highlighted at the 2018 WEGENER conference in the keynote presentation The spectrum of slip behaviors emerging from the interactions between seismic and aseismic slip by J. P. Ampuero (slides).

28 May 2018 | In order to address a problem in the QDYN history tree, the version history of the QDYN repository was rewritten. All developers that have cloned the QDYN repository before this date should follow the steps described in this manual. Users of QDYN that did not make any code changes can simply delete the old repository and clone the latest version to get a clean QDYN repository.

Apr 2017 | Earthquake cycle simulations with a micro-physics model of granular flow and ductile creep of fault gouges based on QDYN presented at the EGU General Assembly 2017, session on Earthquakes: from slow to fast, from the field to the laboratory:
M. van den Ende, J. Chen, J. P. Ampuero and A. Niemeijer (2017)
Earthquake and slow-slip nucleation investigated with a micro-physics based seismic cycle simulator
Geophysical Research Abstracts, Vol. 19, EGU2017-7249
Abstract PDF -- Presentation PPT

Nov 2014 | A QDYN tutorial session was offered at the School on "Earthquakes: nucleation, triggering and relationship with aseismic processes" at Cargese, Corsica, 3 - 10 November 2014

QDYN was previously hosted on GoogleCode and is now on Github. Both SVN and GIT version control systems are supported.

Previous (stable) versions of QDYN can be downloaded from the release page. Development versions are available as separate branches following the naming convention release/x.x.x.

To install QDYN please follow the Getting started section in the documentation.

Questions, feedback or suggestions can be submitted via our issue tracking system. 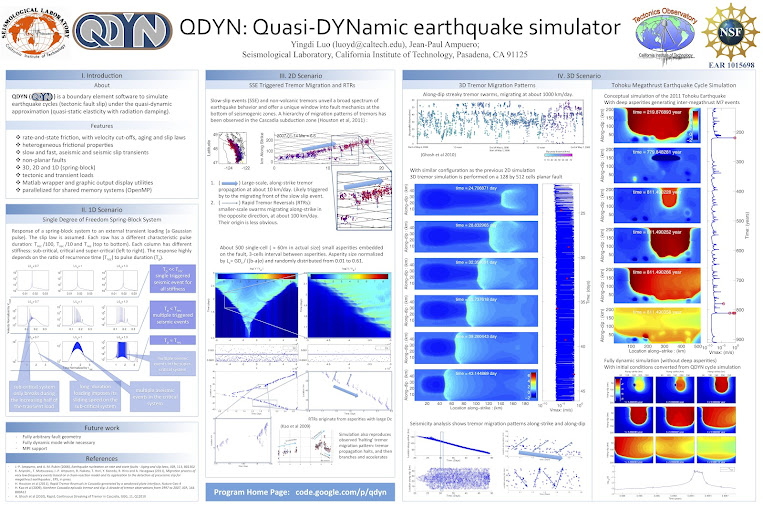 For all uses of the QDYN software

For simulations on heterogeneous faults

For the microphysically based (CNS) simulations

For simulations on faults surrounded by damaged zones