This is a simple social sharing application where users can post text messages and also list other users' messages (feed).

It is written to demonstrate how the application can be designed to work offline and properly sync with the server as network becomes available, with minimal distraction to the user experience.

This is not an official Google product.

On the topic of "offline design", many solutions depend on the particular use case but are applicable to different scenarios with small modifications. As such, this demo has its own synching logic and may not 100% match your use case. You should consider it as an example, study and then figure out how to apply a similar approach to your application. Unfortunately, there is no one fits for all solution for offline design.

Here, we'll explain how some of the user interaction flows work, which should give a better idea of what is going on in the application.

The sample project does not religiously follow any particular architectural pattern. Instead, it uses a hybrid approach that fits its own use case. It is designed with the assumption that it will grow into a large application (thus the complexity below). We chose this approach to make the demo as useful and realistic as possible despite the added complexity.

When a user hits the send button, the first 4 steps are:

(optional) 4.a. If the UI is visible, it updates itself after receiving the event.

Pay attention that the first steps did not include any steps requiring network connection yet we already have up to date information in the user interface and saved the necessary information to eventually sync the Post to server. 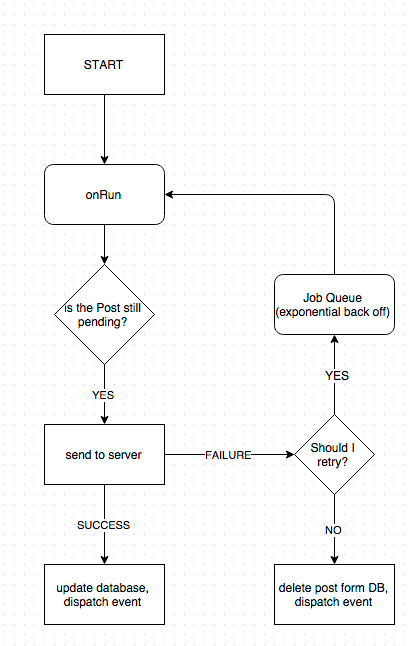 Synchronizing is managed by 3 components:

Keeping The UI Up to Date

The interaction between background and UI is well defined.

UI components take care of registering/unregistering to the EventBus depending on their lifecycles and since background components never directly reference UI components, we don't risk leaking them.

This is not the only way: The sample app uses a global EventBus. You can implement similar functionality using Rx or hand crafted listeners or any other similar technology. As always, do your own evaluation for your application.

The demo ships with a simple server but you will need Ruby on Rails to run it. The suggested way to install ruby is through Ruby Version Manager. After installing ruby and Rails, you can start the server as follows:

This will install the dependencies of the application and also create the database.

The demo app uses the host machine address in an emulator environment by default. (http://10.0.2.2:3000) If you run it in an emulator, it should work just fine, if not, you can change that address in the settings menu or by directly changing DemoConfig class.

Writing a mobile app means making peace with unreliable network. By using persistent jobs that run when network is available, the demo app does most of the work, but unfortunately it does not end there. `` Under unreliable network conditions, our application may hit a case where the data is saved in the server side but we could never received the success response, so the application still thinks the item is not posted and it will retry. Or even worse, it may happen if our server is having troubles.

Normally, this retry would mean duplication of the item. There are multiple strategies to solve this issue. The demo application uses a unique (userId, clientId) tuple to avoid duplicates. Here is how it works:

You can play with these edge cases by toggling error_before_saving_post and error_after_saving_post in the server/app/controllers/posts_controller.rb.