A prototype dashboard for the TTS bug bounty program.

This is a prototype dashboard for TTS's bug bounty program with HackerOne. 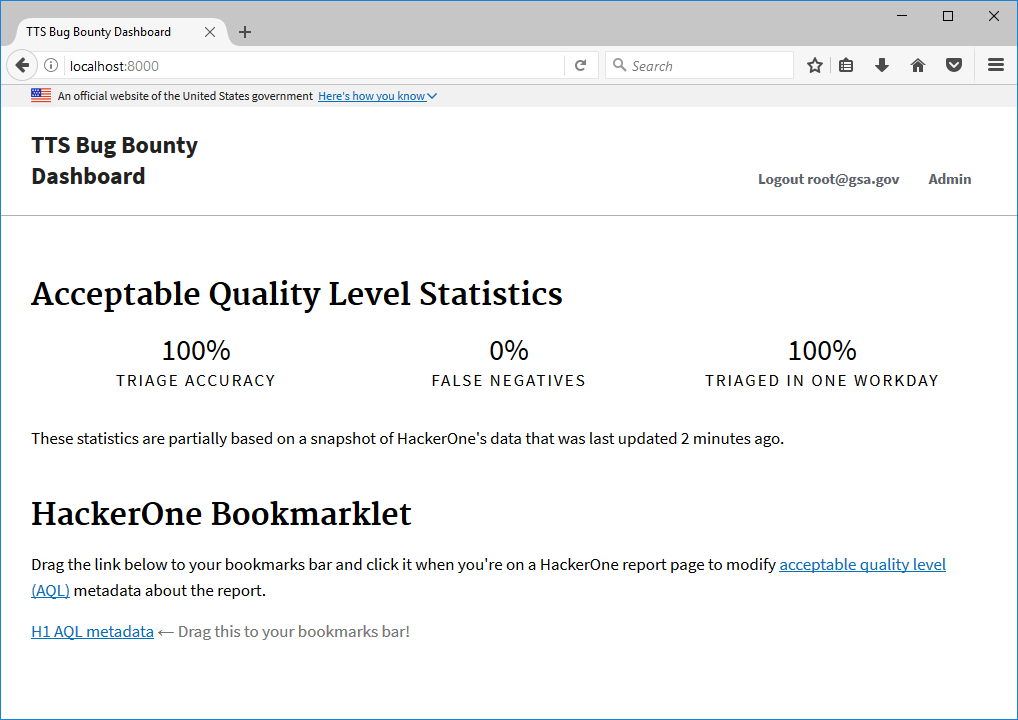 Then start the server with python manage.py runserver. When you visit http://localhost:8000 and are prompted for an email address, use:

Then visit localhost at the port defined by DOCKER_EXPOSED_PORT in your .env file.

To sync the app's database with HackerOne, run:

To run h1sync and other necessary tasks at periodic intervals, run:

Note that only one instance of this should ever be running at a time.

Unlike traditional Django settings, we use environment variables for configuration to be compliant with twelve-factor apps.

You can define environment variables using your environment, or (if you're developing locally) an .env file in the root directory of the repository.

Note: When an environment variable is described as representing a boolean value, if the variable exists with any value (even the empty string), the boolean is true; otherwise, it's false.

This project uses pytest/pytest-django for tests and flake8 for linting.

To run all tests with linting:

The following assumes you're deploying to the cloud via Amazon EC2.

These instructions assume that you want to deploy to the GovCloud instance of cloud.gov.

Most of the cloud.gov configuration is documented in the manifest.yml file at the root of the repository. Note that it mentions two applications:

Note that you may want to use a different AWS RDS plan than shared-psql if you actually have money.

Note that if your app doesn't get deployed to bbdash-dev.app.cloud.gov, you'll want to change that hostname.

Now create a service key to get the values you want to set UAA_CLIENT_ID and UAA_CLIENT_SECRET to when you configure your app (which you'll do very soon):

For cloud.gov deployments, this project makes use of a User Provided Service (UPS) to get its configuration variables, instead of using the local environment.

First, create a JSON file called credentials-dev.json with all the configuration values specified as per the environment variables documented in this README. DO NOT COMMIT THIS FILE.

Then enter the following commands to create the user-provided service:

At this point you should be ready to deploy the app to cloud.gov.

You can do this by running:

At this point your app should be live, but if you ran into problems, see the troubleshooting section below.

You will need to create a superuser account, after which you'll be able to login to the Django admin panel. The easiest way to create the initial superuser is to use cf ssh to get to the remote host and run python manage.py createsuperuser. You'll need to do some environment setup on the remote host, as described at Cloud Foundry's SSH docs.

If you need to, you can update the user-provided service with the following commands:

Note that if you do this and the app is already running, you'll need to restage it with cf restage.

Note that each application has a separate log, so you will need to look at each individually.

A prototype dashboard for the TTS bug bounty program.