ColPack is a package comprising of implementations of algorithms for the specialized vertex coloring problems discussed in the previous section as well as algorithms for a variety of related supporting tasks in derivative computation.

Vertex graph coloring problem is nothing but a way of labelling graph vertices under the constraints that no two adjacent vertices has the same lable (color). Here it is an example from wikipedia.

the table below gives a quick summary of all the coloring problems (on general and bipartite graphs) supported by ColPack.

All of the coloring problems listed in the above table are NP-hard. Their corresponding algorithms in ColPack are greedy heuristics in the sense that the algorithms progressively extend a partial coloring by processing one vertex at a time, in some order, in each step assigning a vertex the smallest allowable color. Listed beneath each coloring problem in the table is the complexity of the corresponding algorithm in ColPack. In the cases where ColPack has multiple algorithms for a problem (these are designated by the superscript †), the complexity expression corresponds to that of the fastest algorithm. In the complexity expressions,

The order in which vertices are processed in a greedy coloring algorithm determines the number of colors used by the algorithm. ColPack has implementations of various effective ordering techniques for each of the supported coloring problems. These are summarized in the table below.

Besides coloring and ordering capabilities, ColPack also has routines for recovering the numerical values of the entries of a derivative matrix from a compressed representation. In particular the following reconstruction routines are currently available:

Finally, as a supporting functionality, ColPack has routines for constructing bipartite graphs (for Jacobians) and adjacency graphs (for Hessians) from files specifying matrix sparsity structures in various formats, including Matrix Market, Harwell-Boeing and MeTis.

ColPack is written in an object-oriented fashion in C++ heavily using the Standard Template Library (STL). It is designed to be simple, modular, extensible and efficient. Figure 1 below gives an overview of the structure of the major classes of ColPack. 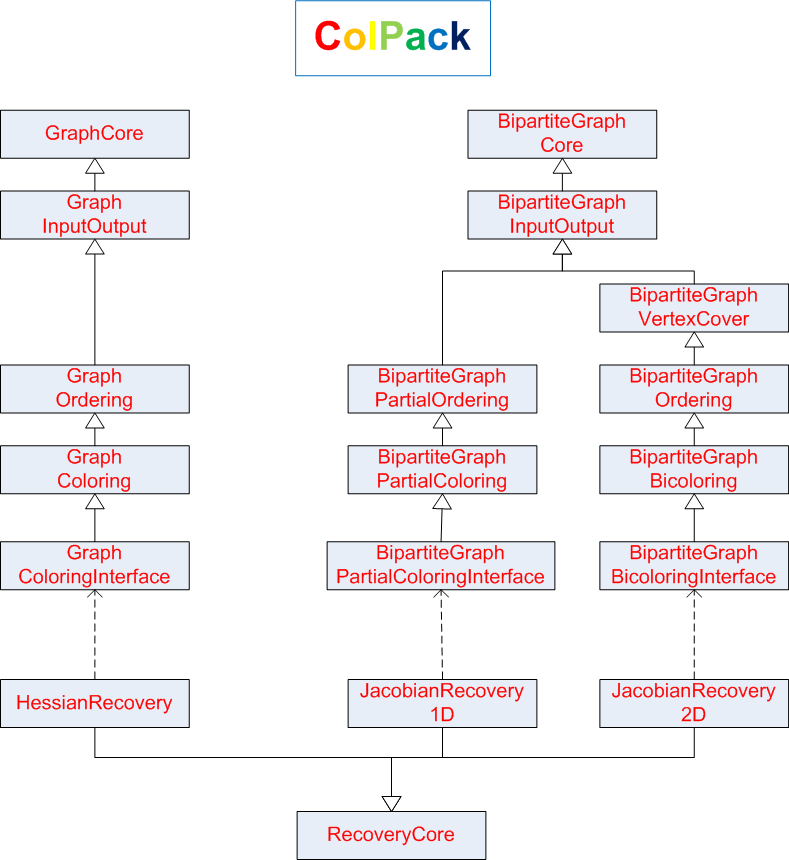 There are two ways to use ColPack, Try without Installiation and Build and Install. The former is fast and easy to use, but is vulnerable for various OS enviroments settings, thus it requires the user know how to modify the makefile if met some compiling issue. The later one is more robust and it will also collect the ColPack into a shared library which makes ColPack easy to cooperate with other applications. But it requires to pre-install automake(or CMake) software.

Try ColPack by Compile and Run without Installation

You can just try ColPack by download, compile and run it. This is the fastest and simplest way to use ColPack. Do the following instructions in terminals.

After all source codes been compiled, we will generate a executable file ColPack under current folder.
The above instruction are tested under Ubuntu system. You may need to modify the Makefile to fit the different OS environments and compilers.(delete -fopenmp for mac os. Replace -fopenmp to -Qopenmp )for intel compiler.)

Install ColPack makes ColPack easy to use and it can also decreases the size of the execuable file. GNU autotools and CMake are supported. To install ColPack using autotools (requires that have installed automake on your machine.), follows the instructions below.:

Append --disable-openmp to ./configure above if you need to disable OpenMP.(MAC user and some Windows user)

ColPack also has support for building with CMake, which you can do via the following:

If not using-DCMAKE_INSTALL_PREFIX:PATH, the library files will be installed under /usr/lib/ by default which may requires privilege.

You can build ColPack's static library on Windows using Visual Studio (tested with Visual Studio 2015) and CMake. Note, however, that you are not able to use OpenMP (Visual Studio supports only OpenMP 2.0), and cannot compile the ColPack executable (it depends on the POSIX getopt.h).

If you are using CMake 3.4 or greater, you can build and use ColPack's shared library. If you have an older CMake, we still build the shared library, but you will not be able to use it because none of the symbols will be exported (Visual Studio will not generate a .lib file).

On Windows, the examples link to the static library instead of the shared library.

Unlike on UNIX, the static library is named ColPack_static (ColPack_static.lib) to avoid a name conflict with the shared library's ColPack.lib.

Finally, some of the examples do not compile, seemingly because their filenames are too long.

Another recommend altinative way is to install an Ubuntu system on your MAC with VirtualBox (or any other virtual machine software), then install ColPack on your virtual machines.

After the Build, Use ColPack as Installed Library

After the build, we have already generate an shared library under the $fullpath directory, and an executable file 'ColPack' under the colpack root directory. And you can use it. However if you want to write your own code and use ColPack as an shared library. Then follow the following ways:

We provide a template codes in Example_Use_Library

The best source for citing this work