Particle-in-Cell Simulations for the Exascale Era 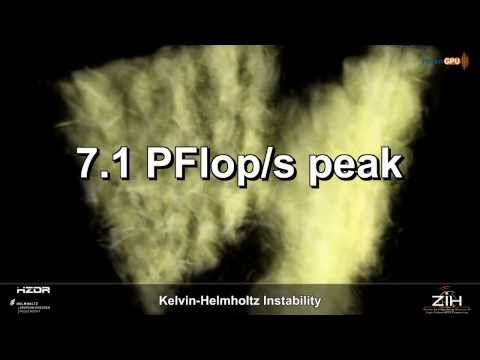 PIConGPU is a fully relativistic, manycore, 3D3V particle-in-cell (PIC) code. The Particle-in-Cell algorithm is a central tool in plasma physics. It describes the dynamics of a plasma by computing the motion of electrons and ions in the plasma based on Maxwell's equations.

PIConGPU implements various numerical schemes to solve the PIC cycle. Its features for the electro-magnetic PIC algorithm include:

and the electro-magnetic PIC algorithm is further self-consistently coupled to:

Besides the electro-magnetic PIC algorithm and extensions to it, we developed a wide range of tools and diagnostics, e.g.:

As one of our supported compute platforms, GPUs provide a computational performance of several TFLOP/s at considerable lower invest and maintenance costs compared to multi CPU-based compute architectures of similar performance. The latest high-performance systems (TOP500) are enhanced by accelerator hardware that boost their peak performance up to the multi-PFLOP/s level. With its outstanding performance and scalability to more than 18'000 GPUs, PIConGPU was one of the finalists of the 2013 Gordon Bell Prize.

PIConGPU is developed and maintained by the Computational Radiation Physics Group at the Institute for Radiation Physics at HZDR in close collaboration with the Center for Information Services and High Performance Computing (ZIH) of the Technical University Dresden (TUD). We are a member of the Dresden GPU Center of Excellence that cooperates on a broad range of scientific GPU and manycore applications, workshops and teaching efforts.

PIConGPU is a scientific project. If you present and/or publish scientific results that used PIConGPU, you should set a reference to show your support.

Our according up-to-date publication at the time of your publication should be inquired from:

Please also consider adding yourself to our community map. We would love to hear from you!

The following slide should be part of oral presentations. It is intended to acknowledge the team maintaining PIConGPU and to support our community:

PIConGPU is licensed under the GPLv3+. Furthermore, you can develop your own particle-mesh algorithms based on our general library PMacc that is shipped alongside PIConGPU. PMacc is dual licensed under both the GPLv3+ and LGPLv3+. For a detailed description, please refer to LICENSE.md

See our notes in INSTALL.rst.

Dear User, please be aware that this is an open beta release! We hereby emphasize that we are still actively developing PIConGPU at great speed and do, from time to time, break backwards compatibility.

When using this software, please stick to the master branch containing the latest stable release. It also contains a file CHANGELOG.md with the latest changes (and how to update your simulations). Read it first before updating between two versions! Also, we add a git tag according to a version number for each release in master.

For any questions regarding the usage of PIConGPU please do not contact the developers and maintainers directly.

Before you post a question, browse the PIConGPU documentation, wiki, issue tracker and the mailing list history to see if your question has been answered, already.

PIConGPU is a collaborative project. We thus encourage users to engage in answering questions of other users and post solutions to problems to the list. A problem you have encountered might be the future problem of another user.

Main ressources are in our online manual, the user section of our wiki, documentation files in .md (Markdown) and .rst (reStructuredText) format in this repository and a getting started video. Feel free to visit picongpu.hzdr.de to learn more about the PIC algorithm.

PIConGPU follows a master - dev development model. That means our latest stable release is shipped in a branch called master while new and frequent changes to the code are incooporated in the development branch dev.

Every time we update the master branch, we publish a new release of PIConGPU. Before you pull the changes in, please read our ChangeLog! You may have to update some of your simulation .param and .cfg files by hand since PIConGPU is an active project and new features often require changes in input files. Additionally, a full description of new features and fixed bugs in comparison to the previous release is provided in that file.

In case you decide to use new, potentially buggy and experimental features from our dev branch, be aware that support is very limited and you must participate or at least follow the development yourself. Syntax changes and in-development bugs will not be announced outside of their according pull requests and issues.

Before drafting a new release, we open a new release-* branch from dev with the * being the version number of the upcoming release. This branch only receives bug fixes (feature freeze) and users are welcome to try it out (however, the change log and a detailed announcement might still be missing in it).

If you like to jump in right away, see

Former Members, Contributions and Thanks

The PIConGPU Team expresses its gratitude to:

Kudos to everyone, mentioned or unmentioned, who contributed further in any way!

Particle-in-Cell Simulations for the Exascale Era