PSPDFKit for iOS wrapper for the Xamarin platform.

The PSPDFKit SDK is a framework that allows you to view, annotate, sign, and fill PDF forms on iOS, Android, Windows, macOS, and Web.

PSPDFKit offers support for customers with an active SDK license via https://pspdfkit.com/support/request/

Are you evaluating our SDK? That's great, we're happy to help out! To make sure this is fast, please use a work email and have someone from your company fill out our sales form: https://pspdfkit.com/sales/

In order to build this binding project you need:

Step 1 - Get the bindings

There's 2 ways for integrating PSPDFKit into your project. We highly recommend using our nuget packages from nuget.org in Visual Studio as it requires less work for the customer and also eliminates the possibility of build errors, which can happen from time to time. 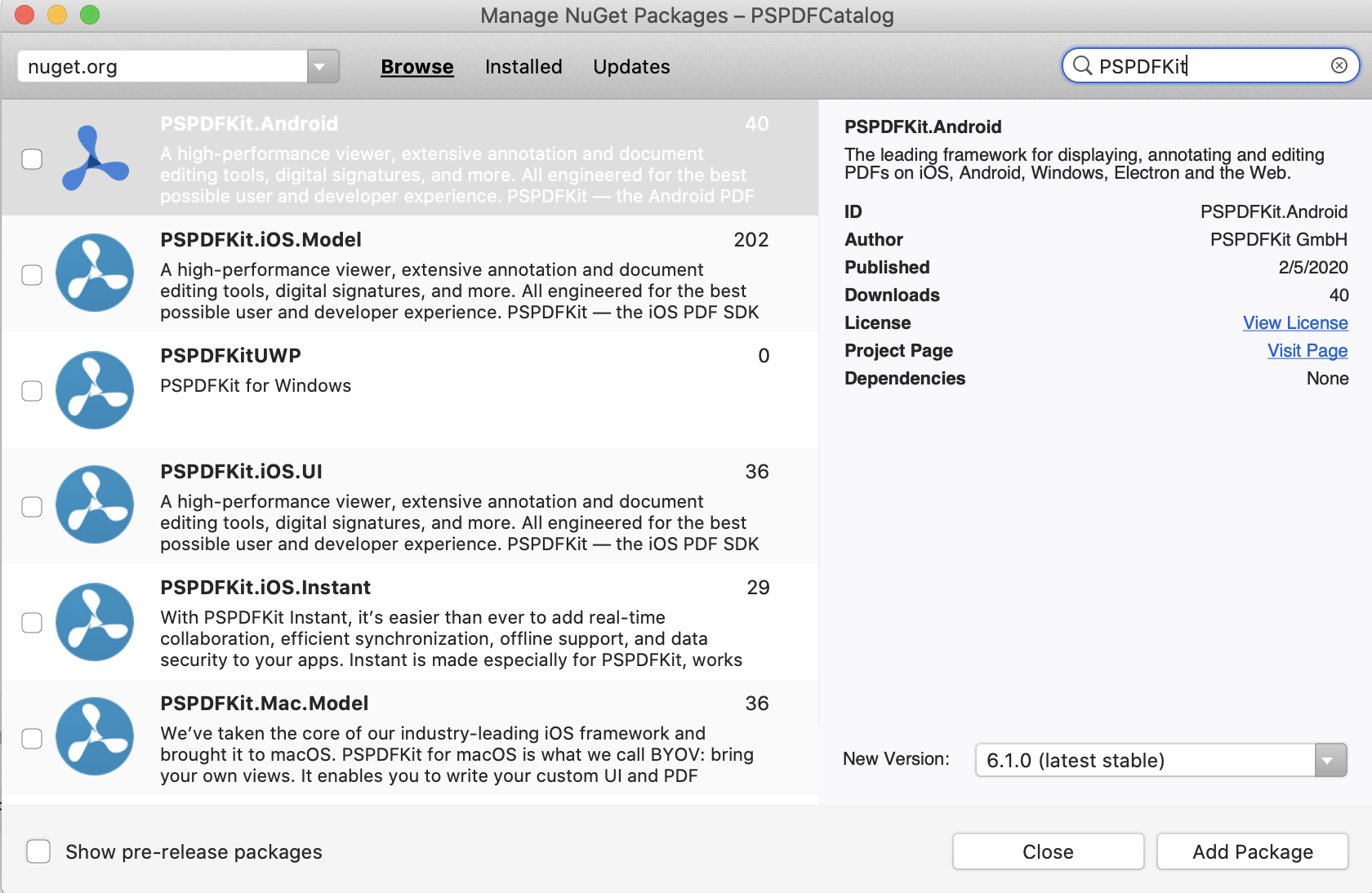 * Items with an asterisk are optional, you only need to add those if you also want to use the components.

Now you are done and can skip to step 3!

We are using Cake as our build system, this allows us to build on both Windows and macOS from a single script.

We use the Default build task which builds all binding projects as long as the frameworks are present inside each directory (see Copy required files), if an optional framework is not present this Task will just skip.

In the case you just want the Mac bits to be built you can do ./build.sh --target mac. Here are the most common tasks available in the build script, they are particularly useful when you are integrating this into a CI Server.

To list all available tasks you can do ./build.sh --showdescription.

Step 3 - Using PSPDFKit in your project

If you don't use nuget, add the generated PSPDFKit dlls as a reference to into your own Xamarin project and add the corresponding using statements depending on the dlls referenced into your project.

Also you do need to set your license key early on in your AppDelegate, before accessing any other PSPDFKit classes. You can get your license key from your customer portal if you haven't done so already, or request an evaluation version

Support for Instant was added with the Xamarin.iOS Bindings for PSPDFKit 7.2.0 for iOS.

With PSPDFKit Instant, it’s easier than ever to add real-time collaboration features to your PSPDFKit-powered app, allowing your users to seamlessly share, edit, and annotate PDF documents across iOS, Android, and web. With just a few lines of code, PSPDFKit Instant gives your users a massive productivity boost.

For more information about Instant, please have a look at our website.

You can find several sample projects in the Examples folder, including a catalog, Xamarin.Forms, and macOS example.

How to Run the Example Projects

4. Tap on the triangle on the left to run the project.

This example is included in the PSPDFCatalog example, but you can also find the code here.

The PSPDFKit Instant example shows how easy and efficient Instant works. Just go the Instant demo page and tap on Instant on iOS, this will show a code at step three, which you have to enter in the example on your device. Afterwards you'll be connected to the server and you can start testing!

The PSPDFKit Catalog project includes various examples for pretty much every use-case and will help you to build your own app with PSPDFKit. The XFSample.iOS project is an example showcasing how to build an app with PSPDFKit using Xamarin.Forms. MacPDFViewer is an easy example on how build a PDF viewer on Mac. However, only doing this will then get your app rejected by the App Store due to the following error:

This is due to the fact that Xamarin does not officially support wrapping Swift libraries, so when creating the archives Visual Studio will not create the necesseray SwiftSupport folder there. To fix this there is a workaround available.

Since Xcode properly supports wrapping Swift libraries, we can just submit it from here and let Xcode do the work of creating the archives properly.

Please ensure you signed our CLA so we can accept your contributions.

PSPDFKit for iOS wrapper for the Xamarin platform.