This repository holds the code for the WizardBattleArena game.

This repository holds the code for the WizardBattleArena game. A preview of the game can be seen on youtube (Click the image to watch the video): 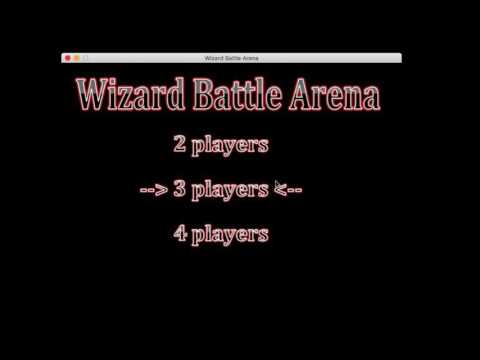 The game is a bomberman-like with Liberated Pixel Cup graphics (In short, all graphics are licensed under CC BY-SA 3.0). The game itself is under GPLv2 licence.

The game is entirely written/scripted from Pharo. For high-performance graphics and responsiveness, the code relies on SDL2 to manage OS windows and keyboard event handling and on Cairo to draw the 2D graphics on the SDL2 window surface.

Currently the game is more meant as a demo to show how to build native 2D interactive applications running easily at 50 fps from Pharo. However, multiple people played and had a lot of fun: this could be the basis of a very good video game.

There are two packages at the root. The Demos package includes ready-to-go games that I use for demos. The packages are not meant to be changed, unless you're updating the game for a specific OS version. The Project package includes two folders, the ressources folder with all the ressources used by the game (images, music, etc.) and the src folder with the source code. The src folder is itself divided into Wizard-Battle-Arena, the package holding the game, and Wizard-Battle-Arena-Extras, the package holding future or experimental features.

To demo, download one of the demo folder and use the scripts (startMac or startLinux). The idea is to demo by starting the VM headless, open the UI outside of the Morphic infrastructure, and close the image when the main SDL2 window is killed.

Note: The Mac demo works up to Mac OS X 10.12. For Mac OS X 10.13 and onwards (High Sierra), there are no known working VMs. Recent VMs works on Mac OS X 10.13, but they have a SDL2 bindings where keyboard events have bad interactions with Pharo event handling, leading the game to be unplayable. Old VMs are incompatible due to Apple changes.

OS and base image

Note: I tried 32bits runtime on Ubuntu 64 with 32 bits libs and it worked, but I did not try on an actual 32 bits Ubuntu.

Note: The Mac development environment works up to Mac OS X 10.12. For Mac OS X 10.13 and onwards (High Sierra), there are no known working VMs. Recent VMs works on Mac OS X 10.13, but they have a SDL2 bindings where keyboard events have bad interactions with Pharo event handling, leading the game to be unplayable. Old VMs are incompatible due to Apple changes.

Then load the following image and VM:

Then you can just drag and drop the image over the VM to run it or build your own start-up scripts.

Using MinGW, the game work when I do:

On more recent Windows, I believe it should work exactly the same way. On very recent or upcoming Windows releases, I guess there could be a problem with missing 32 bits libs. You could try using Pharo 64 bits, but on Windows there are know bugs (I'm talking mid-2017) I don't want to deal with right now. So I guess you would have to track down the missing 32 bits libs and install them somehow.

Important Note: on Windows 64, the SDL2 window looks awckward. It's a known annoying bug due to strange 32 - 64 bits interactions, but the game still works. You can try starting the game in full screen (Change this in WBAScreen by setting the OSWindowAttribute fullscreen to true) to avoid most of the problem.

Make sure your image file is in the Project folder, near the src and resources folders (important for relative paths).

Open your image with the provided VM.

In addition, load, if you want to, the Wizard-Battle-Arena-Extras package (unreleased and experimental contents).

On Linux usually you need to update Cairo, so try to update libCairo and retry.

On Mac usually the problem lies with SDL2, so try to install / update it and retry.

If you've installed something, restart your computer, it may help too (for some reason it helped me on Mac to deal with some SDL2 bugs after updating the librairies).

Have fun toying around with the game

This repository holds the code for the WizardBattleArena game.