Some documentation for this app is also on my website.

This repository contains source code and setup instructions for PokerTexter, an SMS app that gives you an advantage when playing Texas Hold 'Em. Running the app will let you text the PokerTexter phone number with your cards and number of other players, and it texts you back some pre-flop statistics:

For example: suppose you're playing Poker with three other people. You are dealt a nine of hearts and a seven of clubs. You message PokerTexter that you have a nine and a seven unsuited with three other players. It texts you back that your probability of winning the hand is 21.52%, your probability of tying is 2.82%, and your expected unit gain is -0.111. Since the expected unit gain is negative, i.e. on average you will lose $0.111 on a bet of $1, it would be unwise to play the hand. 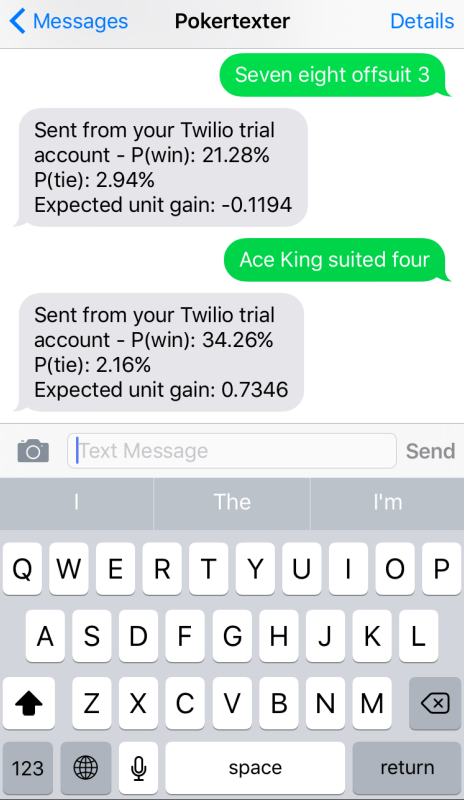 Following is a list of items in this repository and notes on what they're for:

Following are the steps you need to take to get PokerTexter to run. Note that these instructions are dated April 12, 2016: certain steps may change if either Twilio or Heroku adjust their product or infrastructure in any way.

If you make any changes to run-pokertexter.py or to any of the other files in PokerTexter, you will need to relaunch the app for the changes to propagate. You can relaunch easily by typing ./launch. No other steps will be necessary, unless you create a new Heroku app and thereby create a new Heroku app URL, in which case you'll need to amend your Twilio Numbers Page appropriately.

This instruction set assumes that you're using the Twilio free trial. Regrettably, to remind you that you're on their "free" tier, they prepend "Sent from your Twilio trial account -" to every text message that PokerTexter sends. You can immediately fix this by upgrading from Twilio free to Twilio Hobby, but that costs $7 a month.

There are some other limitations on the app because you're using both Twilio's and Heroku's free tiers. Heroku's free tier lets you run an app only for 18 hours out of 24. Realistically, this should not be a problem. If you want to run an app for more than 18 hours out of 24, you'll need to recreate it after 18 hours to avoid the limit. There are also a few limits to Twilio's free tier, though none that are immediately of concern.

The scope of this app is currently quite limited: it doesn't permit you to submit cards beyond your initial two. It is easily possible to also support additional known cards (e.g. cards on the table, known burned cards, etc.) but the usefulness of such features is limited because additional cards are made known only in the later stages of the game, when probability can be more easily intuitively approximated (it's easy to figure out your outs and their approximate odds), and the psychological aspect of the game becomes more important. Nonetheless, I aim to add such features in the near future.

The app currently does not compute ties correctly for more than two players. When any two hands on the table tie, the entire table is interpreted to have tied -- even though in reality, only the best two hands tie and split the pot. PokerTexter is currently written such that the entire table ties, i.e. everyone gets back their initial bet. Thankfully, ties are generally so rare such that expected gain is only minimally affected. However, this is by far the most serious flaw currently present in the software.