meteo-qt is an application to display weather information in desktop panels, desktop notifications and its own window. 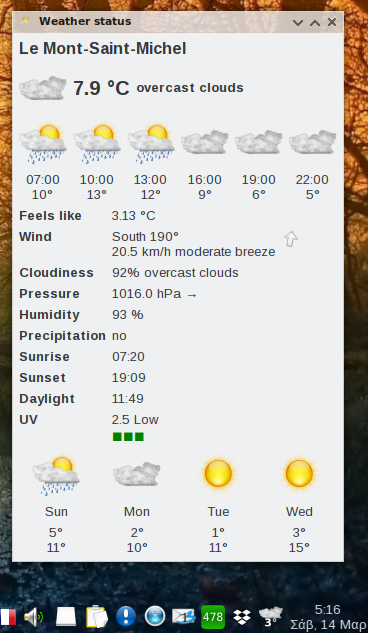 Weather data is taken from OpenWeatherMap. The application is based on Python 3 and Qt 5. It is licensed under the GNU General Public License version 3 (GPLv3).

After satisfying some runtime dependencies meteo-qt can be run right from the source tree. Installing is possible as well and relying on on a file setup.py as commonly used in Python. This enables every regular user to run the application and updates the translations comprised in the code. Also, some binary packages are available. The following sections will describe all three approaches stating some major Linux distributions as example.

These are PyQt, SIP and lxml which can be installed as follows:

(SIP packages stated for the sake of completeness only. In fact they all are a dependency of the respective PyQt packages.)

Running from the sources

Installation from the sources

In addition to the runtime dependencies stated above binariespylupdate5 of PyQt and lrelease of Qt Linguist are needed.

Binary lrelease still comes as Qt 5 and 4 version in all major distributions so it must be ensured the former is used. This document describes how to achieve this by tweaking the system-wide settings of qtchooser which is available on Arch Linux, Debian and Fedora while a manual approach has to be taken on openSUSE. The corresponding changes may or may not be reverted after installing meteo-qt depending on the needs of the respective system. To test whether lrelease is configured properly run $ lrelease -version which should output the desired Qt version like 5.5.1.

where the architecture, here x86_64-linux-gnu, may have to get adjusted to the current system.

After installing that way a binary meteo-qt will be placed in $PATH, a desktop entry file meteo-qt.desktop in $XDG_DATA_DIRS/applications making the application available in the usual panel main menus.

After installation you will be prompted to do a right click on the system tray icon to configure the cities, units and other settings for the weather informations and the application.

Not much to say. The window providing verbose information as depicted above will display upon left clicking the panel icon, a context menu coming up on right-click is providing several configuration options all of which should be pretty self-explanatory.