Sign up
Implementation of the KadCast Network layer.
Find file

Vanilla networking types have broadcast operations which show a high complexity of O(N*R). Requests on this model, add one RTT for each hop, which ends being a big propagation delay in networks with a considerable amount of nodes.

Kadcast leaves out of scope privacy concerns on the P2P layer.

Kadcast is built on the top of Kademlia and makes usage of its bases in order to then improve the broadcast timings/performance and the resiliance of the network. 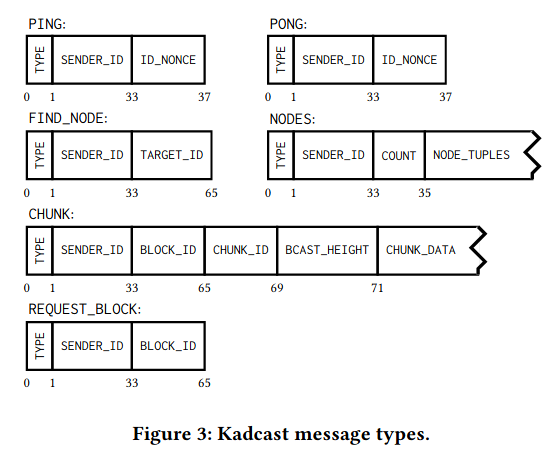 Kadcast is an UDP-based peer-to-peer protocol in which nodes for a structured overlay. (It can be build agnostigly to the transport protocol used, but we will supose UDP for now.)

All of the nodes have an unique identifier which is generated when they join the network and it's tipically the hash of the private key or the public key and has a length of k bits.

This ID determinates the position of the node in a binary routing tree. That's the basics of the Kademlia system.

Nodes mantain the routing state classifiing other nodes in k-buckets storing for each node the triplet: (ip_addr, port, ID.

Each bucket is a list of the k last recently seen nodes at a certain distance in relation to our node.

The factor K is a system-wide parameter which determines the routing state and the lookup complexity.

This distance corresponds to the non-euclidean XOR metric which represents: d(x,y) = (x ^ y). And that implies that each node holds K buckets where on each bucket we can fit the nodes that have a distance 2^i <= d < 2^(i +1).

By doing this the protocol favors the old and stable nodes on the network.

This is the process a node has to do in order to join the P2P network. The main goal is to connect to the boostrap nodes and then, retrieve info about the rest of the peers of the network in order to fill our buckets with neighbours.

Starts just after the boostraping process. The main goal is to fill up the k-buckets with k different nodes.

Note that like the bucket size, 𝛼 and k are global constants that will determine the redundancy and overhead of the network. The typical values are: k = [20, 100] & 𝛼 = 3.

In my head this should be done for each bucket until we don't get closest nodes or either, the bucket is full.

Each node periodically refreshes every bucket it has not seen some activity from in the last hour: for each such bucket, it picks a random ID with appropriate distance and performs a look up to populate its buckets with fresh routing information.

For this propagation process, we will use the CHUNK messages and the redundant broadcasting algorithm purposed on the Kadcast paper.

Improving the broadcast Reliability and Performance

This increases the probability of at least one honest node receiving the message.

As each broadcast process is repeated on every hop (decreasing the height), therefore Kadcast nodes ignore duplicate CHUNK messages. 2) Kadcast has to consider transmission failures. Due to that, Kadcast employs forward error connection schemes based on RaptorQ The FEC overhead factor can be adjusted through the paramenter f = (n-s)/s. Need to review RaptorQ paper to get this more clear.

With the benchmarks it's demonstrated that we can get full network coverage even assuming a 12% packet-loss ratio with a β = 3 & f = 0,15. This can be improved or decreased according to our needs.

This section will be expanded once we get closer to a basic protocol implementation. ATM, the paper gives solutions for DOS, Sybil and Eclipse attacks and obstruction of block delivery.