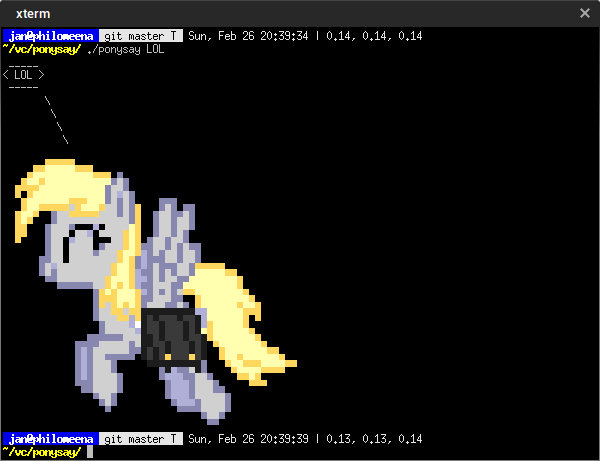 Today your terminal, tomorrow the world!

coreutils: stty in coreutils used to determine size of the terminal.

python>=3: ponysay is written in Python 3.

python>=3: The installation process is written in Python 3.

Run ./dependency-test.sh if things are not working for you.

Installation on GNU/Linux (or other Unix implementations)

In order to use ponysay, run:

Or if you have a specific pony in your mind:

The package is in the official repositories as community/ponysay. A Git version is also present, named ponysay-git in AUR thanks to an upstream.

A git version of the package is available as ponysay-git in CCR, alongside a stable package called ponysay thanks to an upstream.

Debian packages thanks to 'vcheng' can be found here.

Running ponysay on Docker thanks to 'mpepping' is a easy as:

The package is in the official Gentoo repository as games-misc/ponysay.

A ponysay Homebrew formula is available.

You could either run ponysay on:

The package is available in OpenSuSe 13.2 and Factory since 6th april 2014, if you want the individual rpm look here.

There is a PPA available thanks to 'vincent-c', specifically for ponysay, containing packages for all currently supported Ubuntu releases here.

This requires the fortune utility to be installed. It can install be from the distribution's repositories (might be named fortune-mod). Alternatively, one can just fetch the source code from here.

You can try this script or ponypipe to ponify fortunes.

Edit your ~/.bashrc and add this to the end of the file

Afterwards, every time you open a terminal a pony should give you a fortune.

Running ponysay -q will print a random pony saying one of its quotes from My Little Pony: Friendship is Magic. The pony can be specified: ponysay -q pinkie. Just as with -f, -q can be used multiple times to specify a set of ponies from which a single one will be selected randomly.

When running ponysay -l or ponysay -L the ponies with quotes will be printed in bold or bright (depending on the used terminal).

If you have a custom colour palette edit your ~/.bashrc and add

Read the PDF or info manual for more information.

Q: The output looks like a mess in (TTY/PuTTY/other)!

A: Unfortunately we cannot make it perfect, see issue 1. But we have done a lot, read more about how to get the best of the current state of the art has to offer in the manual.

Q: The output looks like a mess in (xfce4-terminal/mate-terminal/xterm/[...]) with (this) font!

A: We use blocks for printing the ponies, if the blocks are misaligned, or if you do not use a truly monospaced font with aligned blocks try another monospaced font, such as 'Fixed [...]' or 'Liberation Mono.'

Q: You are missing (my-favourite-pony)!

Q: Which programs do you use to generate the pony files?

A: The pony files are in fact mostly a bunch of selected browser ponies, converted using util-say, Other are taken from desktop ponies, and the others are created specifically for ponysay.

A: Well, most dev and contributors has moved to more time consuming tasks so our time has been reduced, but we accept most PR for bugfixs and ponies (correctly built) and we're still looking for bug fixes and ponies, so stay tuned for the next release or pushes on the repository.

The PDF manual should answer most of your questions.

Happy MLP Movie release... the one with only ponies. Latest
+ 39 releases