micropyGPS is a full featured GPS NMEA sentence parser for use with MicroPython and the PyBoard embedded platform. It's also fully compatible with Python 3.x

Install by cloning from git and running install via setuptools.

To uninstall use the following pip command.

micropyGPS is easy to use: copy micropyGPS.py into your project directory and import the MicropyGPS class into your script. From there, just create a new GPS object and start feeding it data using the update() method. After you've feed it an entire valid sentence, it will return the sentence type and the internal GPS attributes will be updated. The example below shows the parsing of an RMC sentence and the object returns a tuple with the current latitude data

The object will continue to accept new characters and parse sentences for as long as it exists. Each type of sentence parsed can update different internal attributes in your GPS object.

If you have pytest installed, running it with the test_micropyGPS.py script will parse a number of example sentences of various types and test the various parsing, logging, and printing mechanics.

Data successfully parsed from valid sentences is stored in easily accessible object variables. Data with multiple components (like latitude and longitude) is stored in tuples.

Current speed is stored in a tuple of values representing knots, miles per hours and kilometers per hour

The timezone can be automatically adjusted for using the by setting the local_offset when you create the object or anytime after. Setting it to -5 means you are on Eastern Standard time in the United States.

The current UTC date is stored (day,month,year). NOTE: The date is not currently adjusted to match the timezone set in local_offset.

Signal quality and individual satellite information is collected from GSV, GSA, and GGA sentences and made available in the following variables.

The satellite_data_updated() method should be check to be True before trying to read out individual satellite data. This ensures all related GSV sentences are parsed and satellite info is complete

The amount of real time passed since the last sentence with valid fix data was parse is also made available. NOTE: On the pyBoard, this value is returned in milliseconds while on Unix/Windows it is returned in seconds.

micropyGPS currently can do very basic automatic logging of raw NMEA sentence data to a file. Any valid ASCII character passed into the parser, while the logging is enabled, is logged to a target file. This is useful if processing GPS sentences, but want to save the collected data for archive or further analysis. Due to the relative size of the log files, it's highly recommended to use an SD card as your storage medium as opposed to the emulated memory on the STM32 micro. All logging methods return a boolean if the operation succeeded or not.

Several functions are included that allow for GPS data to be expressed in nicer formats than tuples and ints.

Test scripts are included to help get started with using micropyGPS on the pyboard platform. These scripts can be copied over to the pyboards internal memory or placed on the SD Card. Make sure, when running them on the pyboard, to rename script you're using to main.py or update boot.py with the name of script you wish to run.

An example of how to hookup the pyboard to the Adafruit Ultimate GPS Breakout (minus the PPS signal needed in the external interrupt example) is shown below. 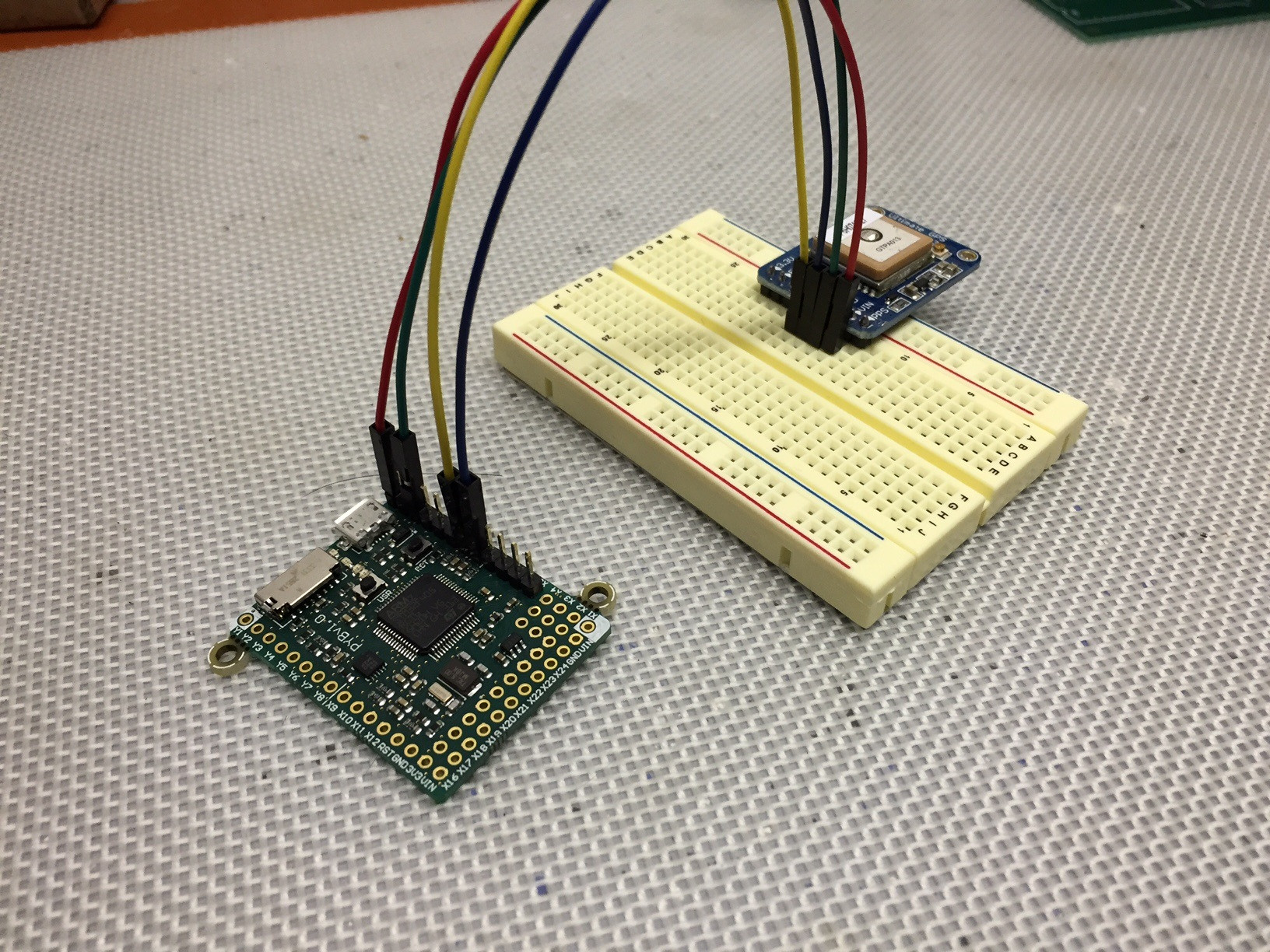 You can follow the setup instructions for the pyboard. The only difference is, that you shoud use micropyGPS as a frozen module. Otherwise there will be exceptions, because there is not enough heap space available.

As mentioned above, micropyGPS also runs on Python3.x (that's where most of the development was done!). This is useful for testing code or just parsing existing log files.

Beyond the pyBoard and ESP32, micropyGPS should run on other embedded platforms that have an Python3 interpreter such as the Raspberry Pi and BeagleBone boards. These other devices are currently untested.