Banditore retrieves new releases from your starred GitHub repositories and generate an Atom feed with them, just for you.

Banditore retrieves new releases from your GitHub starred repositories and put them in a RSS feed, just for you. 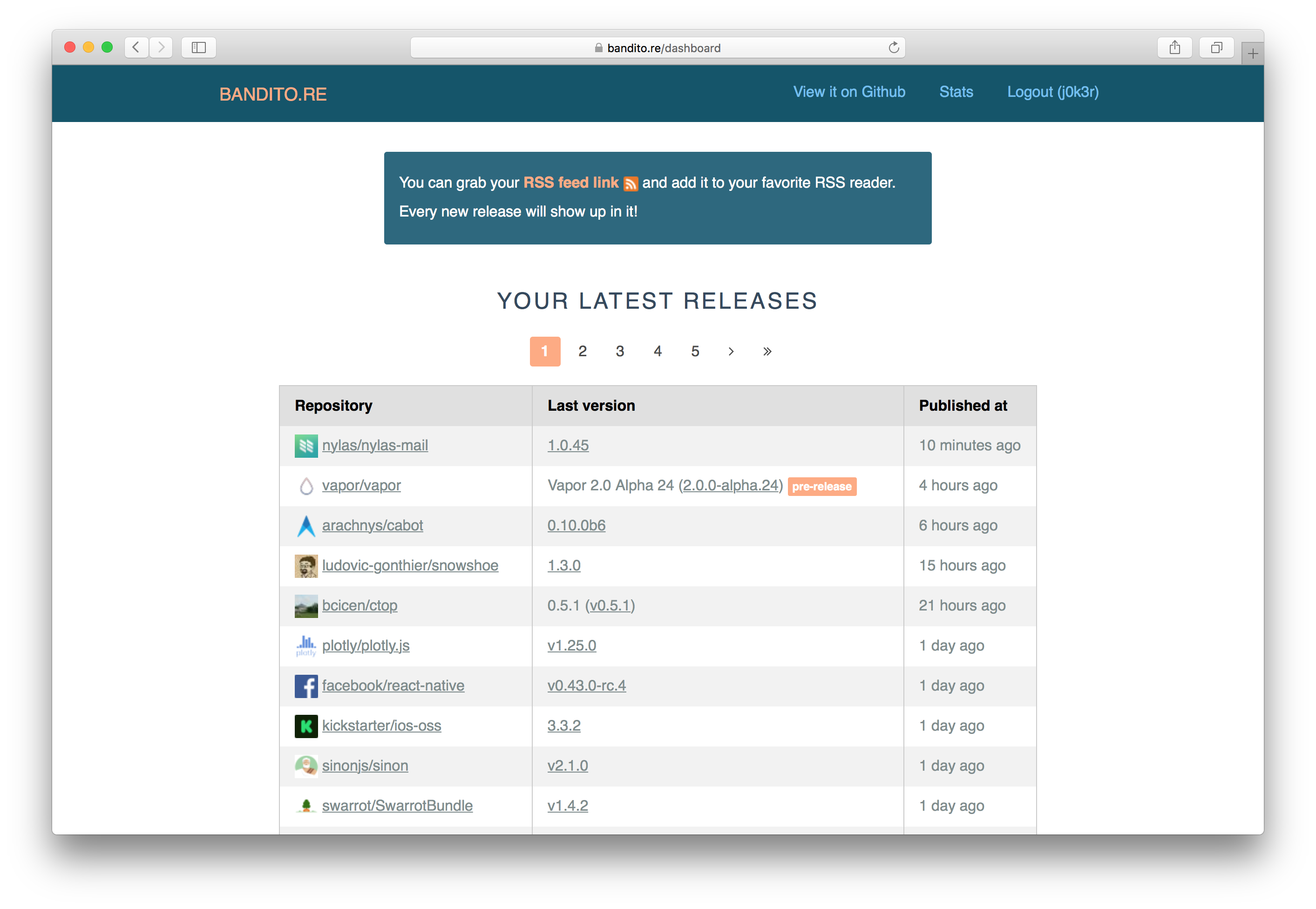 Once the website is up, you now have to setup few things to retrieve new releases. You have two choices:

You just need to define these 2 cronjobs (replace all /path/to/banditore with real value):

There is a status page available at /status, it returns a json with some information about the freshness of fetched versions:

For example, I've setup a check on updown.io to check that status page and if the page contains "is_fresh":true. So I receive an alert when is_fresh is false: which means there is a potential issue on the server.

If you plan to contribute (you're awesome, I know that ), you'll need to install the project in a different way (for example, to retrieve dev packages):

By default the test connexion login is root without password. You can change it in app/config/config_test.yml.

Ok, if you goes that deeper in the readme, it means you're a bit more than interested, I like that.

This is the complex part of the app. Here is a simplified solution to achieve it.

It's not as easy as using the /repos/:owner/:repo/releases API endpoint to retrieve latest release for a given repo. Because not all repo owner use that feature (which is a shame in my case).

All information for a release are available on that endpoint:

Check a new release of that repo as example: https://api.github.com/repos/j0k3r/banditore/releases/5770680

Some owners also use tag which is a bit more complex to retrieve all information because a tag only contains information about the SHA-1 of the commit which was used to make the tag. We only have these information:

After retrieving the tag, we need to retrieve the commit to get these information:

This is the most important piece of the app. One thing that I ran though is hitting the rate limit on GitHub. The rate limit for a given authenticated client is 5.000 calls per hour. This limit is never reached when looking for new release (thanks to the conditional requests of the GitHub API) on a daily basis.

But when new user sign in, we need to sync all its starred repositories and also all their releases / tags. And here come the gourmand part:

To avoid hitting the limit in such case and wait 1 hour to be able to make requests again I created the GitHub Client Discovery class. It aims to find the best client with enough rate limit remain (defined as 50).

Banditore retrieves new releases from your starred GitHub repositories and generate an Atom feed with them, just for you.