I was working on a new user profile component for my company. One of its elements is a combination of an avatar and a progress bar. First design that I got from our graphic design team looked like this: 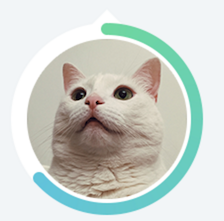 Rounded avatar and a white bubble in the background can be easily created with CSS. Progress bar is definitely the most challenging element. I considered three ways of building it:

Looking through the different CSS pie chart implementations I decided that CSS is not fitted for the job. All solutions were hacks that would be hard to control. I was also worried that it will be cumbersome to make it work on all the browsers that we support. Canvas, with almost universal support, seemed more appealing. However, canvas would require me to implement timing (e.g. easing functions) and scaling (to support higher dpis) myself. Besides, I though that it would not utilize GPU as well as CSS transitions/transforms. SVG seemed like the best of both worlds: it's universally supported, doesn't need any hacks to create a required shape, utilizes CSS transitions to create animations and fits all screen dpis out of the box. So, I dusted off my SVG knowledge and started coding.

First prototype was ready in couple of hours and it looked like this: 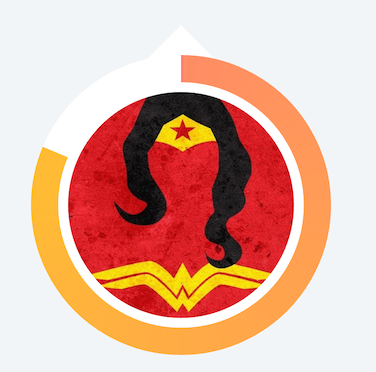 Happy with the result, I sprinkled it with some CSS magic and made a short video showing it in action. 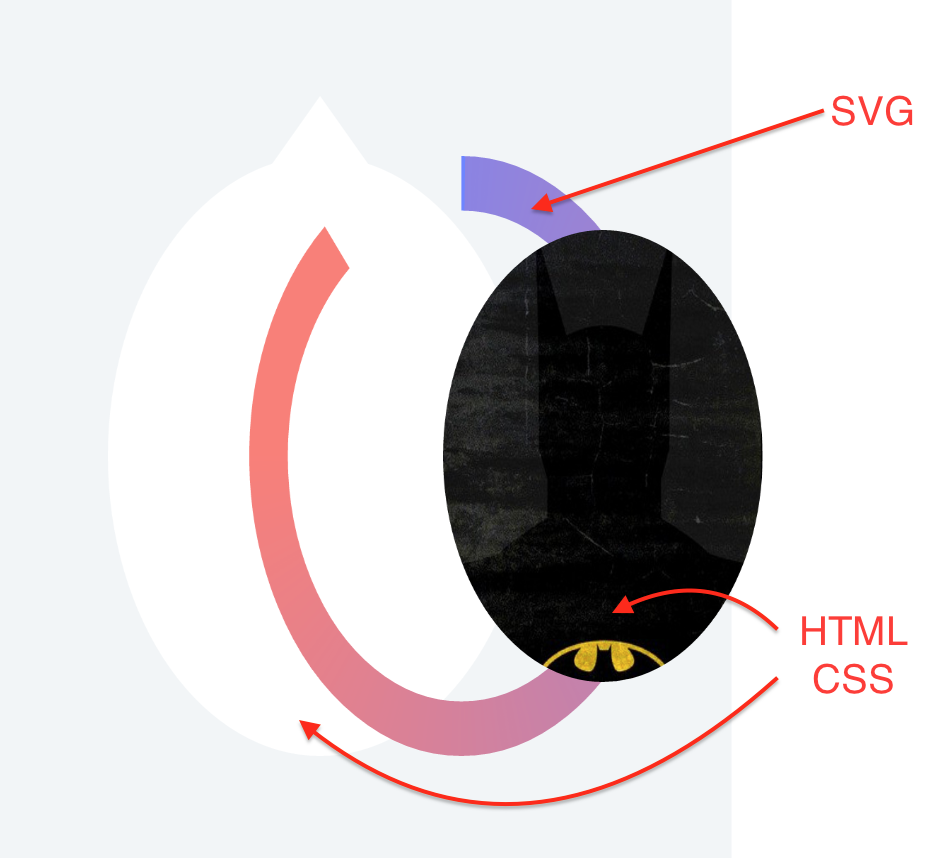 On my way home from work I realized that I haven't yet looked at the performance of that component. I also remembered that during last Chrome Dev Summit someone mentioned that Chromes SVG implementation is dated and not especially performant. That made me fear for the worst. On the next day, I opened the prototype on my HTC One and, sure enough, saw a choppy animation. I debugged it remotely and got this timeline:

(For these unfamiliar with DevTools Timeline - red marks point out lost frames and the FPS graph should, ideally, be all green and flat.)

And so I started looking for optimizations.

Progress bar is using conic gradient in the background. Since this type of gradient is not supported natively in SVG (nor CSS), I had to generate it myself (with SVG and JS). My solution turned out to be suboptimal. Using paint profiler I found out that gradient is regenerated in each frame (which is a lot of unnecessary work):

My fix was to generate each background once and use animated SVG mask to reveal it.

This time I used Lea Verou's conic gradient polyfill to generate PNGs for me.

That helped a bit, but animation was still far from smooth (in fact, it was so far from smooth that android dev who walked by my desk haven't missed a chance to mock it). I decided to discuss it with my colleague who showed me how to get rid of masking (that we assumed was expensive).

Instead of masking, he suggested putting gradient background on the element behind the progress bar. This required me to modify the SVG animation, but made the whole solution much simpler (compare image below with the similar image from the "prototype" section). 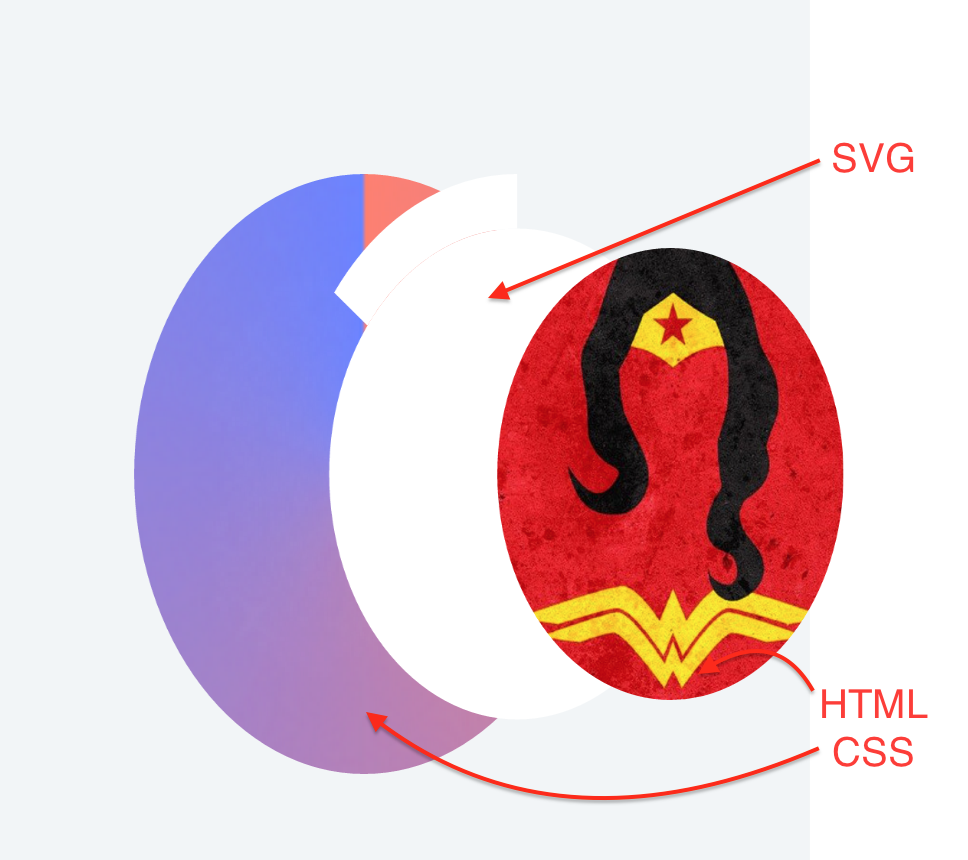 In the process I also learned that setting base64 background directly on the element using el.style.backgroundImage has poor performance (possibly due to parsing) so, instead, I generated CSS classes for each gradient on the fly.

Additionally, to reduce the time browser spends on painting, we forced it (via translateZ/will-change) to promote avatar and SVG to separate layers.

After all these optimizations (and numerous hours) the result was still rather disappointing: 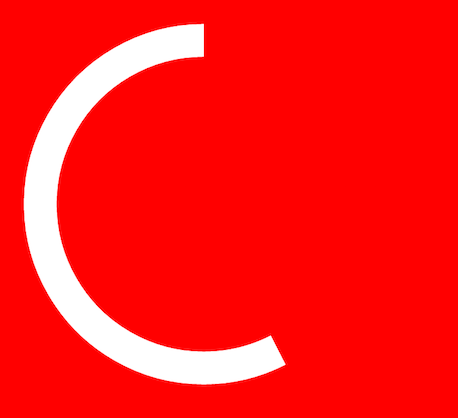 And that's a timeline of this, absolutely minimal, animation on my Android device:

I quickly rebuilt the whole thing using canvas. There is much more JS magic going on, but rasterization is no longer an issue and animation feels waaay smoother. It still isn't perfect, compositing steals a frame once in a while, but I'm much closer to the final version.

I love SVG. It's elegant, scalable and works everywhere. It's perfect for mobile... as long as it doesn't move. There is no way to animate it smoothly on Android - rasterization won't give you a chance: 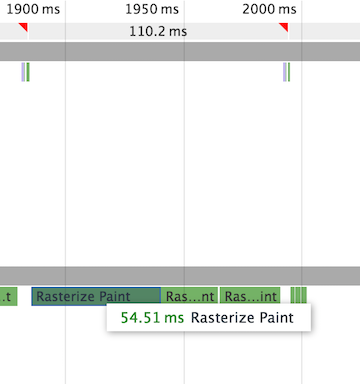 So, why on the desktop even the unoptimized version of my animation, the prototype, works smoothly? That's simply because there are multiple rasterization threads that can handle the load: 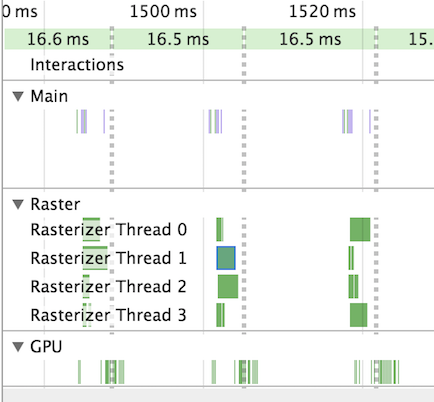 During last Chrome Dev Summit, Chrome team promised to step up their SVG game. I really hope that this will happen soon. In my opinion, SVG is a natural fit for creating complex animations on the web.

Meanwhile, I'll probably go with the canvas solution. It puts much more work on JS, but has a decent performance, is universally supported and, with a bit of work, I can make it look sharp on all dpis.

Paul Irish did a very insightful performance review of the SVG version of my animation. Unfortunately, he haven't found any significant improvements.

I made a safari & edge friendly version of the "reverse" branch (see reverse-es5), added FPSMeter and tested it side by side on Nexus 5X, iPhone5S, Lumia 735. Here is the result: 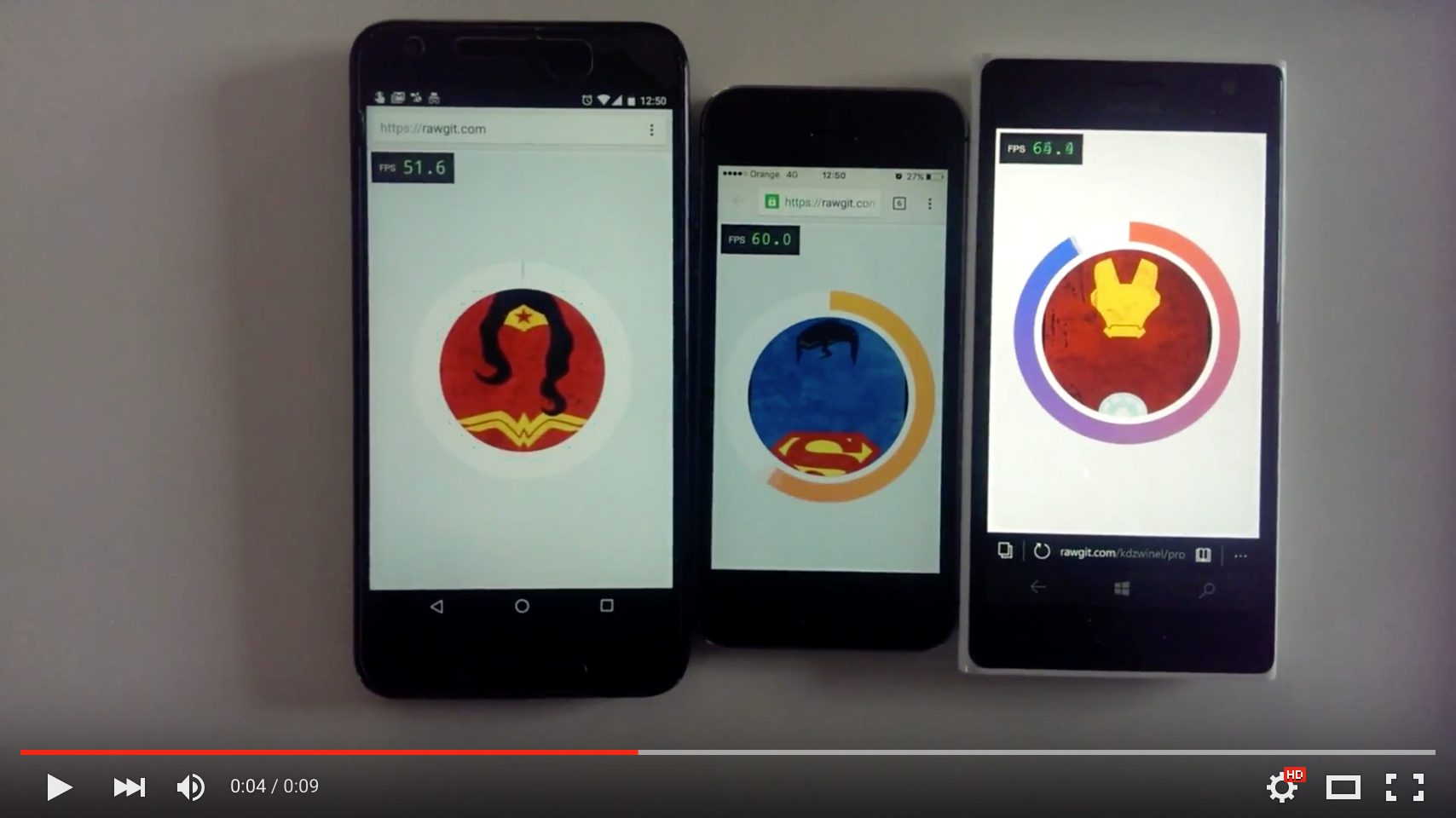 It's hard to tell if this test is fair since these phones have completely different specs. On the other hand, these are all modern devices and run lastest versions of the browsers, so I'd expect all of them to show this animation at the smooth 60FPS.

Before making a final decision I decided to also test the CSS version of the animation (see css branch). As I thought, it turned out to be one big hack that's hard to work with. Also, since the implementation uses two separate elements that have to be synced, making non-linear easing would be challenging. Taking these issues into consideration, despite the fact that it was the most performant solution out of the three I tested, I made the decision to stick with canvas.

Based on the above research I created a simple library wrapping my canvas implementation: https://brainly.github.io/ui-components/components/doughnut-progress-bar/ . We ended up using it on production to create this little widget: