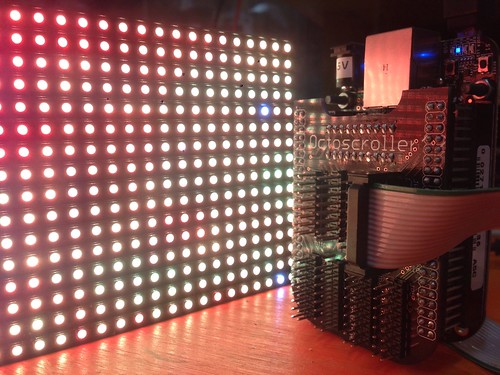 This code works with the PRU units on the Beagle Bone and can easily cause hard crashes. It is still being debugged and developed. Be careful hot-plugging things into the headers -- it is possible to damage the pin drivers and cause problems in the ARM, especially if there are +5V signals involved.

The WS281x LED chips are built like shift registers and make for very easy LED strip construction. The signals are duty-cycle modulated, with a 0 measuring 250 ns long and a 1 being 600 ns long, and 1250 ns between bits. Since this doesn't map to normal SPI hardware and requires an 800 KHz bit clock, it is typically handled with a dedicated microcontroller or DMA hardware on something like the Teensy 3.

However, the TI AM335x ARM Cortex-A8 in the BeagleBone Black has two programmable "microcontrollers" built into the CPU that can handle realtime tasks and also access the ARM's memory. This allows things that might have been delegated to external devices to be handled without any additional hardware, and without the overhead of clocking data out the USB port.

The frames are stored in memory as a series of 4-byte pixels in the order GRBA, packed in strip-major order. This means that it looks like this in RAM:

<ledscape.h> defines the API. The sample rgb-test program pulses the first three LEDs in red, green and blue. The key components are:

The 24-bit RGB data to be displayed is laid out with BRGA format, since that is how it will be translated during the clock out from the PRU. The frame buffer is stored as a "strip-major" array of pixels.

If you want to poke at the PRU directly, there is a command structure shared in PRU DRAM that holds a pointer to the current frame buffer, the length in pixels, a command byte and a response byte. Once the PRU has cleared the command byte you are free to re-write the dma address or number of pixels. 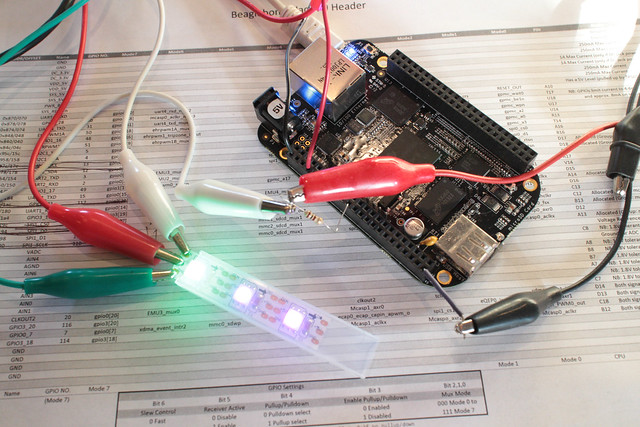