Create beautiful, semantically enriched articles with pandoc. This package provides utilities to make publishing of scientific articles as simple and pleasant as possible. It simplifies setting authors' metadata in YAML blocks, allows to add semantic annotation to citations, and only requires the programs pandoc and make.

Plain pandoc is already excellent at document conversion, but it lacks in metadata handling. Pandoc scholar offers simple ways to include metadata on authors, affiliations, contact details, and citations. The data is included into the final output as document headers. Additionally all entries can be exported as JSON-LD, a standardized format for the semantic web.

The background leading to the development of pandoc scholar is described in the paper published in PeerJ Computer Science.

Note that since version 2.0, most of the functionality of pandoc Scholar is now provided via pandoc Lua filters. If you prefer to mix-and-match selected functionalities provided by pandoc scholar, you can now use the respective Lua filters directly. Integration with tools like RMarkdown is possible this way.

An example document plus bibliography is provided in the example folder. Running make in the project's root folder will process the example article, generating output like below: 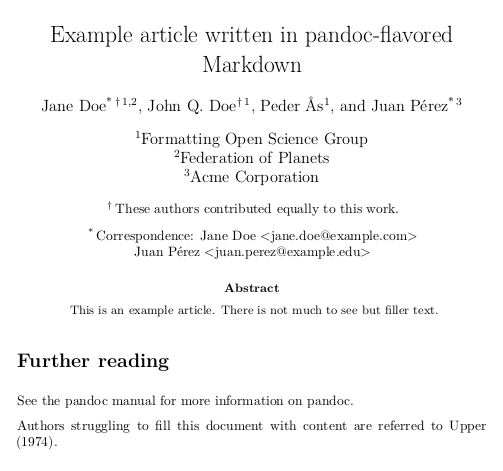 Get the full output as pdf, docx, or epub, or take a look at the metadata in JSON-LD format.

This package builds on pandoc, the universal document converter, version 2.1 or later. See the pandoc website for installation instructions and suggestions for LaTeX packages, which we use for PDF generation.

Archives containing all required files are provided for each release. Use the release button above (or directly go to the latest release) and download a pandoc-scholar archive; both archive files, .zip and .tar.gz, contain the same files. Choose the filetype that is the easiest to unpack on you system.

A pandoc-scholar folder will be created on unpacking. The folder contains all required scripts and templates.

Run make to convert the example article into all supported output formats. The markdown file used to create the output files can be configured via the ARTICLE_FILE variable, either directly in the Makefile or by specifying the value on the command line.

The Makefile, which does most of the work, is written in a style that makes it simple to include it from within other Makefiles. This method allows to keep pandoc-scholar installed in a central location and to use the same instance for multiple projects. The ARTICLE_FILE and PANDOC_SCHOLAR_PATH variables must be defined in the including Makefile:

Calling make as usual will create all configured output formats. Per default, this creates pdf, latex, docx, odt, epub, html, and jats output. The set of output files can be reduced by setting the DEFAULT_EXTENSIONS variable to a subset of the aforementioned formats.

Alternative template files can be set using TEMPLATE_FILE_<FORMAT> variables, where <FORMAT> is one of HTML, EPUB, JATS, or LATEX. The reference files for ODT and DOCX output can be changed using ODT_REFERENCE_FILE and DOCX_REFERENCE_FILE, respectively.

Additional pandoc options can be given on a per-format basis using PANDOC_<FORMAT>_OPTIONS variables. The following uses an actual Makefile as an example to demonstrate usage of those options.

Pandoc scholar supports additional functionality via metadata fields. Most notably, the augmentation of articles with author and affiliation data, which is essential for academic publishing, is greatly simplified when using pandoc scholar.

Most metadata should be specified in the YAML block at the top of the article. Author data and affiliations are taken from the author and institute field, respectively. Institutes can be given via user-defined abbreviations, saving unnecessary repetitions while preserving readability.

Authors are given in the order in which they are listed, while institute order follows from author order.

The separate institute field may add unwanted complexity in some cases. It is hence possible to omit it and to give the affiliations name directly in the author entry:

Often it is not enough to give just a name for institutes. It is hence possible to add arbitrary fields. The name must then explicitly be set via the name field of the institute entry:

Currently only the institute's address is used in the default template, but future extensions will be based on this convention.

Understanding the reason a citations is included in scholarly articles usually requires natural language processing of the article. However, navigating the current literature landscape can be improved and by having that information accesible and in a machine-readable form. Pandoc scholar supports the CiTO ontology, allowing authors to specify important meta-information on the citation directly while writing the text. The property is simply prepended to the citation key, separated by a colon: @<property>:citationKey.

The following table contains all supported keywords and the respective CiTO properties. Authors are free to use the short-form, the full-length property, or any of the alternatives listed below (i.e., all word in a row denote the property and have the same effect).

Copyright © 2016–2020 Albert Krewinkel and Robert Winkler except for the following components:

You should have received a copy of the GNU General Public License along with this program; if not, write to the Free Software Foundation, Inc., 51 Franklin Street, Fifth Floor, Boston, MA 02110-1301 USA.