Sign up
A nice R development environment, similar to R Studio, for the Renjin JVM implementation of R
Find file

The purpose of this gui is to provide a nice R development environment, similar to R Studio, for the Renjin JVM implementation of R (www.renjin.org). It runs R code in the renjin ScriptEngine thus allowing you to run and verify R scripts before creating an embedded R application in java code, or to just use it as a data analysis tool much like you would use R Studio.

It was created to have a familiar (similar to RStudio) interface to develop R scripts that will later run in embedded mode on application servers such as Wildfly or Play Framework. I use it daily at work and have been doing so for several months now. It started as a tool to develop and test R code that I created using RStudio but needed a manageable intermediary to make sure my code worked in Renjin before integrating it with the java application servers I use at work - due to fact that many packages commonly used in GNU R does not yet work in Renjin. Later, it evolved to the point where I now use it as my primary data analysis tool.

It is fully functional i.e. it is possible to create, open, save and execute R scripts, run selected text, ctrl + enter execution of current line or selected text, view packages loaded, see variables created, syntax highlighting for R, XML, SQL and Java files etc. but it has some way to go compared to all the rich functionality of RStudio at this point. 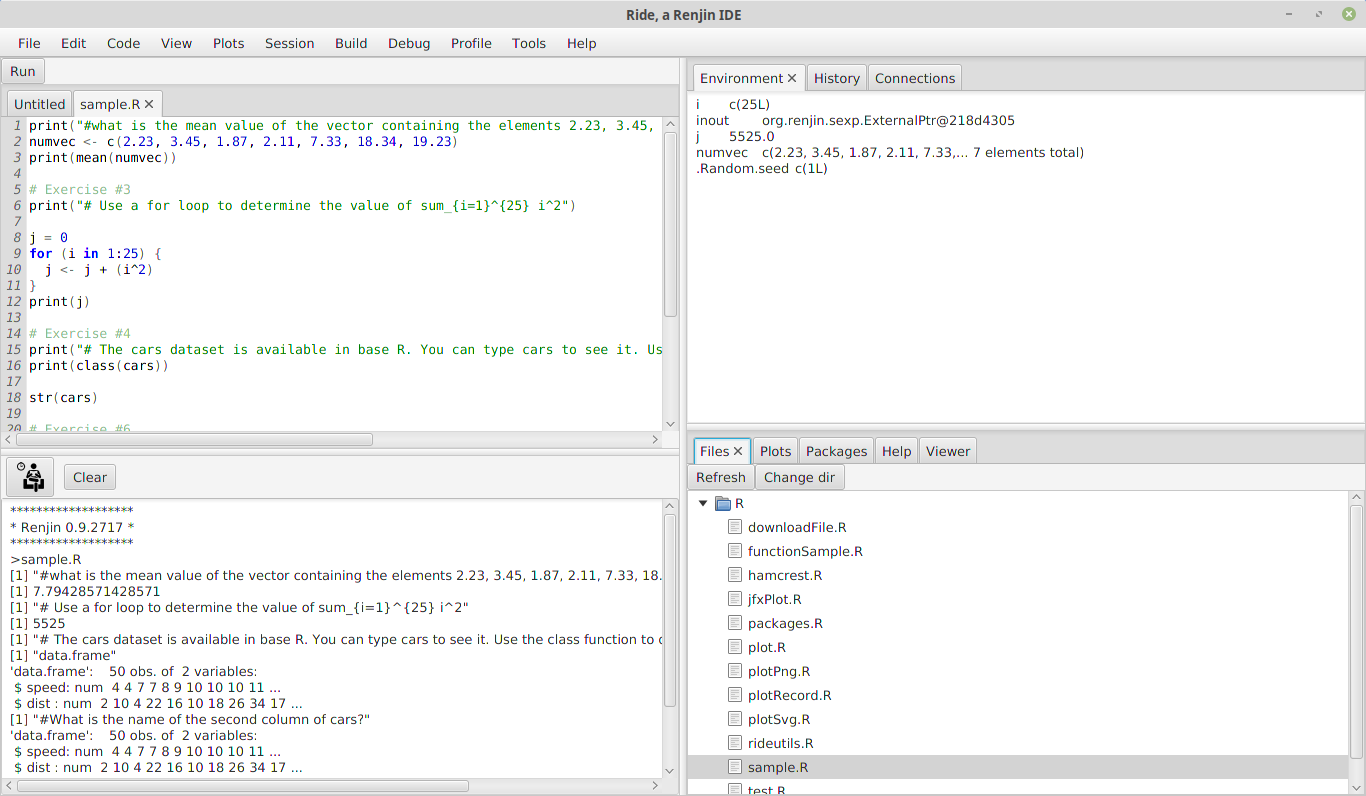 As Renjins support for graphics such as plotting is still somewhat limited (It just pops up an AWT window with the plot). An alternative way is to use the inout component that has been injected into the session to display files e.g. 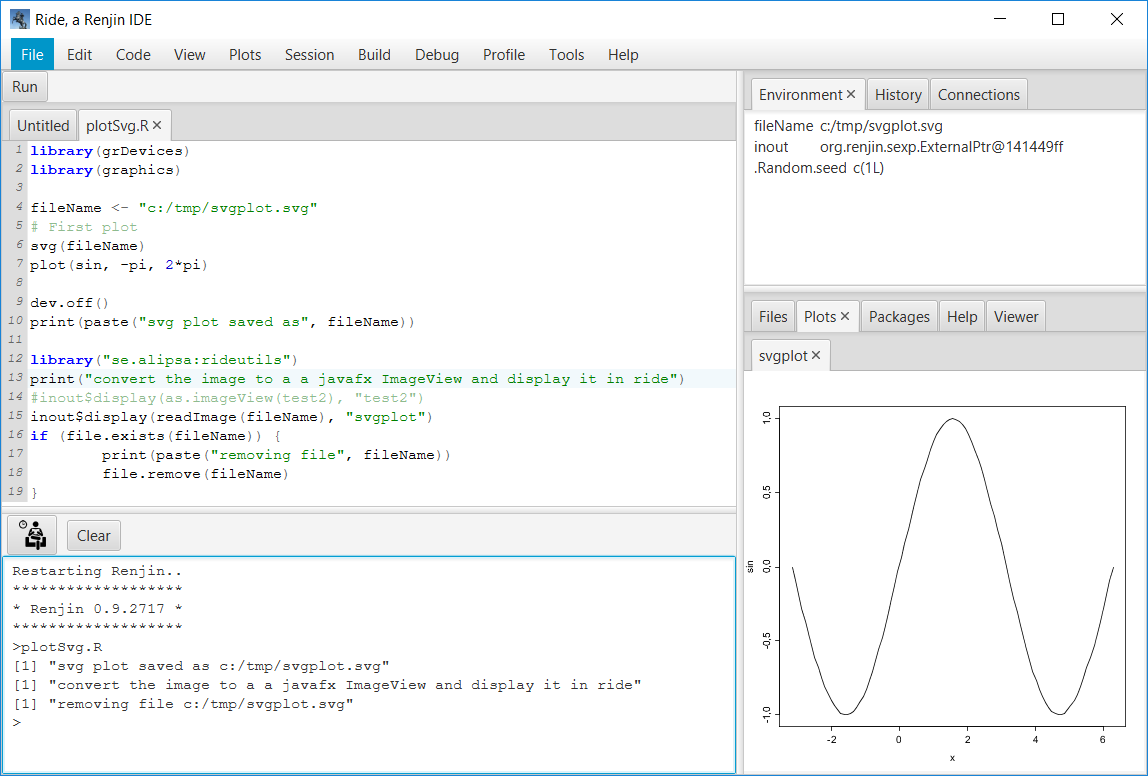 The AetherPackageLoader is used per default so libraries will be fetched automatically from bedatadriven or maven central repos. This can be modified in the Global Options menu.

If you change to the ClasspathPackageLoader you need to add dependencies to the maven pom.xml when running Ride. The change is persistent so just add any required dependency and start Ride.

This is useful when moving from development to test to make sure dependencies are correct prior to integration testing in embedded mode on e.g. an app server. In the Packages tab you can see a list of packages loaded for the session (in case you missed a library call in the script but loaded it from another script - the session is shared).

There are icons for windows and Linux in the base folder of the unpacked zip that can be used to create a desktop shortcut/launcher.

This uses maven as the means to download resources and start Ride. All external dependencies are described in the pom.xml file. When preparing for your R code to be intergrated into your application it is quite useful to use the ClasspathPackageLoader and modify the pom.xml to include your dependencies and then verify that your code runs as expected. If it does you can be sure it will work in your application as well once you have added those same dependecies. Use ride.cmd or ride.sh to start ride.

This uses ant to start Ride. It contains all the artifacts needed to run Ride. Anything that is in the lib folder will be added to the classpath. To add a new artefact just put it in the lib dir and restart ride. This is useful if you are working off the grid or manage your artefacts in some other way that makes them unavailable from a maven remote repository. Note that you can combine Ride off line with AetherPackageLoader to still dynamically download packages as needed. Use ride-offline.cmd or ride-offline.sh to start ride.

Showing the result of a select query in the viewer tab and the connection view that is shown when you right click a connection and choose "view connection". 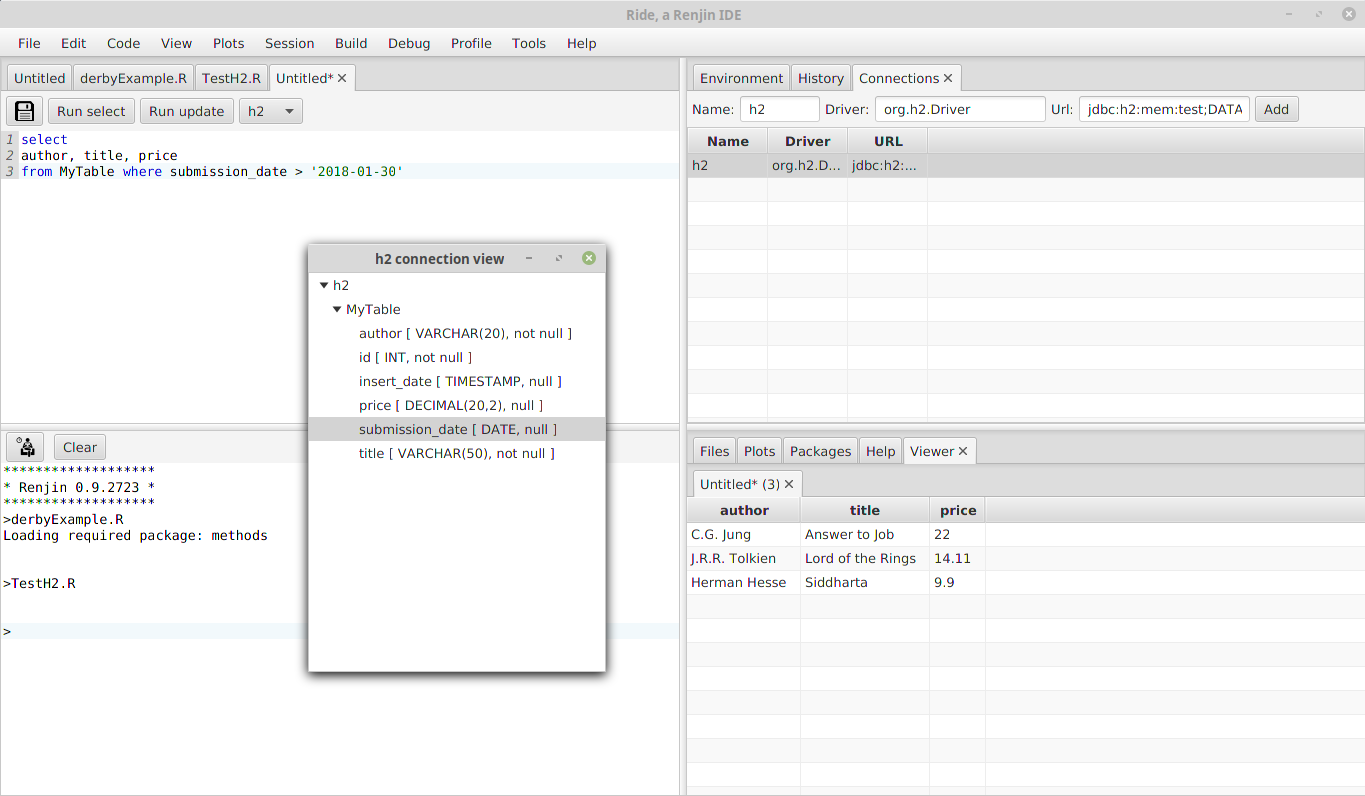 There are some wrapper scripts that you might find useful.
To create a runnable jar and run it do

or the equivalent devrun.cmd for windows.

To just run it without rebuilding use run.sh or run.cmd depending on environment.

For released versions there is another shell script (ride.sh or ride.cmd) that should be used to start Ride.

Note: only direct dependencies are listed below.

The components that actually does something ;) i.e. executes R code. It is not included in the fat jar and dependecies are scoped as provided. This enables us to run Ride with any version of Renjin (0.9.2716 or later)

These are included for convenience only. Licenced under various open source licenses. There is no direct dependency on any jdbc driver in Ride.

If you are interested in helping out, reporting issues, creating tests or implementing new features are all warmly welcome. See also todo for roadmap.