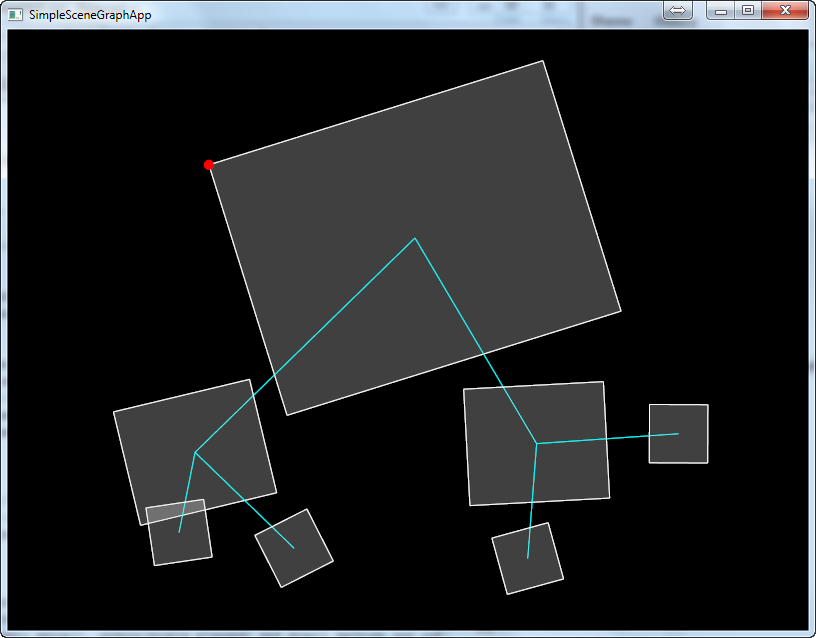 This sample will show you how to:

I tried to live without a scene graph and it gave me severe headaches and suicidal tendencies. That's why at one point in my project I decided to throw much of what I had done out of the window and create my own scene graph.

First, I looked at OpenScenegraph, to see if I could use it with Cinder. Unfortunately (for us), it wants to take control of much of the render pipeline, so it isn't easy (if even possible) to let OSG and Cinder live next to each other. I did, however, borrow some ideas from their implementation. But for the most part, my implementation is radically different. For instance, OSG uses special transform nodes, that sit between objects. I chose to incorporate transforms into the nodes themselves. While OSG's system is more flexible and optimized, mine is a lot easier to setup and use from code.

Another alternative scene graph would be FBX, which I will probably start using instead of my own scene graph as soon as I have learned more about it. It supports animation and skinning, among other things, and is backed by great 3D modelling packages. It will allow you to work together with a modeler and animator, instead of having to hard-code all your animations.

As I said, my scene graph doesn't come with documentation, but here are a few tips:

Although my scene graph is far from perfect, in practice it does its job and helps me keep my sanity :)

Copyright (c) 2012, Paul Houx - All rights reserved. This code is intended for use with the Cinder C++ library: http://libcinder.org