A sublime plugin for the typescript language - WIP

UPDATE : A new project, T3S, has risen, and does all this project does apparently, and more, so give it a try !

THIS PLUGIN IS NOT MAINTAINED ANYMORE, AND WILL NOT BE. IF YOU NEED IMPROVEMENTS/BUG FIXES YOU WILL HAVE TO DO THEM YOURSELF. IF YOU WANT TO TAKE OWNERSHIP OF THE PROJECT, JUST TELL ME AND I WILL BE HAPPY TO GIVE IT TO YOU.

A Sublime Text plugin for the Typescript language

You need to have node.js installed before anything.

Clone the repository in your sublime "Packages" directory. You also need to ensure that the node executable is on your path, or that the "node_path" key is set somewhere in a typescript.sublime-settings settings file that sublime text can reach.

After that you're set and you can use the plugin ! First run might take long to set up, and it will need an internet connection, because the plugin is actually :

After that you can use the plugin offline. If you don't have an internet connection, getting typescript sources and putting them in the lib/typescript directory will work too.

For the moment the functionnality is very basic : 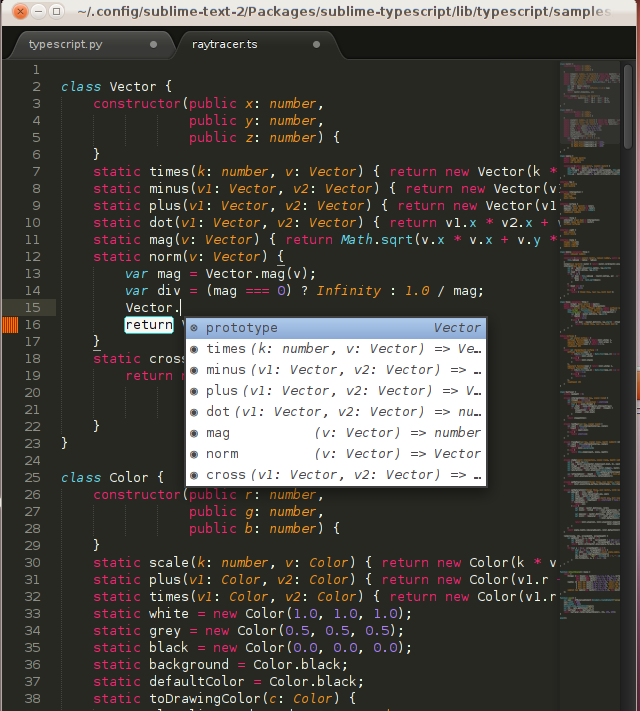 By default, a new instance of the plugin server is created for every file. The TypeScript language service has an odd behaviour, as in, every file you add to the service will be considered to be in the same compilation unit as the others. If you want to specify to the plugin that some files are part of the same project, put a .sublimets file in the folder. If you don't do that, every file will be opened in a separate plugin instance

A sublime plugin for the typescript language - WIP