Generate flow coverage reports in JSON, HTML and in the console.

flow-coverage-report is a node command line tool to help projects which are using flow types in their JavaScript code to keep track and visualize the coverage of the flow types checks. 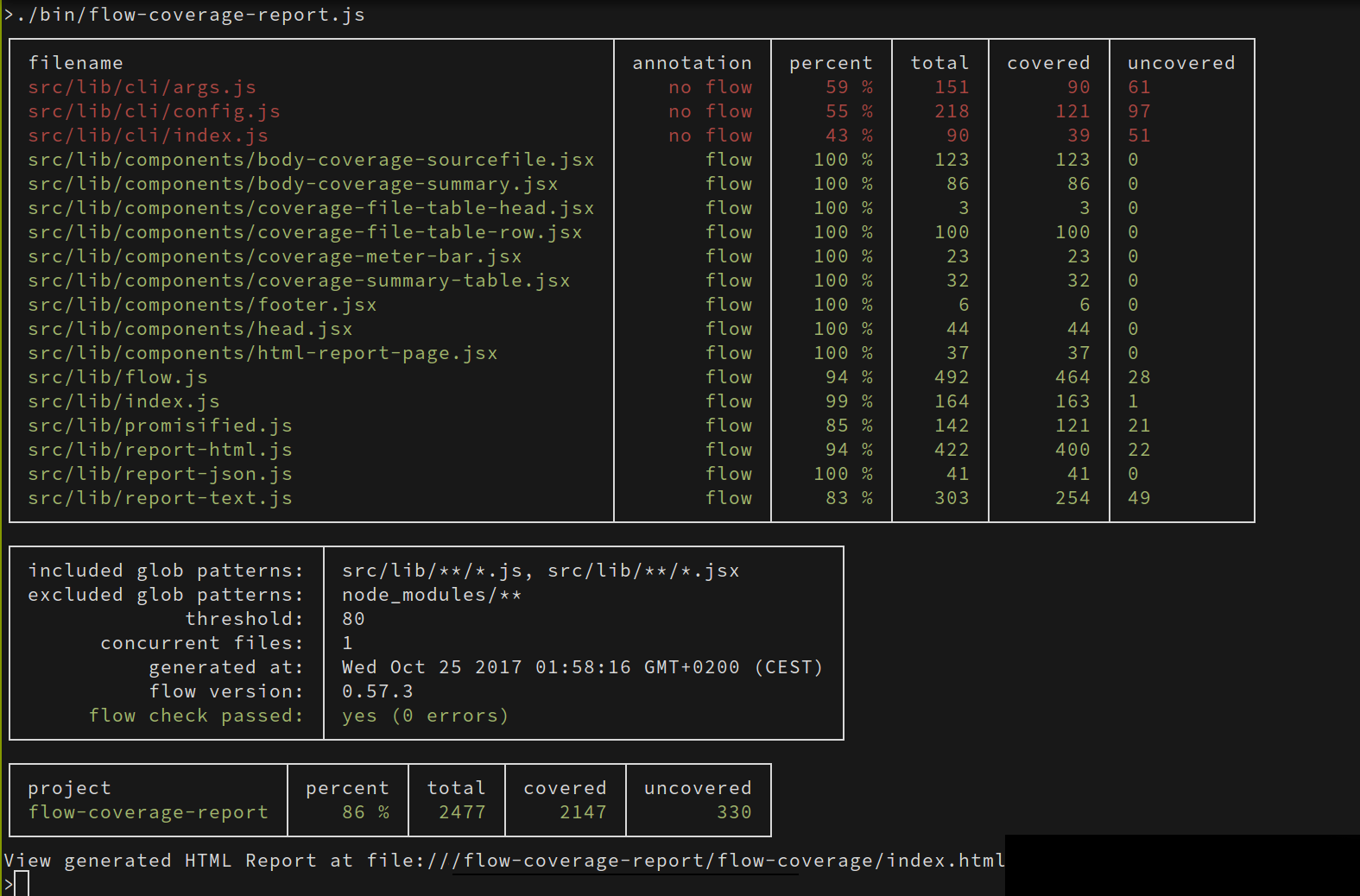 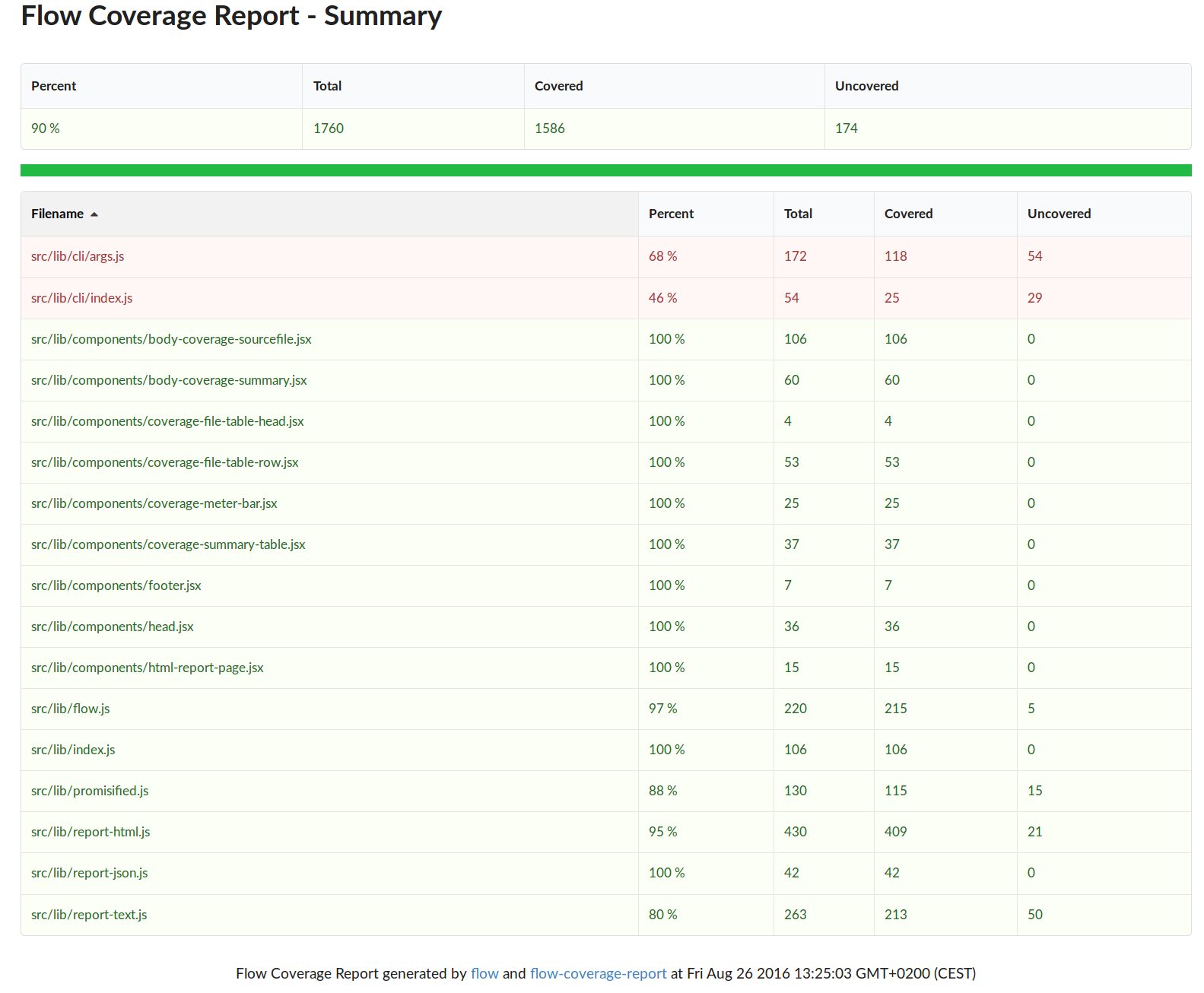 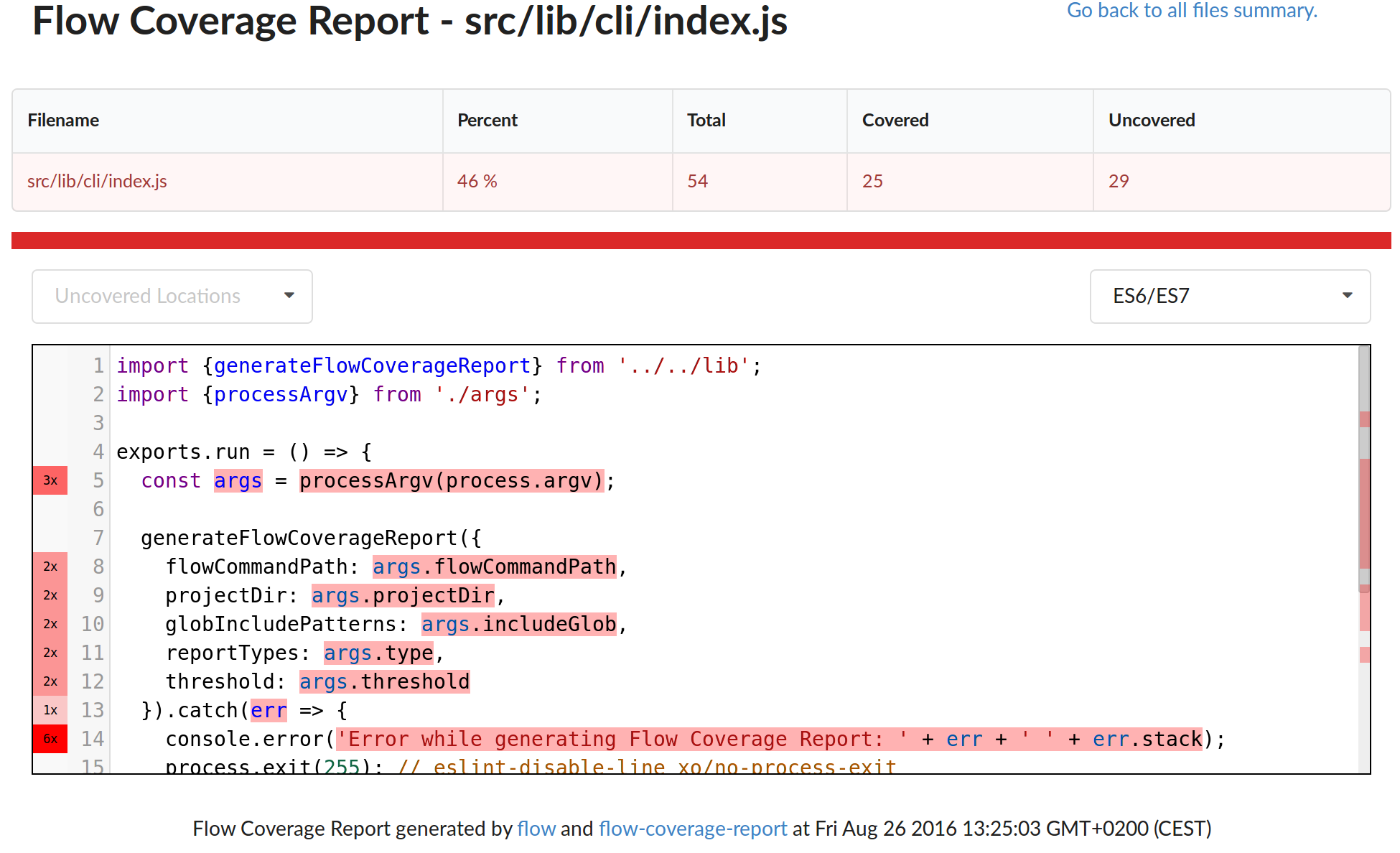 How to generate flow coverage reports for your project

Run the flow reporter (-i configures the include globs, -x the exclude patterns, --threshold to configure a minimum coverage below which the build should fail, which defaults to 80%, and -t the report types enabled):

If the flow executable is not in your PATH, you can specified it using the -f option:

To customize the output dir (which defaults to flow-coverage/). you can use the -o option:

The --config flag allows specifying a path to a config file. The config file is a JSON file with the following structure:

For an npm package, the default options can also be configured by including them in a "flow-coverage-report" package.json property property:

As a gradual typing system for JavaScript, flow will help you to statically checks parts of your JavaScript code by:

Unfortunately, even with a good amount of powerful inferencing strategies, sometimes flow is not able to inference the types in some chunks of our code.

That's usually the source of a "Meh!" moment, and we blame flow for not being able to catch some issue that we thought it would catch statically.

Fortunately, flow has a coverage command which can give us a quantitative info of the flow types coverage, and optionally a color-based visualization of the parts of the source file that are not covered, for a single file.

How to generate this quantitative info and this very useful visualization of the uncoverage parts of our sources for our entire project?

Thanks to Ville Saukkonen and Ben Styles for contributing the new --exclude-non-flow and --percent-deciments options, and Xandor Schiefer for adding support to the new flow annotations.

Thanks to Ryan Albrecht and Karolis Grinkevičius for their help on this bugfix release.

Thanks to Ryan Albrecht, Boris Egorov, Julien Wajsberg for their help on this new release.

In this version, the flow-coverage-report npm package is also switching to a MIT license.

Thanks to Ryan Albrecht, Jason Laster, Guillaume Claret and Steven Luscher for their help on this new release.

Thanks to Ilia Saulenko, Ryan Albrecht and Jason Laster for their help on this new release.

Thanks to Kumar McMillan and Andy MacKay for their advice and support, this project and its github repo wouldn't exist without you.

Generate flow coverage reports in JSON, HTML and in the console.