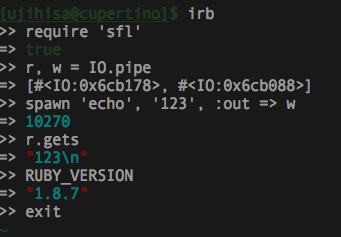 Kernel.spawn in ruby 1.9 solves all issues on asynchronous executions[1][2]. But ruby 1.8, the legacy version of MRI, is still used on many environments.

This library provides spawn() which is almost perfectly compatible with ruby 1.9's. This library is pure ruby; you don't need to build it.

How compatible this spawn is?

Currently there are no supports on: