Image Reconstruction from an Event Camera

This repository contains code for brightness image reconstruction from a rotating event camera. For simplicity, we assume that the orientation of the camera is given, e.g., it is provided by a pose-tracking algorithm or by ground truth camera poses. The algorithm uses a per-pixel Extended Kalman Filter (EKF) approach to estimate the brightness image or gradient map that caused the events.

This code has been tested with MATLAB R2017a on Ubuntu 16.04. This is research code, expect that it changes often and any fitness for a particular purpose is disclaimed. The source code is released under a GNU General Public License (GPL).

This script reads a file of events and a file of camera rotations and produces a panoramic image with the reconstructed brightness that caused the events. See the example provided.

When running the script, a figure will emerge showing the evolution of the reconstructed brightness map as events are being processed: 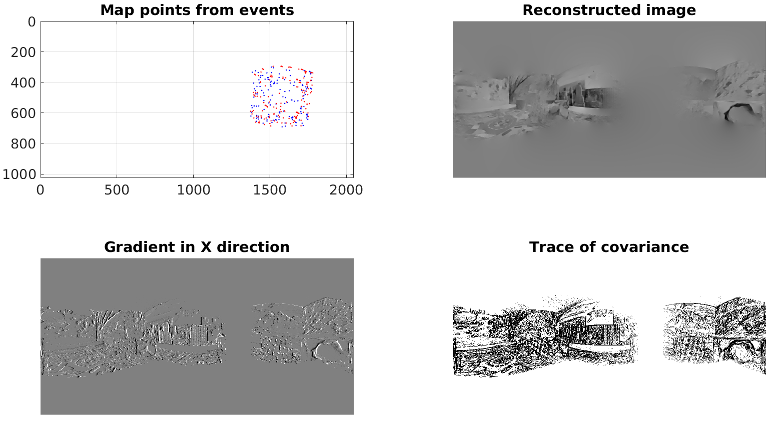 The reconstructed brightness image obtained after processing all events is the following: The above reconstructed map is displayed in logarithmic scale since the event camera known as Dynamic Vision Sensor (DVS) operates on logarithmic brightness.

Some details on the EKF approach

A sample of the output produced by the algorithm can be found in this folder.

If you use this code in an academic context, please cite the following references: