A data visualization to observe the state of LIGO machines 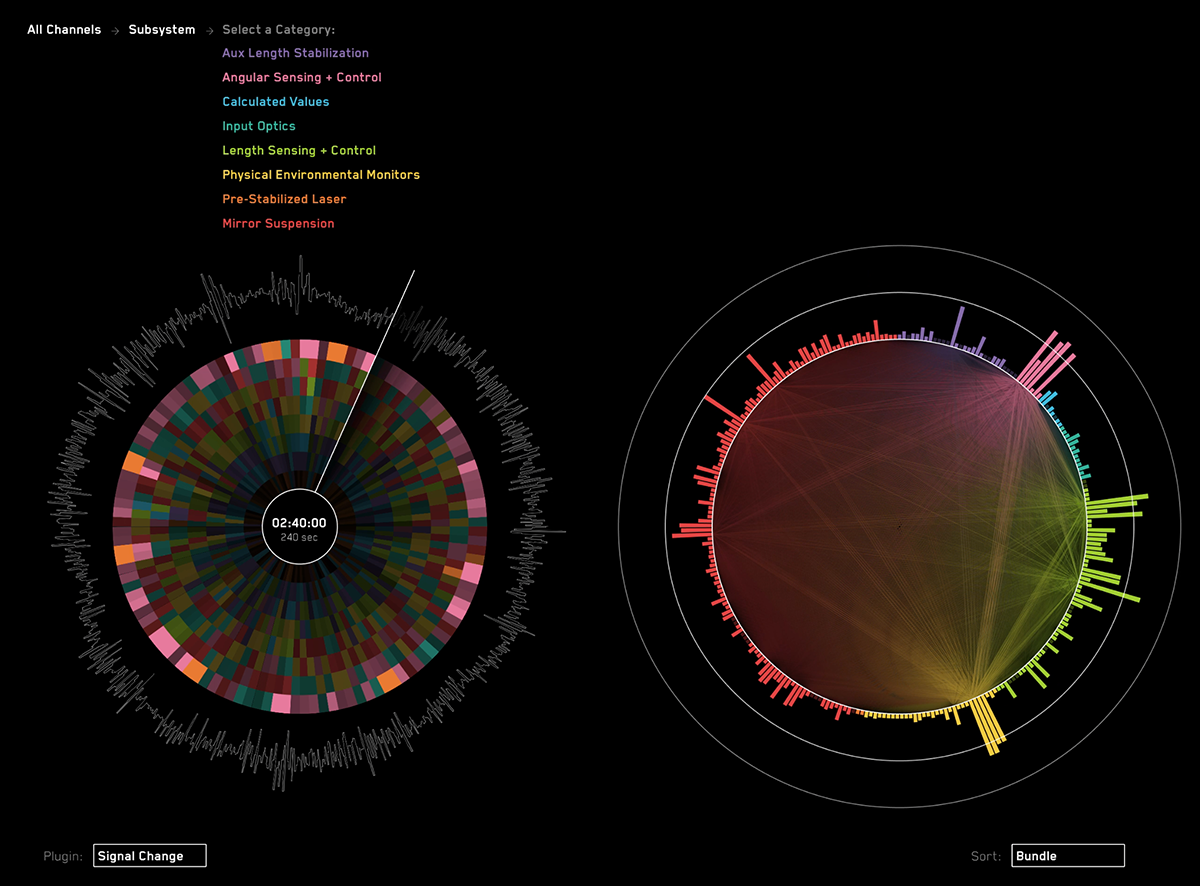 The Interferometer Watch application is a data visualization which displays the state of a laser interferometer (LIGO) machine. It was originally designed in the Summer of 2014 for the Data To Discovery: Summer of Visualization program at NASA's Jet Propulsion Lab and Caltech.

This application was created by Luna Lie, Stephen Bader and William Lindmeier in conjuction with Dr. Rana Adhikari, Eric Quintero, Kari Hodge, and Nick Smith from the Caltech physics department.

The application can read historical data from Frame Library formatted files. A sample dataset can be found here:
http://www.ligo.caltech.edu/~rana/ExampleData/. See the "Configuration" instructions below to use a dataset.

The Interferometer Watch app was developed on a Mac to run on a Mac, but in might work on a Windows machine with only slight modifications. Linux is not currently supported.

The primary app codebase is can be found in InterferometerWatch/

Some additional (required) files are found in Common/

The CommonData/ folder contains some sample channel bundling files, as well as a very small dataset. Take a look at the "Configuration" instructions to see how those are imported.

The codebase requires the Cinder library. Cinder is a cross-platform framework that handles the OpenGL drawing, as well as many other things like math and library support (e.g. FFT).

This codebase was built using Cinder version 0.8.6dev. Before compiling the software, you have to update the build setting named CINDER_PATH with the path for your Cinder installation.

You can download it and learn more here:
http://libcinder.org/

The app expects a file named "ligo_vis_config.csv" to live in the same directory as the app itself. This should be automatically copied in place when the app is built by XCode. This file is a simple key-value-pair CSV file with the following params (and sample values):

Some of the params are contingent upon other values. For example, if use_live_data is 0, the server name and port won't be used.

Here are some brief explanations of the params:

As of this writing, I've only been able to connect to the nds40 server. However, because of the network speeds, the app caps out at around 60 channels. Otherwise it can't keep up in real-time because the data isn't coming in fast enough. In theory, if we're connected to a fast network server, this shouldn't be an issue.

The app opens 8 connections to the network server and each connection requests a subset of the channels in timed loops. Take a look at the LiveDataConnection and NDSDataStreamer classes for a more detailed look at how that's happening.

The app was designed with extendability in mind. The interface calls them "Plugins" and the codebase may refer to them as "Filters". Basically, they analyze the incoming data and tell the front-end how to represent that data visually. Filters are passed timestamped channel data on their own thread in the processing pipeline, and are expected to create some kind of output for the data it's passed (e.g. FFT values). Those outputs will be stored for later. When the app is rendering, it will pass the filter these outputs (on the main thread) and ask for visual clues. For example, "Heres a packet of data. Based on these outputs, how long should the channel bar be?" or "How bright should the timeline bundle be?" The best way to start may be creating a very simple filter that stores fake data and returns sine wave values for the visual clues. That will give you a sense of what it's role in the app is.

###Creating a new Filter: To extend the app with a new filter, you need to add a new C++ class (which is the filter), and struct (which is the output). Look at ChannelFilterDiff or ChannelFilterFFT for an example. The new class must be a subclass of ChannelFilter and implement a number of virtual methods. The struct must be a sub-struct of FilterResults, and that can contain arbitrary data values that are relevant to the filter. However, it should also set the values in the super-struct.

###Adding a new Filter: Once the class has been written, a new line should be added to filtering_manifest.csv with the filter key (which is defined in the class file), a description, and whether it's enabled (1 or 0). You also need to edit DataParser::setupChannelFilters() to append a filter instance to mChannelFilters. See the comments for an example implementation.

All channel names and bundle values are defined in a spreadsheet. Here's an example with the correct format:

Each enabled bundle must have a "Value Keys file", which also a .csv in the ”bundling_files_path”. This is just a lookup table between the bundle values (as defined in the spreadsheet), and a more human-readable name (e.g. LSC == Length Sensing and Control).

The app will only displayed the channels listed in that spreadsheet.

Selecting a time in the Moment View (right circle): Drag the playhead with your mouse.

Selecting an FFT frequency: Drag / click your mouse in the FFT spectrum.

Fine-tuned FFT frequency selection: Up and Down arrow keys.

View a Channel Name: Hover your mouse over a bar in the moment view.

Selecting a Bundle / Category: Click on the bundle name

Going "back" in the navigation: Click on the nav node you want to return to (e.g. "All")

The basic architecture of the app:

The data-processing happens in a multi-threaded pipeline.

The front-end UI queries the dispatcher for data using timestamps. Most of that logic happens in the main app class ( LIGOClockApp ). Specific submodules have their own rendering class. For example the timeline ( TimelineRenderer ), the moment view ( MomentRenderer ) and the bundling nav ( NavigationRenderer ).

More details of how the code works has been added as comments in the classes itself.

A data visualization to observe the state of LIGO machines