All in one small self-contained executable.

Clone algernon outside of GOPATH:

This may also work:

See the release page for releases for a variety of platforms and architectures.

The docker image is a total of 9MB.

Written in Go. Uses Bolt (built-in), MySQL, PostgreSQL or Redis (recommended) for the database backend, permissions2 for handling users and permissions, gopher-lua for interpreting and running Lua, http2 for serving HTTP/2, QUIC for serving over QUIC, blackfriday for Markdown rendering, amber for Amber templates, Pongo2 for Pongo2 templates, Sass(SCSS) and GCSS for CSS preprocessing. logrus is used for logging, goja-babel for converting from JSX to JavaScript, tollbooth for rate limiting, pie for plugins and graceful for graceful shutdowns.

What is the benefit of using this? In what scenario would this excel? Thanks. -- mtw@HN.

I guess the main benefit is that Algernon covers a lot of ground, with a minimum of configuration, while being powerful enough to have a plugin system and support for programming in Lua. There is an auto-refresh feature that uses Server Sent Events, when editing Markdown or web pages. There is also support for the latest in Web technologies, like HTTP/2, QUIC and TLS 1.3. The caching system is decent. And the use of Go ensures that also smaller platforms like NetBSD and systems like Raspberry Pi are covered. There are no external dependencies, so Algernon can run on any system that Go can support.

The main benefit is that is is versatile, fresh, and covers many platforms and use cases.

Any system where go is available

This method is using the latest commit from the master branch: 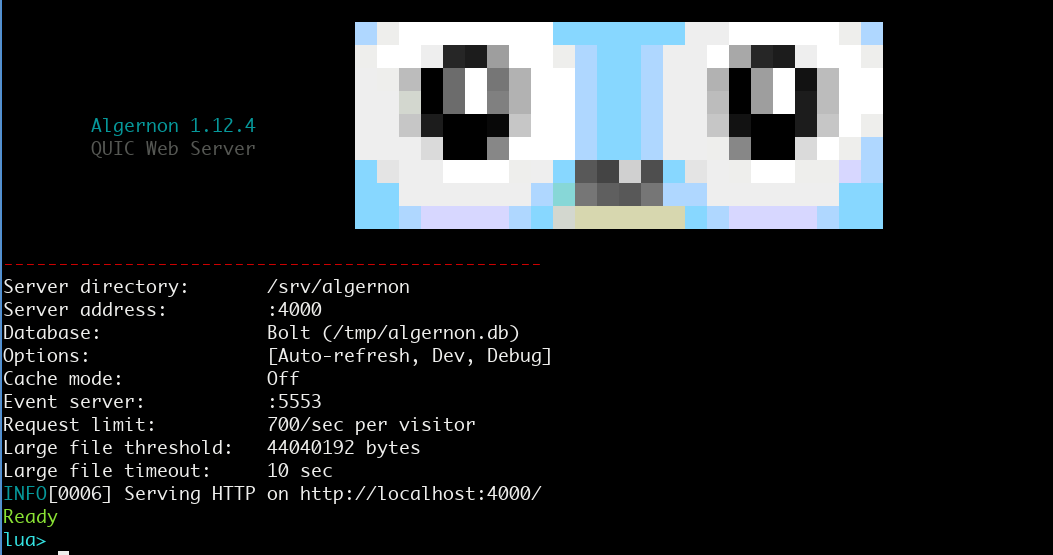 Screenshot of an earlier version: 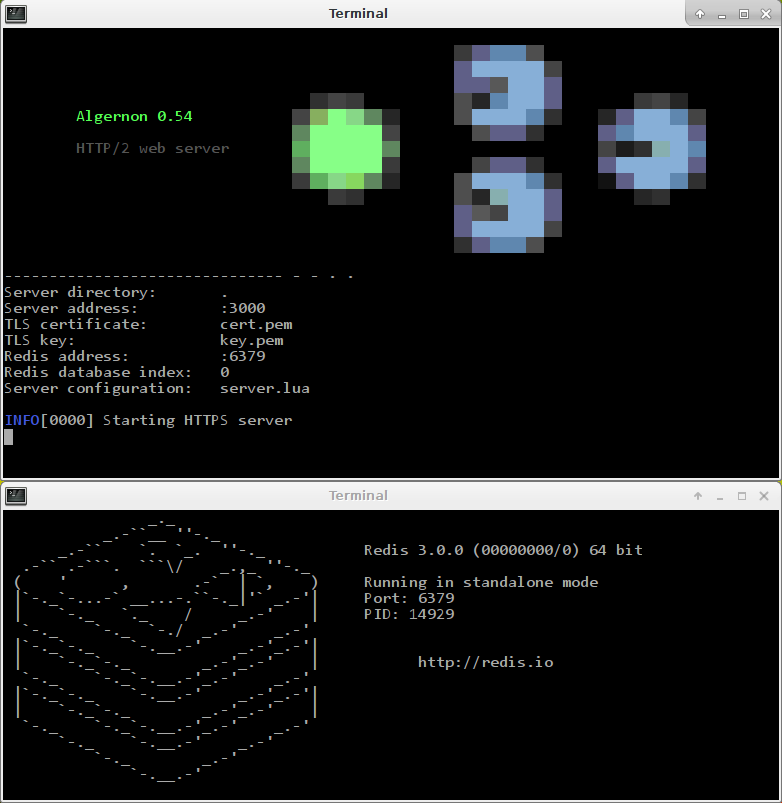 The idea is that web pages can be written in Markdown, Pongo2, Amber, HTML or JSX (+React), depending on the need, and styled with CSS, Sass(SCSS) or GCSS, while data can be provided by a Lua script that talks to Redis, BoltDB, PostgreSQL or MariaDB/MySQL.

Amber and GCSS is a good combination for static pages, that allows for more clarity and less repetition than HTML and CSS. It˙s also easy to use Lua for providing data for the Amber templates, which helps separate model, controller and view.

The auto-refresh feature is supported when using Markdown, Pongo2 or Amber, and is useful to get an instant preview when developing.

The JSX to JavaScript (ECMAscript) transpiler is built-in.

Redis is fast, scalable and offers good data persistence. This should be the preferred backend.

Bolt is a pure key/value store, written in Go. It makes it easy to run Algernon without having to set up a database host first. MariaDB/MySQL support is included because of its widespread availability.

PostgreSQL is a solid and fast database that is also supported. 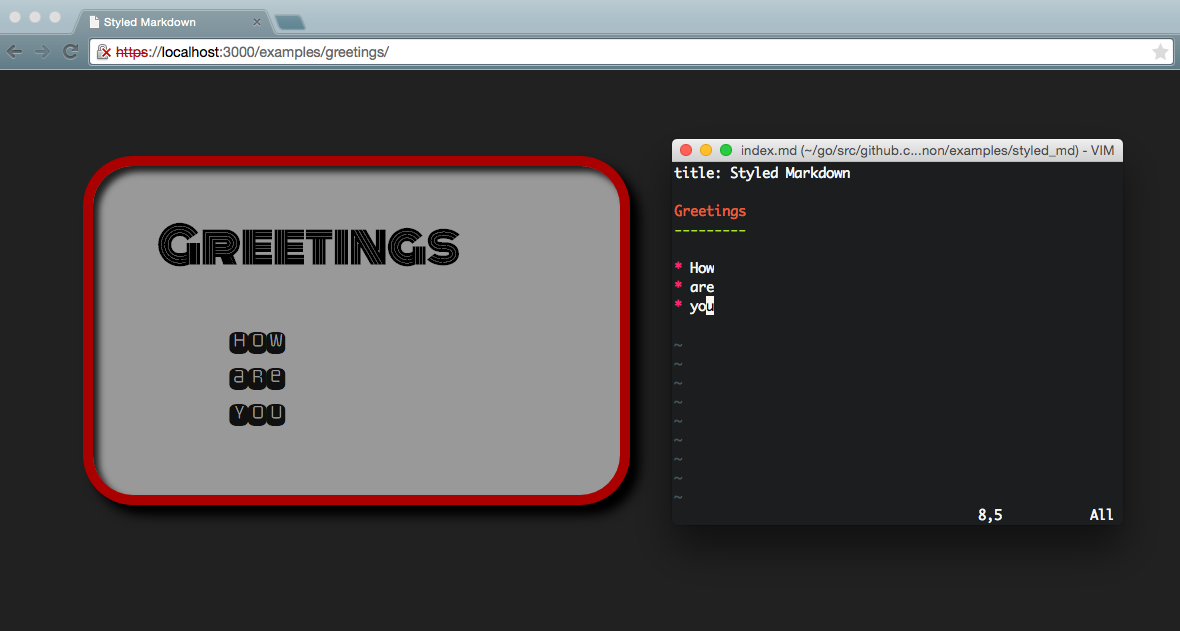 Markdown can easily be styled with Sass or GCSS. 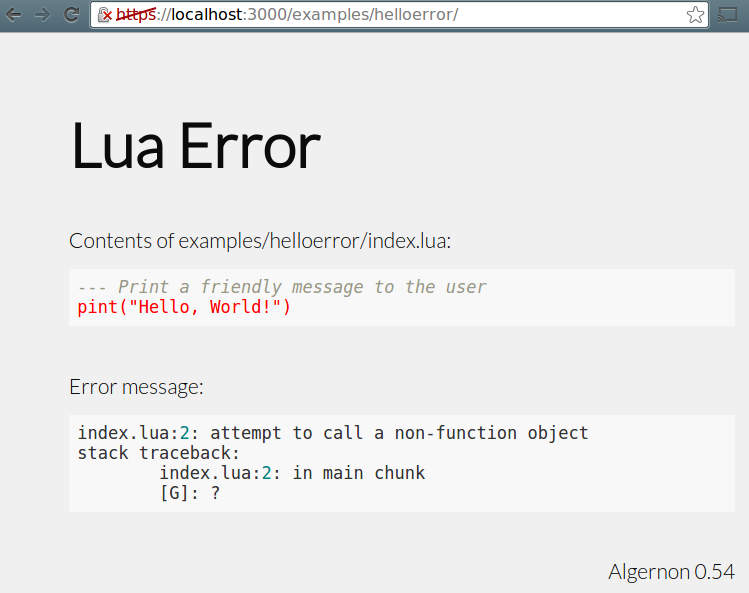 This is how errors in Lua scripts are handled, when Debug mode is enabled. 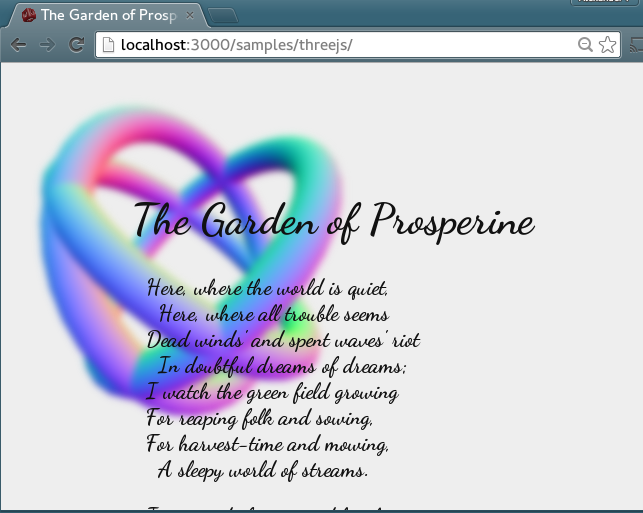 One of the poems of Algernon Charles Swinburne, with three rotating tori in the background. Uses CSS3 for the Gaussian blur and three.js for the 3D graphics. 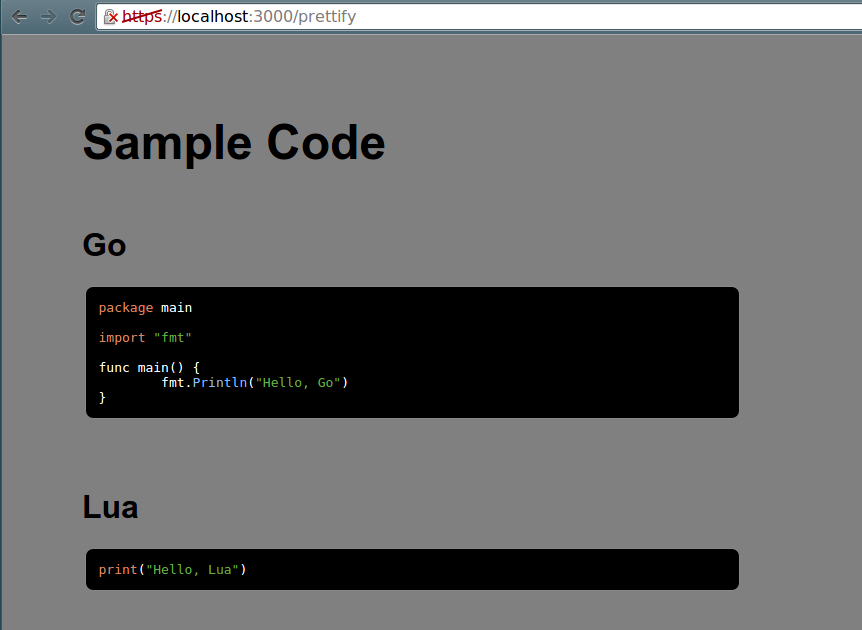 Screenshot of the prettify sample. Served from a single Lua script. 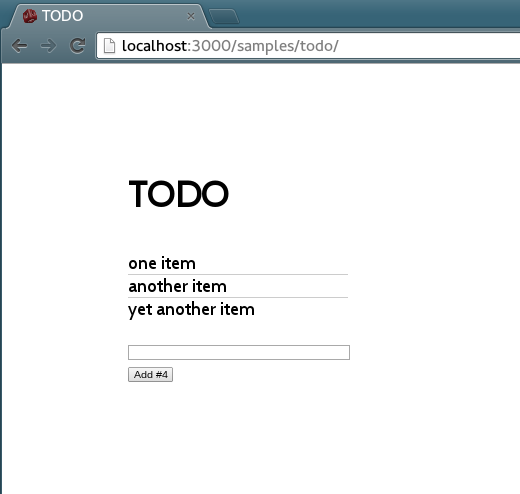 JSX transforms are built-in. Using React together with Algernon is easy.

The sample collection can be downloaded from the samples directory in this repository, or here: samplepack.zip.

This enables debug mode, uses the internal Bolt database, uses regular HTTP instead of HTTPS+HTTP/2 and enables caching for all files except: Pongo2, Amber, Lua, Sass, GCSS, Markdown and JSX.

Then try creating an index.lua file with print("Hello, World!") and visit the served web page in a browser.

Enable HTTP/2 in the browser (for older browsers)

Configure the required ports for local use

Prepare for running the samples

Create your own Algernon application, for regular HTTP

Create your own Algernon application, for HTTP/2 + HTTPS

These functions can be used in combination with the plugin functions for storing Lua code returned by plugins when serverconf.lua is loaded, then retrieve the Lua code later, when handling requests. The code is stored in the database.

Lua functions for the file cache

Lua functions that are available for server configuration files

Functions that are only available for Lua server files

This function is only available when a Lua script is used instead of a server directory, or from Lua files that are specified with the ServerFile function in the server configuration.

Commands that are only available in the REPL

Algernon can be used as a quick Markdown viewer with the -m flag.

Try algernon -m README.md to view README.md in the browser, serving the file once on a port >3000.

In addition to the regular Markdown syntax, Algernon supports setting the page title and syntax highlight style with a header comment like this at the top of a Markdown file:

Code is highlighted with highlight.js and several styles are available.

The string that follows replace_with_theme will be used for replacing the current theme string (like dark) with the given string. This makes it possible to use one image (like logo_default_theme.png) for one theme and another image (logo_dark.png) for the dark theme.

The theme can be light, dark, redbox, bw, github, wing, material, neon, default, werc or a path to a CSS file. Or style.gcss can exist in the same directory.

An overview of available syntax highlighting styles can be found at the Chroma Style Gallery.

First make Algernon serve a directory for the domain, like /srv/mydomain.space, then use that as the webroot when configuring certbot with the certbot certonly command.

Remember to set up a cron-job or something similar to run certbot renew every once in a while (every 12 hours is suggested by certbot.eff.org). Also remember to restart the algernon service after updating the certificates. A way to refresh the certificates without restarting Algernon will be implemented in the future.

Serve files in one directory:

Then visit the web page once, to create one entry in the access.log.

The wonderful goaccess utility can then be used to view the access log, while it is being filled:

If you have goaccess setup correctly, running goaccess without any flags should work too:

.alg files are just renamed .zip files, that can be served by Algernon. There is an example application here: wercstyle.

Thanks to Egon Elbre for the two SVG drawings that I remixed into the current logo (CC0 licensed).

Listening to port 80 without running as root