Sawppy the Rover: A Motorized Model of Mars Rover Curiosity and Perseverance for <$500 In Parts

Sawppy is a motorized model of Mars rovers Curiosity and Perseverance. It faithfully reproduces the Rocker-Bogie suspension kinematics of real rovers and is intended to be a hardware platform for future software projects in autonomous operation. Go forth and boldly explore the back yard, Sawppy!

All information for building Sawppy is free and public open source for anyone to build their own. Build instructions can be found under the docs subdirectory.

Sawppy the Rover was inspired by JPL's Open Source Rover project. Most of the differences between Sawppy and its JPL inspiration were motivated by a desire to reduce cost and complexity. JPL's rover is designed for education, to be assembled by a school team and give a robust foundation for structured curriculum. Sawppy is more suited for individual hobbyists like myself who are happy to tinker and willing to make some trade-offs to lower cost.

The budget was $500, see price breakdown here. Getting to that price point required the following changes:

These two major design goals can be summarized as: Servo Actuated Wheels, Printed Interconnect For Extrusion. The acronym SAWPIFE led to the nickedname "Sawppy".

This milestone includes a motorized rolling chassis that is mechanically functional. The remaining areas (electrical, software, etc.) are still very immature, just barely enough to validate mechanical chassis function. Click this image for a YouTube video illustrating the chassis in action, climbing a backpack that is almost double the height of wheel diameter. 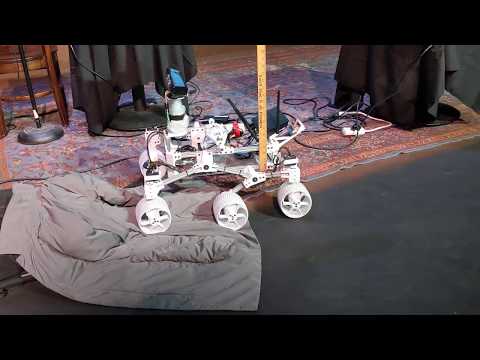 Sawppy has received only minor mechanical changes for this milestone, including the rocker joint angle limiter visible in action in the backpack demo video above. Most of the attention has been on software, with contributions by the Sawppy community.

A Sawppy builder can now choose from many Sawppy software options. Roughly in order of power and complexity, they are:

Plus two options for turning Sawppy into a ROS robotics platform.

Many people who built their own Sawppy rover are also people who love to tinker and experiment. As a result these rovers reflect the individuality of their builder. Some of these builders have shared their work with the community, see the modifications folder for more information.

Sawppy is shared free of charge, but builders in the United States may choose to buy some parts via Amazon affiliate links which will send a small sales commission to Sawppy's creator.

Sawppy the Rover: A Motorized Model of Mars Rover Curiosity and Perseverance for <$500 In Parts