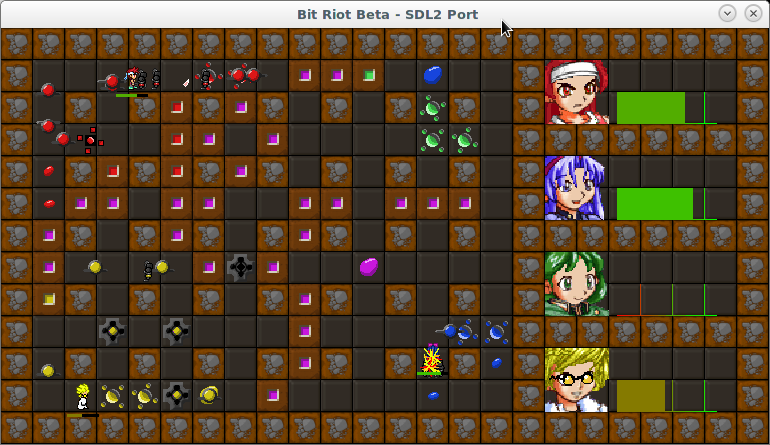 This game is a re-implementation of 'BugBomber' - a great Amiga game that is similar to Bomberman but with a twist of being able to spawn your own helper robots. I found the code for BitRiot when I was searching to see if anyone recreated bomberman. It was built by one guy as a university project and posted to a forum.

It was original built against the win32 API, and I figured I'd like to learn the difficulties in porting a game from win32 to something Linux native. I wasn't quite ready to jump into OpenGL / 3D APIs, so I took the approach of porting to SDL 1.2.x with normal software blitting.

I contacted the original author and they were happy for me to work on this code. When I asked about licencing they said they would have licensed it as something free "like Apache", hence the Apache Software License now added to the source code!

Thanks to contributors, the game now supports SDL2 and game controllers!

There are also older versions of the game code working with SDL 1.2.x, and an even older version that was originally written against win32 + directdraw. Note that tags before sdl2 are not maintained and do not have the fixes the SDL2 version contains.

Here's an example of the tagged releases:

The master branch typically has the latest stable sdl2 code. It may or may not advance further as I don't have as much time to spend on this as I'd like. That being said, I'm very open to any contributions. Contributions to this code base are what enabled SDL2 support in the first place.

The newest SDL2 version (v1.39) now supports a larger map option on startup (-b), fullscreen (-f), game controllers (plus rumble support) and hot joining (take over from CPU player), and an initial implementation of a main menu. 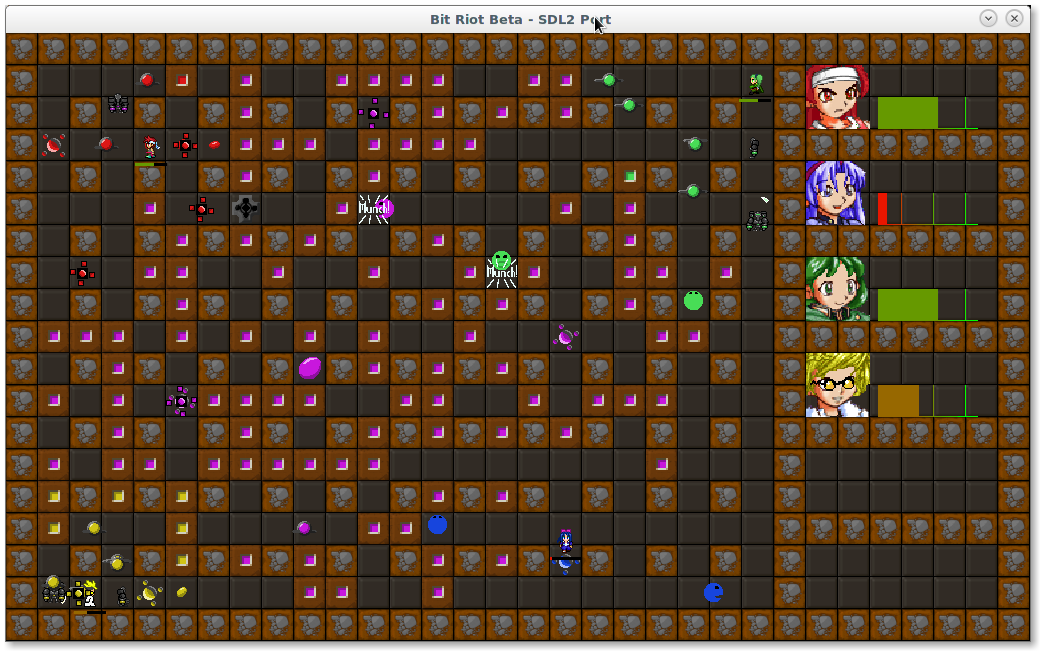 The 'develop' branch should contain the latest development code for BitRiot, stability is not the primary concern of this branch. The 'master' branch should have somewhat stable / tested code within it. If you are looking to branch to add features, please fork and branch from 'develop' and file pull requests back to that branch, I'm thankful for any contributions you can make.

Things that I'd like to do, but likely won't ever find time for (in order of personal interest). Note if the top two items are completed I'll remove the 'Beta' tag from the game title:

Please note: If you'd found the original BitRiot release anywhere, you might notice the artwork in this one was different. This was only done out of safety incase there were any concerns over the artwork included in the original release.

To build the game, first make sure you have the necessary dependencies installed on your system. The main master branch is now using SDL2 and libRocket. Assuming you are compiling this branch, you will need: CMake 3.4.3, SDL 2.0.x, SDL2_mixer and SDL2_ttf, SDL2_image, libRocket v1.3+.

Get and build libRocket first, as we use it for our menuing system.

Now get the BitRiot code and build it, link to the menu assets, and run BitRiot